Canada Free Press (CFP) author David Singer suggests tapping into that nearly $14 BILLION in aid be withheld and use at least a portion of it to build the Border Wall.

If President Trump can legally redirect foreign aid, then the President should thumb his nose at hate-Trump Dems and BUILD THAT WALL! 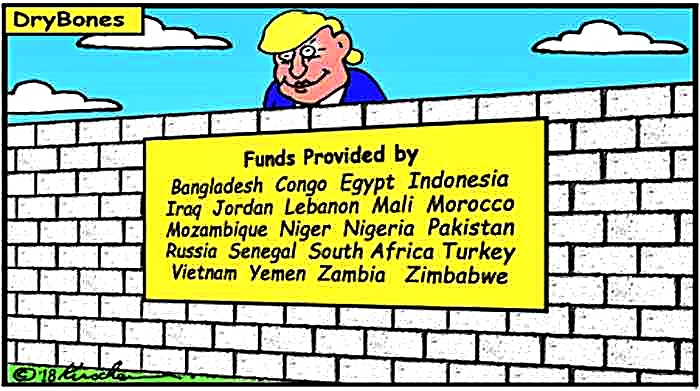 21 Nations that received almost $14 billion in US foreign aid in 2017 could become the key to unlocking the White House confrontation between President Trump and Democrat leaders Nancy Pelosi and Chuck Schumer over their refusal to commit the Democrats to authorizing Congress to commit $5 billion immediately towards the construction of Trump’s border wall to prevent illegal immigration into America.

Trump’s threatened Government shutdown by 21 December has been withdrawn as he seeks alternative sources of funding.

These 21 states were major players in humiliating Trump – when an American sponsored resolution in the United Nations General Assembly seeking to condemn Hamas and other militant groups for indiscriminately targeting Israel’s predominantly Jewish civilian population since 2007 failed to secure the required two-third’s majority earlier determined as necessary for its passage.

Trump has warned on many occasions that those who receive money from America—yet do not support America diplomatically—stand to lose financially as a result.

Trump has already ominously warned those countries that humiliated him on the Hamas Resolution that they could be in the firing line for reductions in their annual foreign aid as a result of not voting with America.

This threat becomes increasingly more likely as the Democrats dig in their heels and refuse to give the President the $5 billion he needs to build the border wall—one of the President’s cardinal promises made in the 2016 election campaign that has been frustrated by the Democrats from the day Trump became President.

Trump should be readily able to determine how $5 billion of this $14 billion funding to these recalcitrant states can be redirected to building the border wall.

Trump can also look at defunding:

Jordan and Egypt—in addition to not voting with America—apparently continue to resist Trump’s efforts to replace the Palestine Liberation Organisation in negotiations with Israel on Trump’s peace proposals. Their aid could be substantially reduced by a clearly-piqued and very angered Trump.

The ball is now well and truly in the Democrats hands.

If the President does not secure the border wall funding from Congress—then those countries that humiliated Trump could well see their foreign aid in 2019 slashed from their 2017 levels.

Trump is determined to protect America against illegal immigration—and no one will be allowed to stand in his way of making America great again.

Author’s note: The cartoon—commissioned exclusively for this article—is by Yaakov Kirschen aka “Dry Bones”—one of Israel’s foremost political and social commentators—whose cartoons have graced the columns of Israeli and international media publications for decades. His cartoons can be viewed at Drybonesblog

David Singer is an Australian Lawyer, a Foundation Member of the International Analyst Network and Convenor of Jordan is Palestine International—an organization calling for sovereignty of the West Bank and Gaza to be allocated between Israel and Jordan as the two successor States to the Mandate for Palestine. Previous articles written by him can be found at: jordanispalestine.blogspot.com

Pursuant to Title 17 U.S.C. 107, other copyrighted work is provided for educational purposes, research, critical comment, or debate without profit or payment. If you wish to use copyrighted material from this site for your own purposes beyond the ‘fair use’ exception, you must obtain permission from the copyright owner. Views are those of authors and not necessarily those of Canada Free Press. Content is Copyright 1997-2018 the individual authors. Site Copyright 1997-2018 Canada Free Press.Com