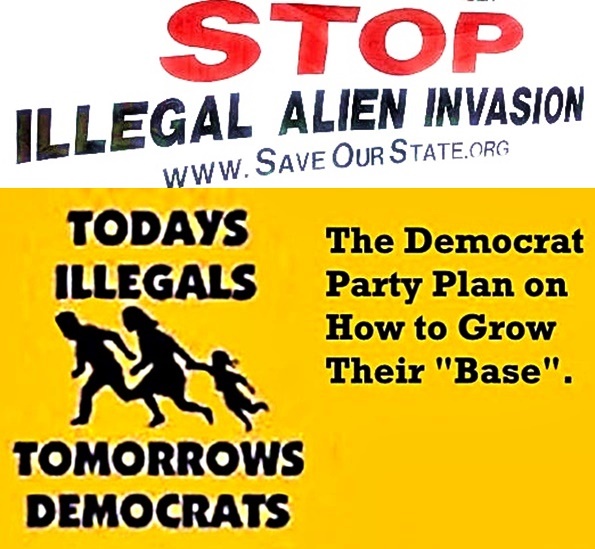 A Crisis On Our Southern Border

Our southern border is being breached and overrun at will, and there is a hard, factual crisis unfolding there, despite a temporary decline in illegal aliens captured at the border between 2006 and 2014 due to an economic downturn. Even some of the most hardcore anti-American Democrats and former Obama officials are hard-pressed to deny that this crisis actually exists, although it seems there isn’t any number of illegal aliens swarming across the border that is large enough to move them to act proactively to secure the border and ensure U.S. sovereignty, national security and the individual economic and physical safety and security of all Americans.

With illegal alien entries occurring at their highest rate since 2007, adding to the 30-40 million illegals already here, America has essentially lost effective control over the Mexican-U.S. border, and the current invasion of Illegal Aliens, coming in one massive caravan after another, is on track to push 1.5 million illegal aliens into America this year, in part by way of a semantic deception that calls them “refugees”. This deception is part and parcel of the Democratic Party’s agenda and it is ongoing and in opposition to a majority of Americans who want the illegals deported. Unfortunately, communist activist courts at the federal level, such as the 9th Circuit Court, have also made this next to impossible.

Between 2000 and 2006, there was a consistent flow of over one million Illegal Aliens into America, with one year hitting over 1.6 million. That was just the numbers that were detected and returned across the border. One must understand that similarly large numbers are going undetected.

Reported by the Department of Homeland Security on March 6th, America can see that in February 76,000 illegal aliens were caught at U.S. ports of entry; the Border Patrol has caught 268,000 illegal aliens since the beginning of the fiscal year, a 97% increase above last year’s numbers; apprehensions of Family Units and Unaccompanied Alien Children have increased 338%; just last month, the Customs and Border Protection agents seized the largest illegal shipment of fentanyl ever recorded — more than enough to kill 115 million Americans. With the detention facilities at 283% capacity, some illegal aliens were actually temporarily sheltered under a bridge in El Paso, Texas. And, it has recently also been revealed that 4000 illegal aliens were caught trying to cross in one day, on March 26th 2019.

Jeh Johnson, former Secretary of Homeland Security, recently stated: “I know that a thousand (a day) overwhelms the system. I cannot begin to imagine what 4,000 a day looks like, so we are truly in a crisis.”

Even Senator Bernie Sanders (I-Vt), “Big Red” himself, had to reluctantly acknowledge that a crisis exists, but he hedged his words with the usual anti-American tripe, as he suggested that somehow it was the U.S. border policies that were less than humane. Sanders, a 2020 presidential candidate, told ‘Face the Nation’ there is a “terrible humanitarian crisis” at the southern border, as he added, “We need to make sure that our borders are secure, but also we need a humane policy at the border.”

Mark Morgan, Obama’s Border Patrol chief, told Maria Bartiromo (Mornings With Maria/Fox Business News): “It’s absolutely an emergency … ICE doesn’t have any more room. … (they) are having to release illegal aliens into … the United States … (and) because of our asylum laws, they step one foot on American soil, they are allowed in never to be heard from again.”

Secretary Kirstjen Nielsen says eighty percent of asylum seekers pass the first interview, although only 20 percent ever receive asylum. Nielsen further asserts the people refused asylum are “flat-out fraud[s]” or they are here for economic reasons or to be united with family.

It’s also worth noting, in 2018, the federal government reviewed tens of thousands of mostly Chinese immigrants’ asylum statuses. The government was primarily focused on “asylum mills” and groups of lawyers who bragged about coaching migrants from years ago, so they could “fraudulently obtain asylum in Manhattan’s Chinatown and in Flushing, Queens.”

These are the policies that allowed twice deported illegal alien Jorge Rios to keep returning to America. Rios, an illegal alien from Honduras, was recently arrested on March 31st for the murder of a New Jersey nanny. And if there’s blame to be placed, place it on Rios and the Democrats, such as Speaker Pelosi and Senator Chuck Schumer who have continuously pushed the Open Borders agenda for political gain,  and RINOs, such as Speaker Paul Ryan who kept diverting the President from the border emergency to keep the cheap labor pools growing, when the Republicans had the majority and could have done something effective; in some respects, both parties have failed the nation on this issue.

Recently, Department of Homeland Security Secretary Kirstjen Nielsen implored Congress “to act ASAP to give DHSGOV the authorities we need to protect children from the terrible journey, discourage illegal immigration, and secure our border“. She added, “Failure to act is putting lives at risk — especially children who are exploited … and … ‘recycled’ by smugglers / bad guys [who] know our outdated laws and [use] children as a ‘free ticket’ into America … without a legal fix and additional resources, there will be no end to the crisis“.

Fortunately, President Trump’s National Emergency declaration withstood Democrat and RINO attempts to override it, in the face of such an obvious emergency. And for those who struggle with their native English language, in the manner of the Speaker and Senate Minority Leader, “emergency” is defined by Merriam-Webster as “an unforeseen combination of circumstances or the resulting state that calls for immediate action … an urgent need for assistance or relief.”

On Friday March 29th, President Trump noted that Mexico can stop illegal aliens from crossing our southern border, if they choose to do so. The President said: “If they [Mexico] don’t stop [illegal aliens], we’re closing the border. They’ll close it. And we’ll keep it closed for a long time. I’m not playing games.”

This was followed by the President’s orders to halt financial aid to these countries that are not discouraging the hordes of illegal aliens, such as El Salvador, Guatemala and Honduras. On Saturday March 30th, the State Department acknowledged that it was moving to withhold approximately $700 million in aid to the three Northern Triangle Countries.

Virtually every single Democrat is mounting a hue and cry against cutting aid to these countries and closing the border, as they describe the economic damage it will do to the Northern Triangle Countries and Mexico, as well as our own. However, noting that these migrants were already facing “deplorable” conditions,  Kellyanne Conway stated: “This is a classic case of what may happen … versus what’s right in front of us. We are over the melting point.”

Several more caravans are forming to send 20,000 to 40,000 more illegal aliens to America, in the wake of the 8,000 member Honduran caravan that not so long ago refused Mexico’s offer of asylum and jobs. Just like Europe’s illegal aliens flooding their countryside hoping to make it to Germany or Great Britain, the Triangle Country illegals know where the largest welfare checks are to be found. America can’t afford either free immigration or a welfare state, and it won’t survive both.

Closing the border is a drastic measure that would have immediate consequences for trade and commerce between the United States and Mexico. Mexico is America’s third largest trading partner, with approximately $611 billion in cross-border trade last year, according to the Commerce Department.

For each complex problem there exists answers that are clear, simple and wrong, such as Democrats insistence that all who arrive at the border be given immediate entry and legal legitimacy too, even to the point of voting in U.S. elections without being a U.S citizen. These red, radical anti-American Democrats, such as Julian Castro, former mayor of San Antonio, Texas and a 2020 presidential candidate, would totally eradicate 8 U.S. Code 1325 if they could, which would decriminalize unlawful entry, failure to depart the country, fleeing immigration checkpoints, marriage fraud and commercial enterprise fraud. And obstinate as a rock, they refuse to even admit there is an obvious problem, as they turn a blind-eye to the endless stream of humanity, the dregs of Central America, trying to force their way into America, even as they wave foreign flags.

President Trump recognizes the crisis and a problem he says can be fixed by Congress “in 45 minutes”, and his recent actions have put all involved on notice that this problem will be resolved or the problem nations will suffer economically. So too will it bear some economic cost to America, but a little pain now is much preferable to the complete destruction of our nation later. He should absolutely refuse to surrender America’s immigration policies to anti-American Congressmen and foreigners, and he must pursue the complete closure of the southern border, if that’s what it takes to force Congress to come to its senses on this issue. Extraordinary circumstances require extraordinary measures, in the name of the security and sovereignty of the United States and humanity.

Source links are by the Editor.