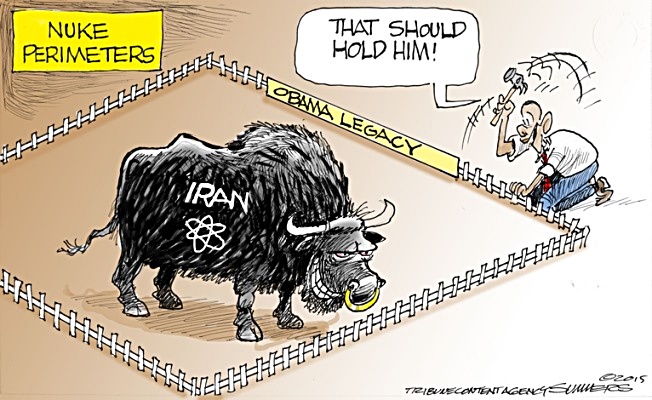 President Barack Hussein Obama believes his will is absolute in his agenda. That is the only explanation for attitudes such as “I have a pen and a phone and I know how to use them” as well as the warning that he will “veto” any Congressional action against his Nuke Iran Deal. In order to get public support he is employing a political tactic he used to get elected in 2008 and 2012 and to whip up voter support from the beginning of his Presidency right on through the present: HE LIES.

The Constitutional recourse against this despotic President is embodied in the first words of the U.S. Constitution: WE THE PEOPLE.

The President… shall have Power, by and with the Advice and Consent of the Senate, to make Treaties, provided two thirds of the Senators present concur….

From the Heritage Foundation:

The Treaty Clause has a number of striking features. It gives the Senate, in James Madison’s terms, a “partial agency” in the President’s foreign-relations power. The clause requires a supermajority (two-thirds) of the Senate for approval of a treaty, but it gives the House of Representatives, representing the “people,” no role in the process.

Midway through the Constitutional Convention, a working draft had assigned the treaty-making power to the Senate, but the Framers, apparently considering the traditional role of a nation-state’s executive in making treaties, changed direction and gave the power to the President, but with the proviso of the Senate’s “Advice and Consent.” In a formal sense, then, treaty-making became a mixture of executive and legislative power. Most people of the time recognized the actual conduct of diplomacy as an executive function, but under Article VI treaties were, like statutes, part of the “supreme Law of the Land.” Thus, as Alexander Hamilton explained in The Federalist No. 75 … (Treaty Clause – Heritage Guide to the Constitution; By Michael D. Ramsey; Heritage Foundation)

It is doubtful that the U.S. Senate would ratify a Nuke Deal with Iran such as currently negotiated with Iran. So how does Obama make the Deal a done deal? By using the Legalese of an Executive Order that does not need Senate approval:

How can Obama sign a nuclear arms deal with Iran without submitting that agreement to the Senate?

The same way that Obama has rewritten federal immigration and education law without Congress: by expanding executive power.

Obama will claim that his deal with Iran is not a treaty but a “sole executive agreement” that requires no approval from Congress. Sole executive agreements have been used by presidents since the early 1800s, but the exact scope of this power has long been in question. The Supreme Court has allowed many such agreements to stand (e.g. Dames & Moore v. Regan or American Insurance Ass’n v. Garamendi), but the Court has always required at least some evidence that Congress at least acquiesced to those policies.

The sole executive agreement power has also been used to end formal arms treaties, most recently by President Bush in 2001 when he unilaterally exited the Anti-Ballistic Missile Treaty with Russia. However, new arms deals have almost always been submitted to the Senate for approval, including Bush’s 2002 Strategic Offensive Reductions Treaty with Russia. (How Obama Will Bypass Congress On His Iranian Nuclear Arms Deal; By Conn Carroll; Townhall.com; 3/3/15)

According to the analysis of Congressional options on overriding an Obama Nuke Deal Executive Order with Iran, the deal is subject to a – for or against – Resolution from Congress. It is likely Congress’ Joint Resolution under a Republican Congress will be disapproval. However, under the Obama promise to veto any Joint Resolution throwing a monkey wrench in Obama’s Nuke Deal Executive Order. This means instead of the Senate needing a 2/3 majority to ratify a treaty, both Houses of Congress can only override an Obama veto with BOTH Houses drumming a 2/3 vote:

Now that more than a year and a half of nuclear negotiations are in the books, attention on a signature legacy item for President Barack Obama now shifts to Congress.

Here’s a brief overview of what happens next:

· Once Congress receives the details of the deal, it will have 60 days to debate and vote on it, according to the terms of the law Obama signed in May. A GOP congressional aide told Business Insider that it has not yet received the details.

· If Congress sends a joint resolution of disapproval to Obama (meaning both chambers of Congress disapprove of the deal), it would trigger a new timeline. He would have 12 days to veto the resolution. That’s likely, considering his promise Tuesday morning to veto anything that would hamper the deal’s implementation.

· Following an Obama veto, Congress would have 10 days to vote to override his veto, which would require a two-thirds majority of both chambers of Congress.

· If both chambers vote to override, it would prevent Obama from suspending sanctions on Iran related to its nuclear program.

So now we come back to Founding Father original intention of WE THE PEOPLE. Make sure you write or call District Congressman and both of your Senators. Even if you have a Republican in the Congressman-Senator categories, make sure you write in case they are a RINO. If you have a Democratic Party Congressman and/or Senator you need to participate in a massive inundation of persuasive letters to let them know that agreeing with America’s despot-in-chief Obama will cause you to VOTE against them in their reelection bid in the next voting cycle. Unless of course you actually want to join America’s lying President in making our Middle Eastern ally Israel have an existential threat AND have crazy Twelver-Shi’ite (See HERE and HERE) nuclear armed warhead intercontinental ballistic missiles (ICBMs) aimed at the USA (See HERE and HERE).

Thanks to Paul Sutliff I became aware of a big rally is being planned and scheduled to occur in New York City on Wednesday July 22 to protest Obama’s Nuke Deal with Iran. NYC is a good beginning place but you people with organizing skills should organize a local version in your area. Contact local Tea Party organizations, local ACT for America chapters, Stop Islamization of America/American Freedom Defense Initiative organizers active in your area and/or any other organization that understands how completely deplorable this Iran deal is for American National Security. Contact your local Congressman and Senators with an invitation to a scheduled event. Perhaps that Congressman and Senators would be amiable to help in organizing the protest thus insuring media coverage.

Here is a list of Conservatives, Pro-Israel, Counterjihad and National Security speakers participating in the NYC rally on Wednesday:

Our mission is to educate our countrymen on the dangerous accord being negotiated today in Geneva that will soon be put up for a vote in Congress.

1. An end to the farce being perpetrated against the American people with a pending deal which will endanger America and our allies.

2. A restoration of the ORIGINAL demands – NO nuclear military capability, NO centrifuges and authority for any and all unannounced inspections of all known and any future facilities discovered.

If you are like and too far to attend there is a way to show your support for this rally. You can join the Facebook Page Stop Iran Now. Here is an excerpt from that Facebook page which includes the numerous organizations that have placed their names in support stopping Iran NOW:

The direct goal of the gathering is to alert the American public of the danger concerning the negotiations with Iran and the terrible conclusions we expect. We all must come together as one united nation to protect the security and safety of our country and closest allies.

We will be addressing engaging lawmakers on the following criteria that will shape a good agreement that truly blocks all Iranian pathways to a nuclear weapon:

• Dismantling of all existing centrifuges

Sponsored by The Jewish Rapid Response Coalition (JRRC) In Partnership With:

*The Event Chairs of the Coalition to Stop Iran*

Here is the page that Paul Sutliff sent to me via email which a report on the event occurring in two day.

Yesterday’s agreement should be an opportunity for most GOP presidential candidates to show up. 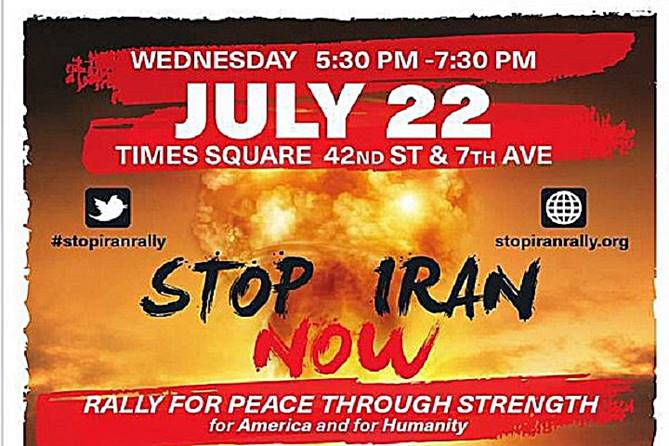 A mass rally that might attract tens of thousands of people is scheduled for next Wednesday 5:30 p.m. (EDT) at Times Square in New York City.

Police have planned for thousands of people to show up, but Tuesday’s agreement with Iran and the explosive opposition from Israel and the Jewish community in the United States is likely to draw much larger crowds.

The long-rage forecast is for temperatures in the 80s (Fahrenheit) and a 50 percent chance of scattered thunderstorms.

Speakers at the rally include:

James Woolsey, former Director of the CIA and Chairman of the Foundation for Defense of Democracies; and Mortimer Zuckerman, chairman and editor-in-chief of U.S. News & World Report and the publisher of the New York Daily News and former Chairman of the Conference of Presidents of Major American Jewish Organizations.

The rally organizers have stated that their mission is:

— an end to the farce being perpetrated against the American people with a pending deal which will endanger America and our allies;

— restoration of the ORIGINAL demands – NO nuclear military capability, NO centrifuges and authority for any and all unannounced inspections of all known and any future facilities discovered; and

–providing an understanding that a failure to STOP IRAN NOW will necessitate a military response later.

Iran WMD to the Left and Right of US

About the Author: Tzvi Ben Gedalyahu is a graduate in journalism and economics from The George Washington University. He has worked as a cub reporter in rural Virginia and as senior copy editor for major Canadian metropolitan dailies. Tzvi wrote for Arutz Sheva for several years before joining the Jewish Press.