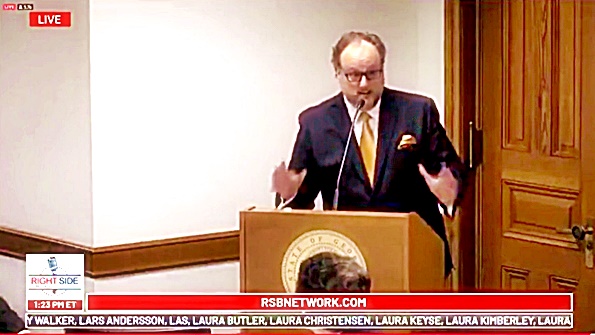 I actually watched a Twitter video of Jovan Hutton Pulitzer testifying before a Georgia State Senate panel providing a live demonstration of hacking into a functioning Dominion voting machine operating for early voting in Georgia yesterday (12/30). I am pleased to have discovered a Conservative Firing Line post today posting a Rumble video of the Pulitzer exposé of how corrupt Dominion software is. WHICH also demonstrates the lies of Dominion, Dem-Marxists, treasonous Republicans (ahem … in this case Georgia’s Governor and Secretary of State) and the Mainstream Media (MSM).

I need your generosity via – credit cards, check cards

Or support by getting in the Coffee from home business making yourself extra cash – OR just buy some FEEL GOOD coffee, that includes immune boosting products. Big Tech Censorship is pervasive – Share voluminously on all social media platforms!

Officially, to make them secure, voting machines are not supposed to have internet access. So how does one witness claim to have two-way communication with one of these ‘secure’ machines?

More importantly, since these are the very same machines that have been the center of so much controversy in November, what does that say for all the assurances we’ve been given about how tamper-proof THEY were supposed to have been?

Our readers will recognize this witness, Jovan Hutton Pulitzer of the Gold Institute of International Strategy. He’s the guy behind QR codes who has tech that can digitally differentiate between legit and bogus ballots. We’d love to see his tech unleashed on ballots in every state in the country, but that’s a different issue entirely.

Here, he’s been doing the work of a white-hat hacker, looking for weaknesses that can be exploited to overturn an election that has SO very much riding on it.

Rumble — Inventor Jovan Hutton Pulitzer was in front of the Georgia Senate today and he totally destroyed Georgia’s 2020 election results.

Pulitzer confirmed that the Georgia runoff IS connected to the internet.

He established a two-way communication from a polling pad in a voting center.

“At this very moment at a polling location in the county, not only do we have access through the devices to the poll pad–the system, but WE ARE IN,” Pulitzer said.

“That’s going on right there where everyone is voting in the Georgia runoff.”

Weird, isn’t it, how someone can hack into tech that supposedly isn’t connected to the internet?

Then Georgia State Sen. Blake Tillery commented. “We’ve heard that there’s three different types of machines: a scanner, a ballot marking device, and a polling ad. Do you know which one it is communicating?”

“Right now—which we heard in the the past was coming through the thermostat and stuff—this is now a more direct access wave, so this is coming through the polling pad device where they’re checking everything,” Pulitzer answered. “But now, you know, it only takes one device where you daisy chain them together and do it. The most important thing is that it shouldn’t be doing and even shouldn’t be accessible. And it’s there.”

Another questioned: “What effect could somebody with dishonest purposes—what could that person do given this access that’s going on in Fulton County?”

Statistically, Pulitzer suggested, what could be occurring with an operation as described: As that data is being exchanged, somebody can siphon off that data, modify it, and feed the information right back into the system. —POSTMILLENIAL

Gee, and these voting systems just happen to be the same super-secure design that was shut down in the middle of the night with Trump leading on election night only to have him trailing badly the next morning?

‘Remotely.’ Now that’s an interesting turn of phrase, under the circumstances, isn’t it?