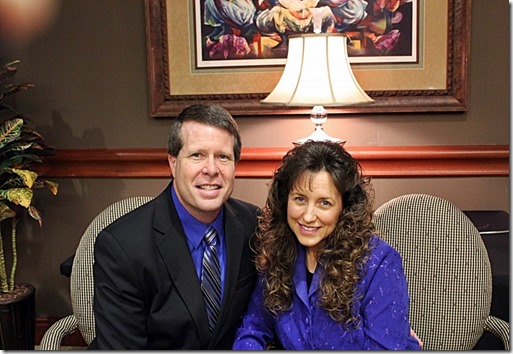 Do you know who Jim Bob and Michelle Duggar are? If you do then good, you’ll already have an inkling about the nature of this post. Admittedly I never heard of them until I received an American Family Association (AFA) email alert about them. Evidently the Duggars – including their 19 children – are the stars of a family reality show on the TLC Network.

Duggars are a faith based family. Being Christians supporting Christian morality drives atheists, Leftists and – wait for it– homosexuals very apoplectic. Michelle Duggar has gone on record protesting a city ordinance in Fayetteville, Arkansas that allows transgender men in the Lady’s room in public places. And the real fits began against the Duggars when Michelle stuck to her Christian principles and got involved in some grassroots lobbying with robocalls condemning the Fayetteville ordinance.

Homosexual activists became so annoyed with Michelle Duggar that they began a Change.org petition to have the Duggar reality show “19 Kids and Counting” removed from the TLC Network line-up.

This is another example of the Left Wing war on Christians, particularly against traditional Biblical based Christians that adhere to Christian morality. The propaganda from the Left and Homosexual activists that Christian morality is aberrant and offensive belief system in the 21st century.

It is both sad and joyous that America is in a day when homosexuals can call Christians an aberrancy and an offensive group of people. It is sad because Christianity is one of the hallmarks of America’s exceptionalism even as far back as colonial days. It is joyous because when society voluntarily falls away from the Christian faith it is one of the evidences of a soon return of Jesus Christ the Son of God to govern the entire planet as King of kings and Lord of lords.

3 Now as He sat on the Mount of Olives, the disciples came to Him privately, saying, “Tell us, when will these things be? And what will be the sign of Your coming, and of the end of the age?”

9 “Then they will deliver you up to tribulation and kill you, and you will be hated by all nations for My name’s sake. 10 And then many will be offended, will betray one another, and will hate one another. 11 Then many false prophets will rise up and deceive many. 12 And because lawlessness will abound, the love of many will grow cold. 13 But he who endures to the end shall be saved. (Matthew 24: 3, 9-13 NKJV)

1 Now, brethren, concerning the coming of our Lord Jesus Christ and our gathering together to Him, we ask you, 2 not to be soon shaken in mind or troubled, either by spirit or by word or by letter, as if from us, as though the day of Christ[a] had come. 3 Let no one deceive you by any means; for that Day will not come unless the falling away comes first, and the man of sin[b] is revealed, the son of perdition, 4 who opposes and exalts himself above all that is called God or that is worshiped, so that he sits as God[c] in the temple of God, showing himself that he is God.

9 The coming of the lawless one is according to the working of Satan, with all power, signs, and lying wonders, 10 and with all unrighteous deception among those who perish, because they did not receive the love of the truth, that they might be saved. 11 And for this reason God will send them strong delusion, that they should believe the lie, 12 that they all may be condemned who did not believe the truth but had pleasure in unrighteousness.

13 But we are bound to give thanks to God always for you, brethren beloved by the Lord, because God from the beginning chose you for salvation through sanctification by the Spirit and belief in the truth, 14 to which He called you by our gospel, for the obtaining of the glory of our Lord Jesus Christ. 15 Therefore, brethren, stand fast and hold the traditions which you were taught, whether by word or our epistle. (2 Thessalonians 2: 1-4, 9-15 NKJV)

Truthfully I doubt that I will ever watch the Duggar family reality show on TLC; but I can’t sit here and not do anything to stand against homosexual bullying of Christians and the opinions of Christians. The AFA email has link to their November 21 post of a petition. There are other supportive petitions to sign as well. Dear God sign every petition that supports the Christian faith above making ungodliness an accepted practice.

The Duggar family is counting on you

In a short time, we will be sending our petition signed by hundreds of thousands of good people, who refuse to be bullied by a noisy group of angry homosexual activists.

The Duggar family is standing firm on God’s word that marriage is sacred and can only be defined as God intended – one man and one woman. They (and we) would love to know you stand with them!

The cruel and hateful rhetoric coming from the liberal left against the Duggar family has been relentless, and their campaign strategy is always the same – attack everyone who disagrees with their unnatural view of same-sex “marriage.”

Can we count on you to stand with the Duggars by signing the petition to TLC, urging them to keep “19 Kids and Counting” on the air?

Support the Duggars by signing the petition to TLC now!

TLC needs to know you support the Duggars and 19 Kids and Counting. If TLC hears from enough viewers, they will not even consider canceling the show.

Help us reach our goal of 1,000,000 signatures by Christmas. Add your name to the petition today!

TLC stays mum on call for 19 Kids and Counting cancellation; 200,000 sign petition to keep the show

TV network TLC is staying silent in the battle of petitions over the future of reality TV show 19 Kids and Counting.

Pro-gay advocates have been calling for the show’s cancellation via a petition on the Change.org website, but their efforts have triggered a groundswell of support for the Duggar family from others who support their position on sexuality.

The Change.org petition was launched back in August attacking Michelle Duggar’s “fearmongering” and “hatred” after she publicly challenged an ordinance in Fayetteville, Arkansas, that would have allowed transgender women to use female restrooms.

It was also critical of the oldest son of Michelle and Jim Bob Duggar, Josh, because of his involvement with the conservative think tank, Family Research Council.

“Duggar words reek of ignroance and fear mongering. Just because someone is transgendered doesn’t mean they are a child predator or a rapist. The claim that this ordinance would provide predators with access to women’s restrooms in order to assault or leer at girls or women is nothing more than fear-mongering and spreading ignornace and hatred,” it read.

It has been signed over 170,000 times, and signatures spiked in recent weeks when it was widely publicised on entertainment media outlets.

The petition defending the family, launched a week ago on the LifeSiteNews website, has been signed by over 204,000 times.

“The Duggar Family is under attack from anti-marriage advocates for standing for traditional marriage,” the petition says.

“We commend The Duggar Family for their brave stand in defending marriage as ordained by God between one man and one woman. No individual’s sexual behavior and chosen lifestyle has the right to redefine marriage.

Its supporters include senator Rick Santorum, who told the website that the Duggars were “a wonderful family, and Karen and I support them and encourage folks to stand with the Duggars against these ridiculous attacks from the left”.

The Christian Post said it had contacted TLC for its reaction to the petitions and a spokesperson said they had no comment to make on the matter.

The Duggar family is counting on you

TLC stays mum on call for 19 Kids and Counting cancellation; 200,000 sign petition to keep the show