The American Left as represented by the Left Stream Media and Democrats particularly the sore loser Crooked Hillary, have been doing their best to frame President-Elect Trump’s victory with a crushing 306 awarded Electoral Votes is the result of “Fake News”.

In my book the Left is doing its best to delegitimize Donald Trump as President of the United States. And since the Left is trying to persuade their clueless voters to be angry against Trump’s voters, you must ask – WHY?

I haven’t heard or read anyone come to the conclusion I have arrived at, but hear is my simple Conservative voter reasoning. The Dems are setting the groundwork to censor Conservative Social Media and Conservative bloggers who do not tow the Leftist public agenda that is pushed by the Left Stream Media as “Real News”.

I have a couple of articles for you to read that I am certain the American Left will step up to the stump and holler Fake News with the sole purpose of influencing people to not consider an alternative view that Hillary Clinton is CROOKED. 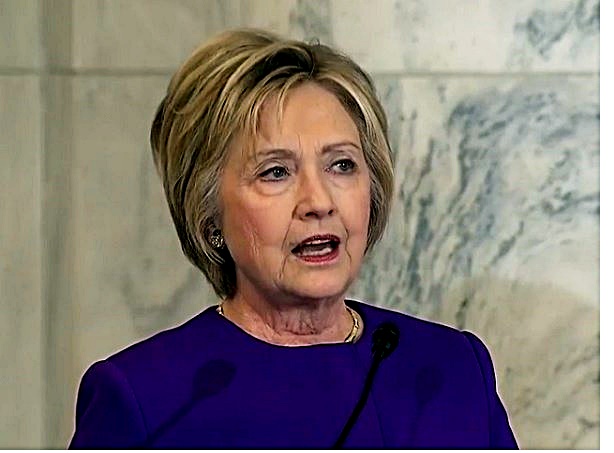 A pathetic looking Hillary Clinton came out of hiding after the “most devastating loss in the history of American politics” to chime in on the brouhaha surrounding alleged “fake news,” saying that “lives are at risk.”

I have no idea who would want to actually attend a meeting where this woman is speaking. However, she spoke on Capitol Hill and urged Congress to pass legislation that would “boost the government’s response to foreign propaganda.”

She also showed her support for censoring whatever the government wants to label “fake news” on social media, which has already been touted as “sophisticated Russian propaganda tools.”

Hillary Clinton on Fake News Dangers | Hillary Clinton says fake news can have “real world consequences”: “This isn’t about politics or partnership. Lives are at risk.”

“It’s a danger that must be addressed and addressed quickly,” Clinton said.

“Let me just mention briefly one threat in particular that should concern all Americans — Democrats, Republicans, and Independents alike — especially those who serve in our Congress: the epidemic of malicious fake news and false propaganda that flooded social media over the past year,” Clinton said.

“It’s now clear that so-called fake news can have real-world consequences,” she said. “This isn’t about politics or partisanship. Lives are at risk. Lives of ordinary people just trying to go about their days to do their jobs, contribute to their communities.”

“It’s a danger that must be addressed and addressed quickly. Bipartisan legislation is making its way through Congress to boost the government’s response to foreign propaganda, and Silicon Valley is starting to grapple with the challenge and threat of fake news,” Clinton added. “It’s imperative that leaders in both the private sector and the public sector step up to protect our democracy, and innocent lives.”

The irony of what Clinton is saying is utterly unbelievable! First, we are not a democracy. We’re a Republic.

Wasn’t it this witch that went out in front of the American people, conspired with Obama lackeys and sent out a spokesperson to blatantly lie to the American people about a fabricated story as the catalyst for the September 11, 2012 Benghazi attack that resulted in four real American lives being lost? Why, yes, yes it was.

Obama said he would stand with the Muslims should the political winds shift in a ugly direction and he was not kidding. The bodies of Americans coming home in coffins after a terrorist attack on the anniversary of 9/11 and his administration takes the opportunity to go after Coptic Christians and critics of Islam in a anti free speech political stance.

Susan Rice, Barack Hussein Obama Soetoro Sobarkah and Clinton all stood behind the lie about the video, even though Gregory Hicks, a Benghazi eyewitness, said the video was a “nonevent,” that the CIA knew from the start that Benghazi was a jihadist attack and had nothing to do with a video, and that more than likely Obama speech writer Ben Rhodes had something to do with changing the talking points that were provided to the administration. Even Clinton’s own State Department were involved in altering the talking points and emails prove this. State Department emails also confirm that Clinton and the White House knew within two hours that Benghazi was not a protest gone bad, but was a full blown jihad attack. Emails even show that the Tripoli embassy urged the criminals in DC to “not conflate” the video with the Benghazi attack.

Not only did she do that, but she then said she never lied about it, even though she spent $75,000 of tax payer dollars to apologize the people of Pakistan for the video. Let’s not even get into the lies concerning her illegal email server, which has resulted in at least one death.

Perhaps we should start censoring her every time she opens her mouth with real fake news, since she is obviously not telling the truth. Remember the time she lied about escaping sniper fire in Bosnia?

We could go on and on with the crimes of Mrs. Clinton, her husband Bill, her daughter Chelsea and the Clinton Foundation, all of which there is evidence to bear out that their crimes are real, but are being covered up by their conspirators in the state-controlled media. However, they also have accomplices in Congress, too.

Representative Devin Nunes (R-CA) and Representative Adam Schiff (D-CA) have put forth  H.R 6393: Intelligence Authorization Act for Fiscal Year 2017, which is in response to the real fake news mainstream media‘s claims that alternative media putting forth “fake news” are nothing more than agents of “Russian propaganda.”

It’s time the American people had enough of America’s own propaganda and demand their representatives and unelected people like Hillary Clinton stop attempting to infringe on the rights that are protected under the First Amendment concerning free speech, and freedom of the press.

Hillary Clinton: ‘It is Now Clear That So-called Fake News can Have Real-world Consequences’ [VIDEO]

Democratic Senator Harry Reid of Nevada is throwing in the towel. He’s retiring at the end of this year.

Hillary Clinton was invited to speak at an event honoring the outgoing Senator, in which she praised Reid. Placed awkwardly in her speech without any segue was a brief segment about “malicious fake news” which can have “real-world consequences” – no doubt referencing the actor who barged in to a D.C. pizza joint to “investigate” a child prostitution ring thought to involve the Clintons, the Podestas, and many others.

Apparently, according to one of Hillary Clinton’s aides, the former Democratic nominee did stop by Comet Ping Pong – the pizza place in question – to meet with the owner.

In her speech celebrating Senator Reid’s career and life, she mentioned the story about Ben Franklin being asked following the Constitutional Convention what kind of government they had formed, to which Franklin replied, “A Republic. If you can keep it.” Then, she said something about “standing up for our democracy,” and went straight into “fake news.” From RCP:

Let me mention briefly one threat in particular that should concern all Americans. Democrats, Republicans and Independents alike, especially those who serve in our Congress:  The epidemic of malicious fake news and false propaganda that flooded social media over the past year. It is now clear that so-called fake news can have real-world consequences.

This isn’t about politics or partisanship. Lives are at risk. Lives of ordinary people just trying to go about their days, to do their jobs, contribute to their communities. It’s a danger that must be addressed and addressed quickly.

Bipartisan legislation is making its way through Congress to boost the government’s response to foreign propaganda, and Silicon Valley is starting to grapple with the challenge and threat of fake news.

It’s imperative that leaders in both the private sector and the public sector step up to protect our democracy and innocent lives. Harry Reid and Vice President Biden may be stepping back from the daily scrum of politics and governing, but I know I speak for them as well as tens of millions of Americans when I say that we are all counting on those of you who remain.

Her comments start around halfway in:

The media were so quick to draw conclusions about the ‘fake news’ story “pizzagate” and the actor who fired a shot at the pizza place. If the same guy had gone in and yelled, “Allahu Akbar!” and killed a few people, the media would make sure no one jumped to any conclusions. “Just because he said ‘Allahu Akbar’ doesn’t mean that he must be a Muslim. It doesn’t mean it’s terrorism. Maybe it was just a disgruntled ex-employee, you Islamophobes!”

But since a guy waltzed in claiming to be investigating an underground child prostitution ring, the media and political establishment are falling over themselves, trying to shut down every conservative and libertarian site for spreading “malicious fake news” – created by a “sophisticated Russian propaganda campaign” conspiracy – that’s had “real-world consequences.”

The views expressed in this opinion article are solely those of their author and are not necessarily either shared or endorsed by EagleRising.com

Fake News Accusations is About Silencing My Voice & Your Voice

Tim Brown is an author and Editor at FreedomOutpost.com, SonsOfLibertyMedia.com, GunsInTheNews.com and TheWashingtonStandard.com. He is husband to his “more precious than rubies” wife, father of 10 “mighty arrows”, jack of all trades, Christian and lover of liberty. He resides in the U.S. occupied Great State of South Carolina. Tim is also an affiliate for the Joshua Mark 5 AR/AK hybrid semi-automatic rifle. Follow Tim on Twitter.

Hillary Clinton: ‘It is Now Clear That So-called Fake News can Have Real-world Consequences’ [VIDEO]

Phil has been writing about outrageous news and politics since 2012. He is the Editor at EagleRising.com and has written for Constitution.com, Last Resistance, Political Outcast, and Godfather Politics.