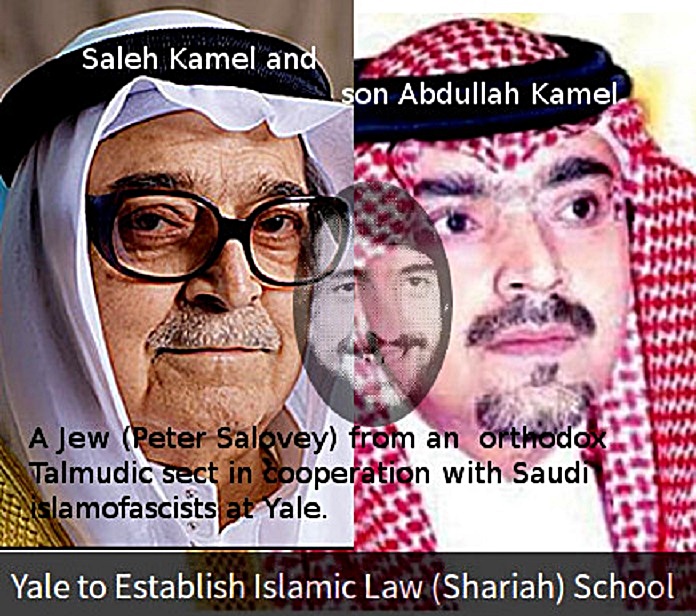 Paul Sutliff writes about Yale University diminishing into dhimmitude to what many call Radical Islam. (Islam is Islam if it follows its revered writings.) Paul briefly draws a verbal timeline of a favorable view of Osama bin Laden through to the present day acceptance of a TEN MILLION dollar donation from al Qaeda supporter Saleh Abdalla Kamel – a Saudi billionaire. And the clincher is Yale Law School honors the Muslim supporter of Islamic terrorism be creating the The Abdullah S. Kamel Center for the Study of Islamic Law and Civilization. 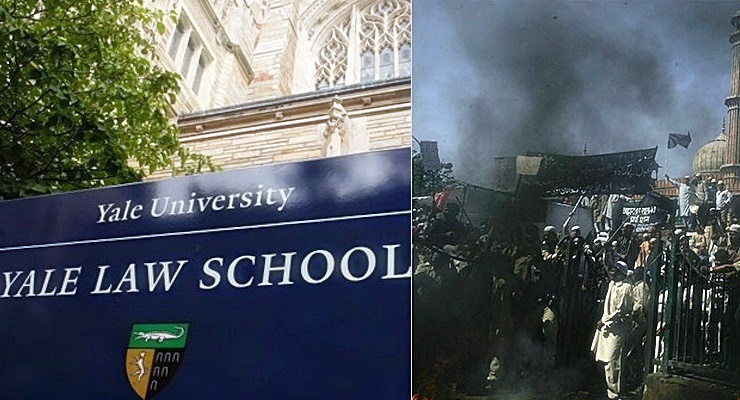 Study of Islamic Law and Civilization at Yale Law School, left, and Muslims in New Delhi in 2006 protesting publication in the West of cartoons of Muhammad, right. (Photos: PPD/ Saurabh Das/AP)

In 2008 Basak Otus, a writer for Yale Daily News, the leading news source for Yale University wrote an article that started:

English majors getting tired of Shakespeare and Wordsworth will soon be able to turn to Yale’s libraries for a poet of a different kind altogether: Osama bin Laden.

The backlash to this article should have been taken as a prophetic warning of what was to come, akin to the handwriting on the wall of King Belshazzar of Babylon in the Book of Daniel. In that story, the fingers of a man’s hand appeared and wrote on the wall an ominous warning that the Prophet Daniel interpreted as meaning:

1) God has numbered your kingdom, and finished it.

2) You have been weighed in the balances, and found wanting.

3) Your kingdom has been divided, and given away.

Basak Otis’ article in 2008 pointed out that Yale University no longer had America’s best interests at heart, but was in a love affair with one of the most notorious men of the modern era: Osama bin Laden. Perhaps the article would have faded into the background and remained forgotten if Yale woke up when it was attacked that June by a jihadist firebombing, which was intended to destroy their power plant.

But the wake-up call was ignored.

Yale University reverted to its love affair with Osama bin Laden in September 2009 and published a sharia compliant version of a book about Muhammad cartoons, by censoring the illustrations from being printed. This was less than three months after the attempted fire-bombing.

It was Yale University’s overt attempt to display “dhimmitude”–submission to Muslims–rather than show their heritage as great defenders of the First Amendment. Yale had the opportunity to take a strong stand for America and her beliefs in liberty for all of her citizens! It was a chance to be seen as the University that defends the First Amendment. Yale, however chose to become an example of “being weighed and found wanting” in their defense of the US Constitution.

In 2014 Yale Law School hosted Rachid Al-Ghannouchi to speak to its students and the community as well. Rachid is a member of the Ennahda Party in Tunisia. Ennahda is the Muslim Brotherhood entity in Tunisia. Osama bin Laden was and is still counted as a member of the Muslim Brotherhood. Yale University has people that vet public speakers. How is it possible they did not know that Al-Ghannouchi was a staunch defender of Hamas, a US declared terrorist entity?

Yale’s last act of dhimmitude was their receipt of $10 million dollars from the son of Saleh Abdallah Kamel, a documented financer of al-Qaeda with banking ties with Osama bin Laden, himself. Yale has agreed to place an Islamic Law Center in their Law School, but refuses to acknowledge that Islamic law is sharia. This act equates Sharia with the US Constitution.

The act of placing an Islamic Law Center at Yale forces the university to fight itself. Those studying at Yale to earn degrees in its seminary must take a stand, it is their Christian duty. The Music School also must fight this as Sharia requires the destruction of musical instruments and the very concept of a Music School.

The writing was on the wall in 2008. It seems 2015 is the year that Yale becomes divided against itself and will soon no longer exist as the great educational institution it once was.

Can Yale survive its Dhimmitude? I think not.

Paul Sutliff is an educator and research writer particularly focused on Islam, whose work has been recognized by Ryan Mauro of Clarion Project and FOX News. His latest book is Civilization Jihad and the Myth of Moderate Islam.