This year in 2018 Thanksgiving falls on November 22. If you are a Baby Boomer I am confident you are aware of the cursory history of whence Thanksgiving in relation to American history. Even though a large chunk of that history learned in school is largely legend more than actual history.

I have a suspicion the Thanksgiving story as it relates to our American heritage is largely ignored at least Public School today. Why? The centrality of the story of that Thanksgiving story was Religious Liberty and thankfulness to God Almighty. Today, Leftist propaganda and the impact of a Leftist activist Judiciary turned Freedom OF Religion into Freedom FROM Religion. Which first showed up when the Courts made it illegal to pray in school (irony – no more giving thanks to God for your school lunch in class unity). AGAIN, thanks to the activist Judiciary re-writing Constitutional interpretation accepted for nearly 200 years, prayer at Public School football games has been stripped before and/or after the game.

This Leftist forced reinterpretation of separating religious faith (in reality – separating Christianity) from anything that receives taxpayer support (mythical Church/State Separation revised interpretation) is contrary to everything representative of the credited first American Thanksgiving. This is the reason I have doubts the true nature of Thanksgiving is taught in Public School.

Now that you have consumed a little of my personal whine in reading thus far, I have a little historical cheese that you may find of interest – especially for anyone born after the Baby Boomer generation.

I found some history about the Christian Pilgrims (Separatist Puritans) of the Mayflower that landed on Plymouth Rock (in present day Massachusetts) that led to America’s beloved Thanksgiving. The article is by Bradley Birzer found at Intellectual Takeout. Even some Baby Boomers might find history that they had no awareness.

In this current state of media censorship & defunding, consider chipping in a few bucks for enjoying this Blog. 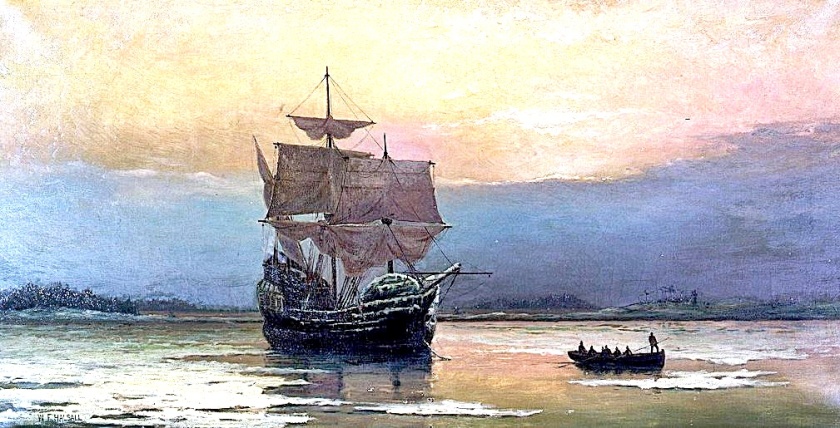 In 1620, an extraordinary thing happened.

At a small landing on the extreme western edge of the Atlantic Ocean, a boat named “Mayflower” rested just off shore of a rock, soon to be named Plymouth. Lost, but not mortally or dreadfully so, roughly 100 “sojourners” and 30 “strangers” arrived on November 11. With Autumn full blown and winter approaching quickly, the 130 had to figure out how to live with one another, how to survive a New England winter, and, most importantly, how to create a permanent community.

We all know the story. It’s been told repeatedly in every grade school in America for the last 155 years, and, in New England, since 1620 itself.  Every school child dresses up as either a pilgrim or an Indian, and we celebrate the harmony of it all. Those of us well beyond the age of school children remember the days of our dressing up as a moment of just and happy innocence, when America really was about peoples coming together, worshiping together, and loving one another without hesitation. We hunted and cooked the turkey, picked the sweet potatoes and cranberries, sat around a table together, and we broke bread with one another.

In November of the year of our Lord, 2018, we would do well to remember all of this not with mere nostalgia, but with moral intent. Gender confusions, LGBTQ questions, racial hatreds, social media rages, protesting dissensions, mass shootings, and authoritarian bullyings plague every aspect of our current American society. Some—on the so-called Left and so-called Right—even claim a second Civil War is coming. While this latter seems too extreme and horrific to contemplate, it is worth noting that we as a people have not been this violent or divided since 1968. Maybe it’s time to remember something that we all have in common.

Of the 130 members of the Mayflower, roughly 100 were “sojourners”—that is, those who considered themselves Puritan. Even among the Puritans, though, they were an odd sect. To be exact, they were “Separating Puritans.” That is, they believed that England and the English Church had become so corrupt (read: Catholic) that, at any moment, God might declare His mighty and just wrath by wiping the English isles off the face of the globe. As “Separating Puritans,” the Pilgrims could create a new society, one based on a proper understanding of the Gospels, as they interpreted them, as well as based on the early Church as described in St. Luke’s Acts of the Apostles.

Mainstream “Non-Separating Puritans”—who were numerically far superior to the “Separating” variety—considered the latter to be not just wrong but downright dangerous. With love as the highest virtue, the vast majority of English Puritans believed themselves a part of a larger Church, no matter how corrupt or Catholic that Church might be. To separate was to divide the body of Christ unnecessarily. Thus, they feared and despised their separating brethren. In what became Massachusetts, the non-separating variety would so out-populate and demographically surround the separating variety as to make the separating variety rather meaningless within a generation or two of initial settlement. All Puritans became one large New England family, more or less.

Whatever one thinks of the theology of the “sojourners,” their very attempt and survival in 1620 is nothing short of astounding. Imagine landing in a world completely unlike your own and with winter quickly approaching. There is no “escape.” To return to England would mean a cold death on the high seas. To move into the wilderness would mean settlement with even less knowledge of the land and much greater danger than life on the coast. Further, imagine landing hundreds of miles north of any known European settlement. There is no law, no authority, and no established way of life.

Yet, then consider what the Pilgrims really accomplished. Armed with scripture, the English Common Law, some weapons, families (for social stability), and an audacity rarely witnessed in the history of human kind, the Pilgrims made a go of it. To establish the import of the moment of community creation and to solidify their fragile community itself, the Pilgrims wrote a covenant, now incorrectly labeled the “Mayflower Compact.” While the re-naming of this document demands its own essay, suffice it to note here: New England historians and archivists employed the name “Mayflower Compact” for the first time ever in the early 1790s. Attempting to define American history from Plymouth Rock, not from Charleston or some other southern port of entry, the New Englanders of the 1790s renamed the document so as not to put off non-religious Americans. Compact, after all, was more acceptable for a secular, liberal, and Lockean people. Its original name—the Plymouth Combination—made its authors too much into exactly what they were—a radically religious sect of people. When the Pilgrims used “Combination,” they meant it quite literally. Combination was the English term for “covenant.”

IN THE NAME OF GOD, AMEN. We, whose names are underwritten, the Loyal Subjects of our dread Sovereign Lord King James, by the Grace of God, of Great Britain, France, and Ireland, King, Defender of the Faith, &c. Having undertaken for the Glory of God, and Advancement of the Christian Faith, and the Honour of our King and Country, a Voyage to plant the first Colony in the northern Parts of Virginia; Do by these Presents, solemnly and mutually, in the Presence of God and one another, covenant and combine ourselves together into a civil Body Politick, for our better Ordering and Preservation, and Furtherance of the Ends aforesaid: And by Virtue hereof do enact, constitute, and frame, such just and equal Laws, Ordinances, Acts, Constitutions, and Officers, from time to time, as shall be thought most meet and convenient for the general Good of the Colony; unto which we promise all due Submission and Obedience. IN WITNESS whereof we have hereunto subscribed our names at Cape-Cod the eleventh of November, in the Reign of our Sovereign Lord King James, of England, France, and Ireland, the eighteenth, and of Scotland the fifty-fourth, Anno Domini; 1620.

Once again, just imagine the audacity. With no king, no judges, no lawyers, no bureaucrats, and no bishops, a small group of people asserted the right to govern themselves as they saw fit. Though only half of the sojourners and half of the strangers made it through the winter of 1620-1621, it would be impossible to call the experiment a failure. After all, half did survive, rule themselves, and established the pattern for almost all settlement of what would become the United States.

This glorious November as the election cycle brings even more bitterness, more anger, and more division, it’s well worth remembering a time that we all share in common—the real founding of America by a group of ordered, well-armed, and determined Christian families. Though I’m a Kansan Roman Catholic born in the Summer of Love, I can state with certainty, as I remember the audacity of the “sojourners” and “strangers,” this is my America.

This article has been reprinted with the permission [to Intellectual Takeout] of the Imaginative Conservative.

Like you, we are deeply troubled by the growing divisions within America. Discussions today quickly become heated, emotional yelling matches that drive people further apart. Many of us even fear making our opinions known, lest we be ostracized, threatened, fired, or even physically assaulted.

How did the land of the free and home of the brave come to this? Frankly, we see a couple of significant contributors: Breakdown of the education system and the collapse of family and community.

Decades ago, parents could count on the local schools to train students in logic and ensure that they would be historically and culturally literate. No more. Meanwhile, the ongoing collapse of community, family, and faith leaves a large and growing number of Americans feeling lost, lonely, and adrift.

These changes, combined with smart phones and social media, have created a perfect environment for propagandists preying upon emotions to drive their agendas that threaten our very way of life.

While the times are indeed grave, there is hope. Every day the staff of Intellectual Takeout come to work eager to help restore and improve our great nation. We interact with millions of Americans each week, publishing numerous articles each day and then promoting them through vast social media and e-mail networks. Additionally, we host events, publish a monthly newsletter, provide commentary for traditional media shows, and give speeches to groups of all size.

Through it all, we have seen a great thirst for the work we do. As Eleanor W. wrote and told us:

“Reading the posts from you all every day is as refreshing as water to a desert traveler.”

It’s why we exist: To serve as a refuge for those who want to pursue truth, rediscover the wisdom and traditions of the past, discuss ideas calmly, and apply what’s been learned to their own lives and networks.

Now more than ever, Americans need a refuge for rational discourse, a place to peacefully pursue truth. To support Intellectual Takeout with a tax-deductible donation, please click here.