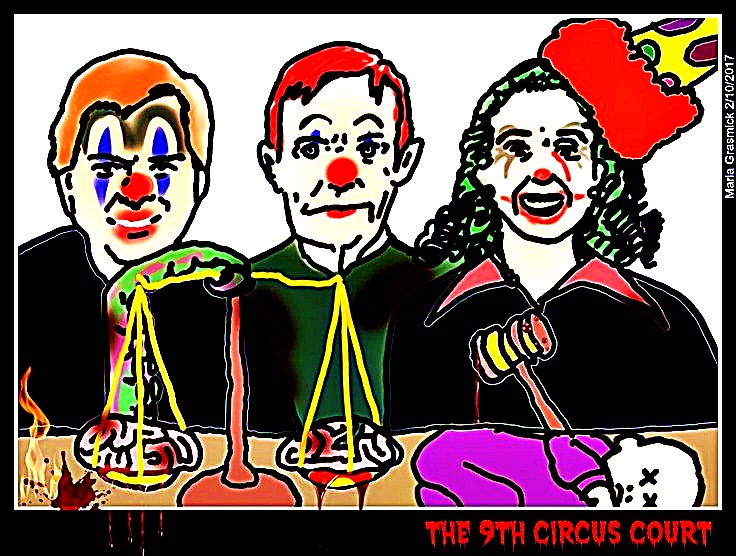 I just finished posting about the extremely questionable prosecution, jailing and exorbitant bail against Sandra Merritt this morning. Then, I go to my email inbox. Lo and behold! I found an email from Operation Rescue reporting the Ninth Circuit of Appeals (located on the Left coast) ruled that the Center for Medical Progress (CMP) undercover obtained videos and recording cannot be turned over to the police EVEN if criminal conduct is reveal!!!!!!

“A three-member panel of the liberally activist Ninth Circuit Court of Appeals ruled that additional footage obtained through the CMP’s undercover investigations – even those recordings that contain evidence of criminal conduct committed by Planned Parenthood and National Abortion Federation officials – cannot be released to law enforcement personnel. A requested review by the full Ninth Circuit was denied.”

What is our nation coming to when even the Judicial Branch condones lawlessness in the name of protecting the Leftist transformative agenda that has hammered into American thought?

Here is the Operation Rescue article that was linked in my email alert.

San Francisco, CA – The Center for Medical Progress and its founding members, including Troy Newman, President of Operation Rescue, are seeking to appeal a draconian Ninth Circuit Court of Appeals ruling to the U.S. Supreme Court in order to protect the First Amendment Rights of journalists to report to law enforcement evidence of crimes contained in undercover recordings.

A three-member panel of the liberally activist Ninth Circuit Court of Appeals ruled that additional footage obtained through the CMP’s undercover investigations – even those recordings that contain evidence of criminal conduct committed by Planned Parenthood and National Abortion Federation officials – cannot be released to law enforcement personnel. A requested review by the full Ninth Circuit was denied.

The ruling is related to a federal lawsuit, National Abortion Federation v. CMP, et al, that was filed in 2015 after the CMP released several videos showing Planned Parenthood executives haggling over top dollar to illegally sell aborted baby organs and tissue. The NAF sought to block the further release of possibly incriminating videos.

Attorneys for the American Center for Law and Justice are representing Newman in that case.

A joint motion filed May 5, 2017, is seeking a stay of the Ninth Circuit’s mandate pending the filing of a certiorari petition with the U.S. Supreme Court.

The motion states that the court wrongly upheld a “prior restraint” on CMP’s First Amendment speech, which had captured great public interest. The undercover videos were also the subject of investigations by House and Senate panels that later referred Planned Parenthood organizations to the U.S. Department of Justice and state Attorneys General for further criminal investigation and prosecution.

“Prior restraints are ‘the most serious and least tolerable infringement of First Amendment Rights,’” stated the motion to stay.

So radical was the Ninth Circuit’s ruling that the pro-life leaders’ defense attorneys argued:

Outside the context of trade secrets and classified information, no federal court – other than now this Court – has upheld an order suppressing information of high public interest based simply on the agreement of the parties to do so. Other federal courts have declined to put the weight of their contempt power behind the enforcement of private agreements to defeat the public’s right to know.

“In a case of critical importance to free speech rights, the Ninth Circuit has wrongly barred pro-life citizen journalists from reporting crimes and submitting evidence to law enforcement. Instead, the Court has opted to protect the ability of the NAF and Planned Parenthood to conceal possible criminal activity,” said Cheryl Sullenger, Senior Vice President, Operation Rescue. “The rogue Ninth Circuit has showed their penchant for liberal, pro-abortion judicial activism once again, and we look forward to the U.S. Supreme Court once again overturning one of their grossly unconstitutional decisions.”

Operation Rescue® is one of the leading pro-life Christian activist organizations in the nation. Operation Rescue® recently made headlines when it bought and closed an abortion clinic in Wichita, Kansas and has become perhaps the most visible voice of the pro-life activist movement in America. Its activities are on the cutting edge of the abortion issue, taking direct action to restore legal personhood to the pre-born and stop abortion in obedience to biblical mandates.

Adopted at birth and raised in San Diego, Troy Newman has more than 27 years of experience and leadership in business and pro-life ministry with great success growing Christian organizations. Troy is an accomplished strategist with remarkable insight.

His vision, expertise, and leadership have … READ THE REST