If you haven’t already heard, Loretta Lynch has been caught using an alias in communicating about her meeting with former President Slick-Willie Clinton on an airport tarmac right smack in the middle of the 2016 Presidential campaign and the investigation – er I mean the “matter” – of Crooked Hillary’s easily hacked private email server.

Once Lynch has been outed in suspicious emails with a clandestine email handle connected to the tarmac meeting, the Conservatives (including me) pointed the “I knew it finger”. Unsurprisingly the Leftist pundits claim, “nothing to see here”. As if because many Obama Administration used email aliases explains everything. BULL MANURE! The email aliases point to hiding a nefarious Obama communication system to hide unseemly activities.

If someone didn’t do anything wrong, then is there any reason to use an alias when referring to what you did? That’s the question that Congress needs to be asking former Obama Attorney General Loretta Lynch.

On June 27, 2016, in the heat of the presidential campaigns and during the FBI investigation of Hillary Clinton’s email scandal, Lynch met with and talked with Bill Clinton on the tarmac as Phoenix Sky Harbor International Airport. This was quite unusual and drew many questions, but Lynch and Clinton swore that it was just a friendly meeting with no discussion about the campaign of email scandal. RIGHT! (WHY DID LYNCH USE ALIAS IN REFERRING TO CLINTON TARMAC MEETING? By D JOLLY; Great American Politics; 8/8/17)

This means Lynch committed perjury at her Congress testimony:

It looks like Loretta Lynch lied but will it matter?

As the video shows, Lynch lied about using government email for only official business. Lynch lied! Will she be prosecuted? I’m thinking this is a great drain the swamp opportunity to give her immunity in exchange for at least the true conversation between her and Slick Willie. If Lynch continues with the crapola that the conversation was about family matter, prosecute her for lying. No one happens to be at an airport tarmac to speak with an ex-President merely on family matters!

Boom! Loretta Lynch Used Alias Email for Alibi the Day After She Was Caught Meeting with Bill Clinton on Tarmac

The Department of Justice released hundreds of emails to the American Center for Law and Justice (ACLJ) this week in the investigation of former AG Lynch’s secret meeting with former President Bill Clinton.

One email shows Loretta Lynch hiding her identity from Department of Justice officials. 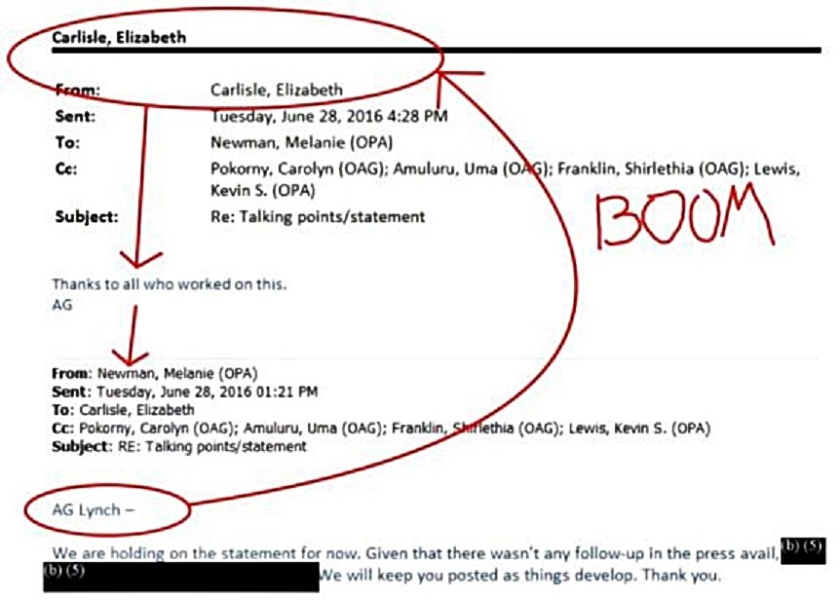 Melanie Newman from the Department of Justice leaked it in the email.

And— AG Lynch (Elizabeth Carlisle) then responded with a “thanks to all who worked on this.”

BREAKING: Did Loretta Lynch use an alias to communicate with DOJ officials and why? Who is Elizabeth Carlisle? Dear Internet, investigate! pic.twitter.com/oqngTKDhLY

MORE— Another message from June 29 to the Attorney General was sent to the Elizabeth Carlisle account.

Here is her grandmother’s death certificate.

It looks like the deep state forgot to cover that up in the emails they released to the ACLJ.

AG Loretta Lynch told Rep. Trey Gowdy (R-SC) under oath that she only uses official email in November 2016 — after these above emails were sent.

Rep. Trey Gowdy: So you use official email to conduct official business?

That was a complete lie under oath.

Channel Merchandise Has READ THE REST

Lynch’s attorney confirmed on Monday that Lynch emailed under that pseudonym.

“Lynch’s attorney, Robert Raben, confirmed to TheDC on Monday that Lynch emailed under that pseudonym. He pointed to an article published in The Hill last February in which the Justice Department acknowledged that Lynch was using an email handle that was not her given name.

“That address was and is known to the individuals who process [Freedom of Information Act] requests; the practice, similar to using initials or numbers in an email, helps guard against security risks and prevent inundation of mailboxes,” Raben said.

And Lynch used the alias email the day after she was caught meeting with Bill Clinton on on a private plane in Arizona.

Lynch said she and Clinton talked only of grandchildren, golf, and their respective travels but the documents that were released to Judicial Watch are highly redacted confirming none of that was true.

Lynch used her Carlisle address on June 28th — the day after her infamous meeting with Bill Clinton.

Loretta Lynch lied about not using an alias email while under oath, she lied about the nature of her conversation with Bill Clinton on the Arizona tarmac and now she was caught using her alias email the day after her infamous tarmac meeting to decide on how she would lie to the lapdog media.

Boom! Loretta Lynch Used Alias Email for Alibi the Day After She Was Caught Meeting with Bill Clinton on Tarmac

About The Gateway Pundit

In late 2004 I started The Gateway Pundit blog after the presidential election. At that time I had my twin brother Joe and my buddy Chris as regular readers. A lot has changed since then.

Today The Gateway Pundit is one of the top political websites. The Gateway Pundit has 15 million visits each month (Stat Counter – Google Analytics). It is consistently ranked as one of the top political blogs in the nation. TGP has been cited by Sean Hannity, Rush Limbaugh, The Drudge Report, The Blaze, Mark Levin, FOX Nation and by several international news organizations.

Jim Hoft was awarded the Reed Irvine Accuracy in Media Award in 2013. Jim Hoft received the … READ THE REST