I am a bit disturbed and perturbed that Left-Wing Jews are shooting themselves in the foot by working against shoring up the Jewish identity of Israel by propagandizing Israel’s public with typical lies about the new Nationality Law.

JewishPress.com has the story of how Israel’s Left is destroying their own nation.

In the week before the Saturday night rally in Tel Aviv’s Rabin Square against Israel’s new Nationality Law, the organizers issued frequent announcements to the media, signed by the “headquarters of the struggle against the Nationality Law.”

According to the website Mida, the group behind the “struggle” is Anu (Us in Hebrew), a leftist NGO supported by the New Israel Fund, the European Union, UNESCO, and the Shoken fund, to name a few.

Anu is also behind an online funding campaign to raise money for the rally and the continued fight against the new law.

To remind you, the Basic Law: Israel as the Nation-State of the Jewish People, enacted July 19 by a majority of 62 to 55 with 2 abstaining, establishes the constitutionality of the three historic Zionist principles: the free return of the Jews to the land of our fathers; the free settlement of Jews everywhere in Israel; and the miraculously revived Hebrew as the official language of the Jewish State. Calling these principles racist and part of an apartheid policy is tantamount to attacking the very existence of a Jewish State.

But the Anu-supported “Struggle Headquarters” describes the new Basic Law (meaning it is constitutional) in a distorted way, with clear post-Zionist attitudes woven between the lines.

For one thing, the Struggle Headquarters does not distinguish between Israeli minorities who committed to military service and those who do not, presenting the protest as being shared by “Druze, Jews and Arabs.” This despite the yawning gap between the position of a large number of Israeli Arabs, who identify themselves as “Palestinians” and pray for the destruction of Israel, and the overwhelming majority of the Druze, who are proud of their country and fight for it in the battlefield.

The Struggle Headquarters propaganda maliciously misrepresents the law, using a false comparison between two Border Guard officers, one a Jew, the other a Druze, and stating that “the Nationality Law states explicitly: They are not brothers! They are not equal!”

The Struggle Headquarters intentionally lies to the public, suggesting the new law “officially cancels the principle of civil equality” and “justifies inequality in the distribution of national resources,” both utterly baseless claims.

They also claim the law “cancels the recognition of Arabic as an official language,” when the Nationality Law, which crowns Hebrew as the Jewish State’s official language, also explicitly uphold the special status given to the Arabic language.

Along with the above distortions, the Struggle Headquarters is also infected with post-Zionism: “The government, deliberately, violates the international right of minorities to national self-determination as minority groups,” the campaign declares, but fails to explain what is the basis for this so-called “international right.” That’s because no such right exists.

Minority rights, as applying to ethnic, religious or linguistic minorities and indigenous peoples, are an integral part of international human rights law, designed to ensure that a specific group which is in a vulnerable, disadvantaged or marginalized position in society, is able to achieve equality and is protected from persecution. The concerns of international legal conventions on minority rights are not to prevent nation-states such as England, Denmark, France or Israel from remaining so, but to prevent the genocide of minorities in places like the former Yugoslavia or east Africa. In countries with a Western democratic tradition, minority rights are usually protected by affirmative action quotas.

And yet, the literature disseminated by the Struggle Headquarters say Israel must provide “national self-determination” to Israeli Arabs, many of whom identify themselves as “Palestinians.” This is a concept that promotes eliminating the uniqueness of the Jewish national identity of the State of Israel.

This post-Zionist outlook joins similar statements made by Druze former General Amal Assad, one of the leaders of the struggle against the Nationality Law, who believes the Jews do not have a unique right to the Land of Israel, as he put it recently on his Facebook page: “Where did you get the nerve to determine that the country belongs to the Jews? What is the foundation of the claim of the Jewish right and ownership of the land?”

Last week, it was the same Assad who caused the collapse of a meeting between Prime Minister Netanyahu and the heads of the Druze community, when he declared that Israel is on its way to becoming an “apartheid state.”

One of the prominent figures in the “struggle against national law” is Dr. Ricki Tessler, a faculty member at the Hebrew University’s School of Education and chair of the Academic Forum on Civics Education. Tessler is the spearhead in the campaign to eliminate national-Zionist values from the teaching of civil studies, in favor of “universal” values ​​that correspond to the values ​​of a state of all its citizens.

In an interview with the Knesset TV channel, Tesler expressed her rage at the fact that the country’s civil studies books teach that “the government can make decisions because it is the majority,” protesting: “Where will all this lead us?”

In other words, Tessler is enraged by the most basic principle of democracy: majority rule.

ANU AND THE NIF

Anu is a federation of lefwing [sic] organizations, including Agenda, heavily sponsored by the New Israel Fund (80% of its budget came from NIF).

Agenda’s board included NIF’s Executive Director in Israel, Rachel Liel; MK Daniel Ben-Simon (Zionist Union); and former Israel TV news director and current mayor of the Druze town of Daliat al-Carmel, Rafik Halabi, who is one of the pillars of the protest against the Nationality Law; and the group’s director-general Anat Saragusti, who later ran B’Tselem US.

Between 2014 and 2017, Anu received more than $550,000 in grants from the NIF. The NGO also receives grants from the European Union and the UN, the specific amounts are not yet known. 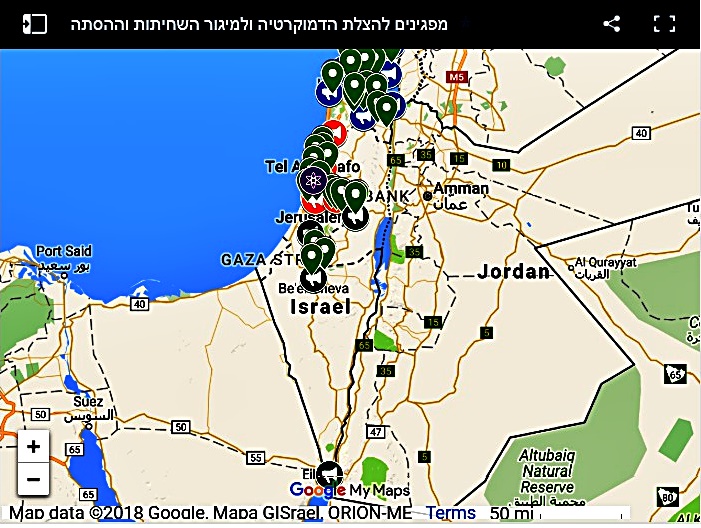 Anu serves the leftist agenda, dedicating its official website and Facebook page to promoting leftwing demonstrations under the title “The People Are Fighting Corruption.” Anu provides organizational knowledge to expand the circle of participants in the demonstrations, offering an online demonstrations map, directing users to the locations of the demonstrations throughout the country, and providing updates via email on upcoming rallies.

To date, Anu has launched an extensive campaign to prevent the expulsion of illegal African infiltrators, spreading blatant lies such as that “the State of Israel expels tens of thousands into mortal danger”; demonstrations against the government’s natural gas outline; rallies against the demolition of illegal construction in Bedouin settlements in the Negev; and support for the Barbur Art Gallery in Jerusalem, which hosted members of extreme leftist, anti-Israel organizations in a venue that is public property belonging to the Jerusalem Municipality.

Among the more bizarre campaigns appearing on the organization’s website is “The struggle against brain-control crimes.” Anu claims that “university management retirees, together with subcontractors from intelligence organizations, fire electromagnetic radiation to establish remote brain control, to manage the citizens using microwave radiation.”

JNi.Media provides editors and publishers with high quality Jewish-focused content for their publications.

JewishPress.com – Bringing you the news from Israel and the Jewish World

The Jewish Press is the largest independent weekly Jewish newspaper in the United States. The paper, founded by Rabbi Sholom Klass (1916-2000) and Mr. Raphael Schreiber (1885-1980), debuted as a national weekly in January 1960 and quickly won a following for its eclectic mix of Jewish news, political and religious commentary, the largest Jewish classifieds and special features — including puzzles, games and illustrated stories —  for young readers.

For over five decades now The Jewish Press has championed Torah values and ideals from a centrist or Modern Orthodox perspective. The paper has been a tireless advocate on behalf of the State of Israel, Soviet Jewry, and agunot (women whose husbands refuse to grant them a religious divorce), and has taken the lead in urging a greater communal openness in addressing domestic violence and other social ills.

In 2011, the JewishPress.com website and related Internet properties were relaunched as an independent, daily online newspaper, with breaking news and in-depth articles on Israel, the Jewish People and the world. The Internet edition is managed by Stephen Leavitt.