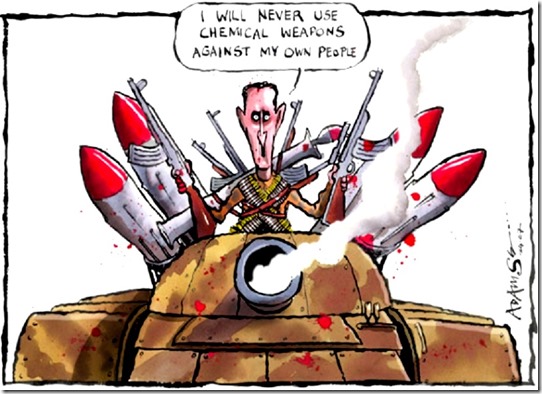 Most Conservatives see the Syrian Civil War as a no-win situation for American National Interests. On one side you have the rogue government of Bashar al-Assad that is Iran’s ally and a conduit for Islamic terrorists especially the Shi’ites of Hezbollah entrenched in Lebanon. On the other side you have the Free Syrian Army (FSA) that is a loosely united bunch of Sunni Muslims and Syrian Secularists (See Also HERE and HERE) rebelling against Assad’s Shi’ite Alawite dominated government. The current problem with the Free Syrian Army rebels is that its army is dominated by Islamist factions of which the largest appears to an al Qaeda affiliate.

History shows that helping Islamists against a current common enemy of the USA will come back to bite us in the – you know what. We aided Taliban Islamists against the Soviet invasion of Afghanistan. Taliban were more than willing to take American aid to be a thorn in Soviet Russia’s side until the Soviet army withdrew and the puppet Communist government eventually fell into the hands of Mullah Mohammed Omar. AND the old one-eyed Mullah Omar repaid our aid by giving al Qaeda and its power structure led by Usama bin Laden refuge after the psycho Islamic terrorist sneak attack on 9/11.

The same thing will probably happen if America decides to aid the FSA against Assad’s rogue Syrian government. So then why help the FSA?

The reason for helping the FSA is because ending Assad throws a monkey wrench into Iran and Hezbollah’s nefarious designs against Israel and the USA. Well, at least for awhile there will be disruption against Iran.

The hat trick is knowing history of radical Muslims we have helped will bite our gluteus maximus then at least be smart enough to develop a couple of back-up plans in preparation for that radical Muslim back-stabbing. And by back-up plans I mean something that will strike pain and fear for radical Muslim treachery. A military response does not necessarily mean soldiers on the ground. A military response can be a military strike using conventional weaponry or nuclear weaponry on a strategic basis. And strategic nukes does not turning a whole nation into nuclear made glass from a massive nuke blast.

So yes, at this time an American led coalition needs to remove and punish Assad and his chem-weapon happy generals as war criminals.