Kyle Rittenhouse defending self after assault

InfoWars and Alex Jones (Profiles: [Complimentary via] InfoWars, [Typically uncomplimentary via] Wikipedia & ADL)  has been the Conservative version of the National Enquirer for decades. Meaning the stories may garner interest, scintillating distortions or just plain fiction which though unreliable might be fun to read unless you are the butt-end of the subject matter. Ergo typically, I avoid sourcing fro that location.

In today’s political climate, the Leftist Mainstream Media is of little reliable integrity on pare with the old InfoWars reputation. With Leftist MSM bias and unreliability toward Conservatives, I decided to cross post an InfoWars story on how Facebook is trying to block funding being raised I presume for the legal fees Kyle Rittenhouse needs to defend himself from baseless Wisconsin prosecution who killed some Communists trying to kill him. If I was Rittenhouse I’d use some of that funding to bring a civil suit against ANY media outlets accusing him of racist White Supremacism – A LIE FROM DEMS AND MEDIA PROPAGANDA MACHINE.

Since Big Tech likes to censor truth and especially InfoWars, I’m cross posting the NWO Report pick-up of the story. I suspect the iron boot of Marxist lying censorship will still show its ugly heal to unjustly condemn Kyle Rittenhouse.

Kyle Rittenhouse is charged as an adult with two counts of first degree homicide; insight from attorney John Pierce.

I don’t care what the lying Left claims in character assassinations, Rittenhouse is a young hero who has set an example of action when Dem-Marxist managed police do nothing to protect property, prevent looting and do not life and limb from BLM/Antifa Communist thugs utilizing the very same Nazi/Fascist tactics they claim to condemn. 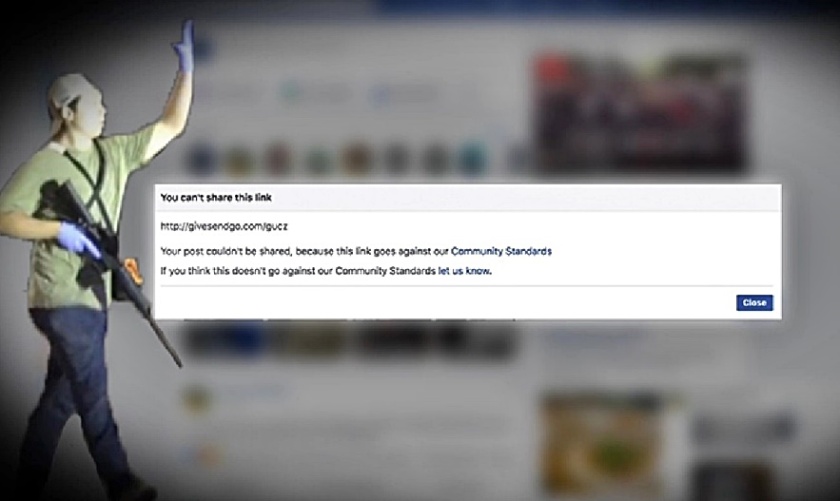 As of Tuesday, the campaign, which is said to be in contact with the Rittenhouse family and Kyle’s legal team, has raised nearly $300,000.

On Thursday, the popular crowdfunding site GoFundMe removed a campaign for Rittenhouse within minutes of it being posted.

Meanwhile, as National File reports, “The GoFundMe page for Black Lives Matter rioters arrested by police in Portland has been allowed to accumulate over $1.3 million in donations.”

See a screenshot below or try to share the link yourself:

In fact, Facebook users are banned from searching the name Kyle Rittenhouse whatsoever.

The following image is a screenshot of a Facebook search for “Kyle Rittenhouse.”

The Big Tech social media network is also censoring posts citing new CDC data showing only 6% of America’s COVID-19 deaths were attributed to the virus alone and that 94% of those who died had 2-3 comorbidities.

Twitter is joining Facebook in censoring users from sharing the public admission by the CDC, and even deleted a retweet by President Trump on Sunday after he shared a post highlighting the revelation.

Facebook’s anti-free speech agenda isn’t limited to the United States as users in Australia could soon be banned from posting any local or international news on the site.

John Pierce, the attorney for Kyle Rittenhouse, appeared on Monday night’s broadcast of Tucker Carlson Tonight to share previously unknown details of the shooting and to make a case for his client’s innocence.

This website will shake the very foundation of everything you believe about the world and we prove every statement we make.  It may sound crazy but we prove every claim we make.

Once dismissed by cynics as a “conspiracy theory the New World Order is rapidly becoming a reality. We look at its origins, how it operates and how it affects the lives of everyone.

This website serves one purpose – to prove with undeniable proof that there is a group of extremely rich “power mongers” who want to rule the world in a slave state that makes the most extreme horror movie seem pale by comparison.  They call their plan the New World Order.  We want to “Wake Up” as many good people as possible to try to put an end to this insanity.  As crazy as this sounds everything on this website is confirmed by multiple mainstream press news reports, reputable encyclopedic references or websites of those making the claims.