GOP nominee for President rated President Barack Hussein Obama’s foreign policy as an across the board “F”.

Asked to grade Obama, Romney responded: “Oh, an F, no question about that,” adding that it applies “across the board.”

Tim Roemer, a former Democratic congressman from Indiana and ex-ambassador to India, said Romney is “misguided and misinformed.” Romney is out of step with experts in his own party who “have recognized President Obama’s accomplishments” in foreign policy, Roemer said in an e-mailed statement. (Presidential Campaigns Duel Over Candidates’ Jobs Records, by John McCormick and Alison Vekshin; Bloomberg; May 31, 2012 11:03 PM CT)

If you look at reality rather than Obama propaganda you know Romney is correct. There is nothing misguided or misinformed or out of step with fellow Republicans in the “F” grade for Obama.

No one says it better than Caroline Glick who as actually criticizing Israel Defense Minister Ehud Barak for insinuating that Israel unilaterally should give up Judea-Samaria to bring peace to Israel.

Glick points out that land for peace didn’t work for Barak when he was Prime Minister in 2000 after bending to pressure to leave South Lebanon in 2000. Hezbollah not only turned South Lebanon into a mini-fiefdom but eventually became the de facto rulers of Lebanon under the strings of Iran and Syria.

Glick points out that Prime Minister Sharon’s decision to unilaterally pull out of Gaza in 2005 forcing Israeli settlements to pull up roots was also an utter failure in the land for peace thinking. Hamas rooted out the PA and turned Gaza into a mini-Fiefdom constantly shooting rockets into Israel’s civilian urban areas.

Now Glick is focusing Defense Minister Ehud Barak’s idiotic comment; however as you read her article you will note the extreme failure of President Barack Hussein Obama’s in the Middle East relating to Israel, Iran, Syria and pushing the existence of a sovereign Palestine on the land of Israel’s heritage.

If Israel’s policy were to go along with Ehud Barak’s suggestion it would not bring peace to Israel. Rather it would bring a murdering bunch of Arab terrorists who have adopted the name Palestinian on Israel’s border. The murdering thugs would not subscribe to peace! Rather the thugs would be dedicated to destroying Israel and the mass genocide of Jews.

Although politically distasteful, it actually would make more sense to remove all Arabs that refuse an allegiance to Israel and permanently annex Judea-Samaria (West Bank) and Gaza. I have no doubt a war would result from such an action; however I also know at this point Israel would still win a regional war. The Jewish State of Israel could even easier shut down borders from terrorists with such an official expanded territory because sovereign nations such as Jordan, Syria, Lebanon and Egypt again could be held responsible for allow Islamic terrorist attack on Israeli soil. After all the whole reason the old Arab League created the Palestine Liberation Organization was a tactic to keep violence against Israel in perpetuity while the surrounding Arab or Muslim nations could not be held directly culpable for attacking Israel.

The failure of Obama and past American Presidents – Democrats and Republicans – is a failure to look at the big picture for the future. Now as Obama allows Iran to go nuclear in creating Weapons of Mass Destruction the scenario for a military enforced peace via annexation becomes less and less workable.

There is no doubt in my mind that a sovereign Palestine State will be yet another puppet for Iran to manage. We all know Iran’s feelings toward the Jewish State of Israel. 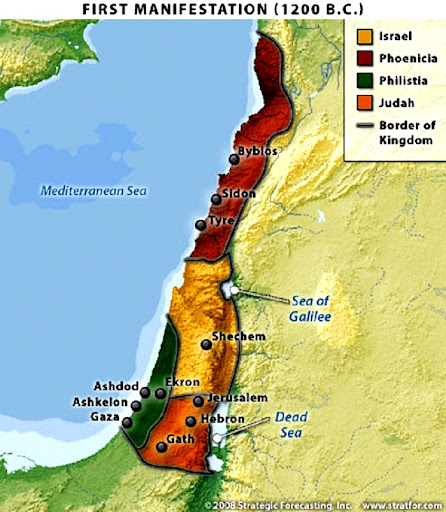 STRATFOR has developed an interesting geopolitical profile that focuses on Israel. The profile focus is interesting because it does not begin with the birth of modern Israel in 1948. STRATFOR looks at Israel’s geopolitical position that stretches back 3,000 years from the days the Twelve Hebrew Tribes under the guidance of Yahweh-God being the one true God that made the Hebrew people the nation of Israel in the Promised Land.

One thing you should note in reading the STRATFOR profile there is no mention of a homeland of people that could be known as Palestinians in a geographical and political sense. Well not in the sense that an Arabic tribe existed that could call itself Palestinian.

The STRATFOR profile below was emailed in its entirety that included a link to the view the email as a webpage. I am uncertain how long that link will exist but I will use it as a reference for as long as it will last.

Lebanon’s President has ousted Prime Minister Saada Hariri who happens to a son of the assassinated Prime Minister Rafik Hariri which started the Cedar Revolution that ousted Syria from controlling Lebanon. The move is seen as a Hezbollah conspiracy to slow down the UN investigation that has secretly (at least to date) indicted persons of interest in the Rafik Hariri assassination. Further Hezbollah culpability is in the fact that Najib Mikati has been designated as Prime Minister who has been supported by Hezbollah.

There is speculation that there is a big dog Muslim named in the indictment. That would be fearless leader Ayatollah Khamenei of Iran. Frankly I amazed that something under UN auspices would take aim at a power dog like Khamenei so we will see what happens with that.

I cross posted with an article from Sister Toldjah in which Michael Totten is quoted as guessing that a Hezbollah controlled government opens Lebanon to be held responsible as a nation for the terrorist acts of Hezbollah. Accountable responsibility could lead Israel to invade all of Lebanon rather than the Hezbollah missile controlled areas of southern Lebanon. This time might a part of an Iranian agenda to incite war in the region to acquire a stranglehold on the global oil market.

Tomorrow is Thanksgiving Day which means family, food and football. I received an email from ACT for America pertaining to Thanksgiving. Brigitte Gabriel writes about a video she put together in 1987 that was shown at her wedding in 1987 in America. I’ll Brigitte explain about her video.

Sent by: ACT for America

“Thirty-five years ago this month, my home was bombed”

As we celebrate Thanksgiving in this land of abundance, we reflect back on all the blessings we have in our lives. For me every Thanksgiving has special significance because it was at the end of November, 1975 that my life was changed forever.

Recently, I showed some friends a video that my husband, a journalist I met in Israel, made about my life to introduce me during our wedding ceremony in America in 1987. My friends said: “Brigitte you should show this, so people can see what you talk about in your book.”

This video was done 23 years ago, before I came to America, well before realizing my mission in life and well before starting ACT! for America. In this video, you will see my home, my parents, and scenes of my life during the war, shot with my mother and my cousin depicting my experience in the very bomb shelter I lived in.

When people ask me why I am so passionate about fighting the threat of radical Islam, and why I am so thankful for America, this is why.