Gary M. Galles provides a book review of Liberty in Peril: Democracy and Power in American History by Randall Holcombe. The Holcombe book and review author Galles provide a civics lesson certain to drive Dem Party members and their MSM propaganda machine nuts as it explains the Founders disdain for a government by democracy as opposed by a Republic by consensus.

In his book “Liberty in Peril,” Randall Holcombe challenges the presumption that liberty and democracy are complementary. 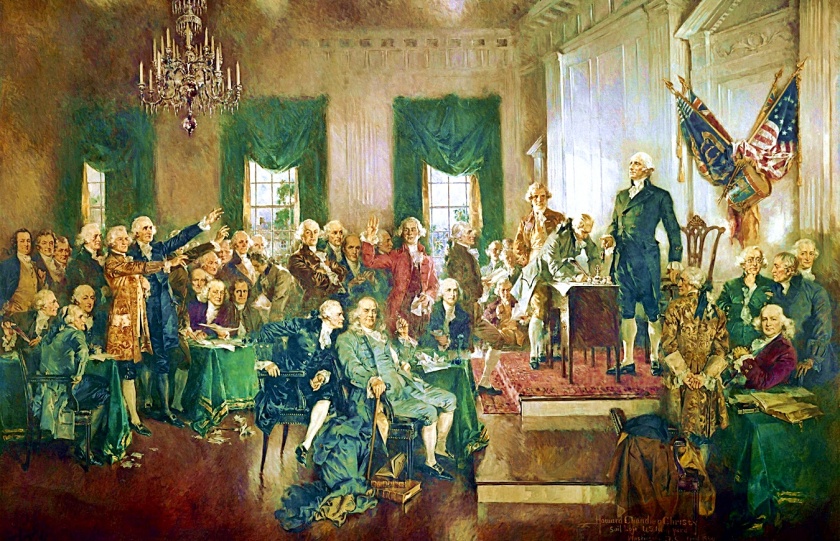 When I took history and government in school, many critical issues were misrepresented, given short shrift, or even ignored entirely. And those lacunae undermined my ability to adequately understand many things. Randall Holcombe’s new book, Liberty in Peril: Democracy and Power in American History, fills in some very substantial gaps, particularly with regard to American constitutionalism and how it has morphed from protecting liberty to advancing democracy at the expense of liberty. It does so with a host of novel and important insights rather than the disinterest generated by the books I suffered through in school.

The Role of Government

Holcombe gets right to the main point:

The role of government as [America’s founders] saw it, was to protect the rights of individuals, and the biggest threat to individual liberty was the government itself. So they designed a government with constitutionally limited powers, constrained to carry out only those activities specifically allowed by the Constitution. This book describes how the fundamental principle underlying American government has been transformed from protecting individual liberty to carrying out the will of the people, as revealed by a democratic decision-making process. (p. xxii)

Holcombe begins by laying out the case that “the Founders had no intention of creating a democracy, in the sense of a government that would be guided by popular opinion,” (p. 5) in sharp contrast to current “understanding.” And what makes the transformation from a central focus on liberty to a central focus on democracy that routinely invades liberty particularly significant is that

the powers embodied in America’s twenty-first-century democratic government are those that eighteenth-century Americans revolted against to escape. (p. 7)

Since I do not have the space to dissect all of the issues in Liberty in Peril, I would like to highlight a few particularly noteworthy things.

Holcombe starts with John Locke, which is a common place to start for those interested in advancing liberty. But he also calls attention to Cato’s Letters, which was one of the most influential—but now almost completely ignored—influences leading to the birth of the American Revolution. I have long been struck by how many of the insights our founders are credited with that actually trace back there (see the first major chapter of my book Lines of Liberty), and I echo Holcombe’s invitation for more people to discover it.

Are Liberty and Democracy Complementary?

Liberty in Peril challenges the typical current presumption that liberty and democracy are complementary.

The principle of liberty suggests that first and foremost, the government’s role is to protect the rights of individuals. The principle of democracy suggests that collective decisions are made according to the will of the majority…The greater the allowable scope of democracy in government, the greater the threat to liberty…In particular, the ascendency of the concept of democracy threatens the survival of the free market economy, which is an extension of the Founders’ views on liberty. (pp. 14-15)

This is reflected in the changing nature of elections.

At one time, elections might have been viewed as a method of selecting competent people to undertake a job with constitutionally-specified limits. With the extension of democracy, elections became referendums on public policy. (p. 20)

The book also challenges commonly held presumptions that our Founders wanted democracy. But while “the Founders wanted those in charge of government’s operations to be selected by a democratic process,” they “also wanted to insulate those who ran the government from direct influence by its citizens” because “[b]y insulating political decision-makers from directs accountability to citizens, the government would be in a better position to adhere to its constitutionally-mandated limits.” (p. 15)

“Thus, the Constitution created a limited government designed to protect liberty, not to foster democracy.” (p. 16) But the United States “consistently has moved toward more democracy, and the unintended side effect has been a reduction in liberty.” (p. 25)

Holcombe lays out issues of consensus versus democracy, with consensus illustrated by market systems in which all those whose property rights are involved agree to transactions, (p. 29) but in government, “a group is able to undertake more extensive collective action if it requires less consensus to act.” (p. 30) And the slippery slope is that

[t]he more citizens want to further national goals through government action, the less consensus they will demand in the collective decision-making process. (p. 33)

An In-Depth Study of the Constitution

Another notable aspect of Liberty in Peril is how far beyond the typical discussion of constitutional issues it goes, substantially expanding readers’ understanding in intriguing ways. For instance, how many Americans know of the Iroquois Constitution, which focused on unanimity? How many are aware of the Albany Plan of Union, drawn up in 1754, or how it was influenced by the Iroquois Constitution? How many know that a “clear chain of constitutional evolution proceeds from the Albany Plan of Union to the Articles of Confederation to the Constitution of the United States”? (p. 43)

How many have noticed that “when compared with the Articles of Confederation, the Constitution clearly less constraining than the document it supplanted…the Constitution did not limit the powers of government; it expanded them”? (p. 48) Yet,

[w]hile the authors of the Constitution did deliberately expand the powers of the federal government, they just as deliberately tried to prevent the creation of a democratic government. (p. 52)

Holcombe’s section on “The Elitist Constitution” is fascinating. It lays out the case for why “[t]he Constitution devised democratic processes for collective decision-making, but the Founders had no intention of designing a government that would respond to the will of the majority,” (p. 70) as illustrated by the fact that citizens “had almost no direct input into the federal government as the Constitution was originally written and ratified.” (p. 70)

The section on the Electoral College is even more striking, as it stands in sharp variance from the presumptions behind almost the entire current debate over the National Popular Vote compact:

[A]t the time the Constitution was written the Founders anticipated that in most cases no candidate would receive votes from a majority of the electors. The Founders reasoned that most electors would vote for one candidate from their own states…and it would be unlikely that voting along state lines would produce any candidate with a majority of the votes. (p. 75)

The Founders envisioned that in most cases the president would end up being chosen by the House of Representatives from the list of the top-five electoral vote recipients…Furthermore, there was no indication that the number of electoral votes received should carry any weight besides creating a list of the top five candidates…The process was not intended to be democratic. (p. 76)

I found the issues discussed above to be of particular interest. But there is far more in the book to learn from, and often be surprised by, in comparison to what history courses usually teach.

America’s Evolution Away From Founding Values

Such issues include the evolution of parties, the influence of Andrew Jackson, who “fought for democracy, but, ironically, the result of making the nation’s government more democratic has been to expand the scope and power of government in response to popular demands for govern programs,” (p. 91) which “the Founders foresaw and tried to guard against by limiting the role of democracy in their new government,” (p. 91), the War Between the States (“the single most important event in the transformation of American government,” (p. 93) including the elimination of state succession as a real possibility, the Reconstruction Era amendments, the origins of interest group politics, the evolution of federal regulatory power, the evolution of the incentives of civil servants, the Sixteenth Amendment (income tax) as “a response to the demand for a larger federal government,” (p. 149) a different take on the 1920s, in which “[f]ar from representing a retreat from progressivism, the 1920s extended the now-established orthodoxy, (p. 154) added insight into the New Deal and the courts, Social Security as the “one New Deal program for the responsibility for fundamentally transforming the historical, constitutional role of the federal government,” (p. 175) how “The Great Society represents the ultimate triumph of democracy, because for the first time a major expansion in the scope of government was based on the demands of the electorate, with no extenuation circumstances” (p. 205), and far more.

In sum, there are very many good reasons to recommend Liberty in Peril. In it, Randall Holcombe provides not just a powerful and insightful look into crucial aspects of America’s evolution away from the principles of the revolution that created it but also an important warning:

Unfortunately, many Americans do not appear to fully understand these dangers as they continue to push the foundations of their government away from liberty and toward democracy. (p. 225)

Gary M. Galles is a professor of economics at Pepperdine University. His recent books include Faulty Premises, Faulty Policies (2014) and Apostle of Peace (2013). He is a member of the FEE Faculty Network.

This work is licensed under a Creative Commons Attribution 4.0 International License, except for material where copyright is reserved by a party other than FEE.

To make the ideas of liberty familiar, credible, and compelling to the rising generation.

FEE’s mission is to inspire, educate, and connect future leaders with the economic, ethical, and legal principles of a free society.