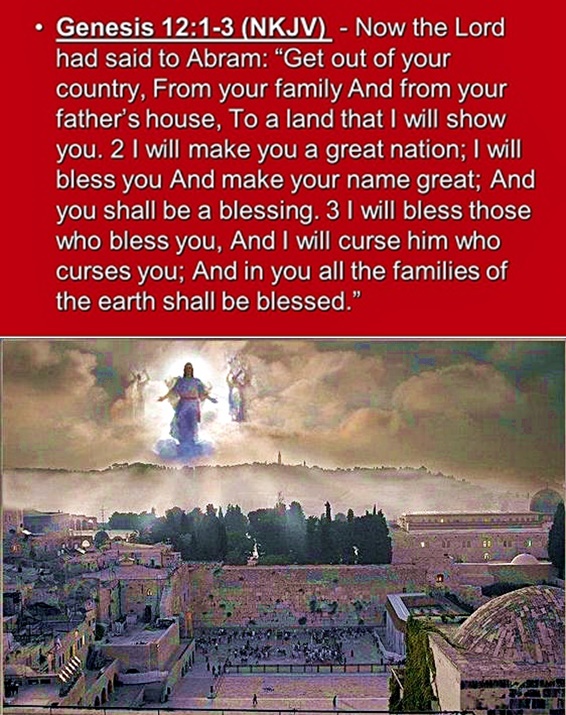 I am huge with support for Israel and the Jewish people. You might wonder why (though my Grandmother once told me I had a Jewish ancestry – I was an uncaring teen at the time and discussion is a bit sketchy in my memory). The reason is God’s Word hasn’t changed and God Almighty has designated the descendants of Abraham, Isaac (not Ismael) and Jacob as the Chosen People for the Land of Promise. That Land is known today as Israel. In Jesus Redemption is to the Jew first then the Gentile. I’m a believer in the mystery of prophetic double fulfillment. In simple terms that means an event prophesied in the Bible may appear to have taken place but a fuller event is still to come (the more secularist a Christian the less likely to believe in double fulfillment prophecy or Dual Prophecy): Modern Israel coming into existence and a unified Jerusalem under Israeli sovereignty are signs (many view Jesus speaking fig tree as symbolism of Israel – Matthew 24:32-33) of the Second Coming of Jesus Christ.

Yup, that makes me an authentic Christian Zionist. Bless Israel and you’ll be blessed. As a nation, this is one reason of the importance of America (and Americans for that matter) to be a blessing to Israel.

With my thoughts in mind, Jan Markell’s article below about Christian Pastors failing to talk and/or teach the importance of Israel is indeed a “Disturbing Trend”.

A Disturbing Trend: Does Anybody Care?

Interest in Israel is waning. Does anybody care?

In recent weeks, several publications have put out alarming stories that evangelical support for Israel is sinking — and especially among young people. The periodicals state that a new survey reveals that there is confusion about, or indifference to, the world’s only Jewish state.

It is really a two-pronged phenomenon. There is a decline in the interest in end-times (eschatology) and a decline in interest and support for God’s Covenant land and people by those who identify as a part of the today’s church.

The various articles indicate that young people are focused on social justice now. There is a perception that the Palestinians are “downtrodden, persecuted, and mistreated,” and therefore, sympathy is towards them. Israel is the “occupier.”

Adding to the survey were Joel Rosenberg and Chosen People Ministries. Rosenberg stated, “Unless the church gives younger believers a healthy, balanced, solidly biblical understanding of God’s love and plan for Israel, overall evangelical support for the Jewish state could very well plummet over the next decade as Millennials represent an ever-larger percentage of the overall church body.”

So who or what is to blame? May I suggest some of the following?

Pastors rarely teach or preach on the topic and thus it is not deemed as relevant. How can young people understand an issue if it is ignored?

Lynne Hybels at Christ at the Checkpoint

Events like “Christ at the Checkpoint” have painted Israel as the Mideast villain and bully rather than the one free society in that region. Prominent evangelicals and social justice promoters such as Lynne Hybels speak at this event.  So do Tony Campolo, Gary Burge, Jim Wallis, Hank Hanegraaff, Shane Claiborne, and others who attract younger followers.

Christianity Today says that at best, young evangelicals are “indifferent about Israel.” With such a non-stop barrage of anti-Israel propaganda, how can young minds sort through fiction to find the facts?

The Israeli newspaper Ha-aretz is running an article that states that young evangelicals don’t have the automatic support for Israel that their parents had. This is a generation that is suspicious of anything that is presented without explanation. They don’t want to be political pawns. They don’t adopt automatic views and positions. In order to connect them to Israel, we need to make a case for why they should support it. Future U.S. policy towards Israel is at stake!

All of this is happening as new and young members of the U.S. Congress, including one radical Muslim from Minnesota — Rep. Ilhan Omar — are taking a strong anti-Israel stand. Their anti-Semitism is not even subtle. How many younger people will Rep. Omar, Rep. Tlaib, and Rep. Ocasio-Cortez influence in the wrong direction?

While people, both young and old, can be disloyal and change sides, “He that keeps Israel neither slumbers nor sleeps.” (Psalm 121) God’s love and protection will never waiver for His covenant land and people.

How odd of God,

To choose the Jews;

But not as odd, as those who choose,

The Jewish God, but spurn the Jews.

A Disturbing Trend: Does Anybody Care?

You may pass on these items or have people sign up on  our website. You can access our radio programming from the last year at Complete Archives.  Programming goes back to 2010 at One Place. Also see the website for other options to catch the program, “Understanding the Times.”

About Jan Markell [Via this link: https://www.oneplace.com/ministries/understanding-the-times/]

Jan Markell founded Olive Tree Ministries in the 1980s to teach believers how to be watchmen on the wall and understand the times from a biblical perspective. She is the author of 8 books with the major Christian publishing houses. She has also produced a dozen DVDs, some of them aired on Sky Angel.  Her popular radio program is hearing on over 800 radio stations across North America. She hosts the largest Bible prophecy conference in America.