Wouldn’t it be good to know when the FBI knew the Steele Dossier was bogus and yet how often the bogus document was presented to a FISA Court for warrants to spy on President Trump during and after the 2016 election campaign? Judicial Watch is taking steps to configure the time frame especially since it is apparent FBI Director Christopher Wray has no intention to clean his house of corruption.

[T]he potential for illuminating the FBI’s activities is not too difficult to discern. Communications post-dating Steele’s time as an informant might reveal a great deal about why the FBI developed him as a CHS [confidential human source], his performance as a CHS, and why the FBI opted to terminate its relationship with him. Those records might either bolster or weaken Steele’s credibility as a source. That information, in turn, could provide a basis on which to evaluate the FBI’s performance of its law-enforcement duties, including its judgment in selecting and relying on confidential sources, especially in connection with such a politically sensitive subject. Of course, the records Judicial Watch speculates about might not even exist—and even if they do, they may not reveal anything significant about the FBI’s operations. But that they might do so makes them a matter of potential public interest.

The court initially ruled in favor of a DOJ “Glomar” response to Judicial Watch’s March 8, 2017, FOIA request stating that it could “neither confirm nor deny the existence of records responsive to [Judicial Watch’s] request.” On March 26, 2018, subsequent to the declassification of records revealing Steele’s role as an FBI informant and his firing by the FBI in November 2016, the court reopened the case at Judicial Watch’s request. The FBI, however, continued refusing to search for records post-dating Steele’s dismissal, contending that any records discovered would be exempt from disclosure on privacy grounds.

In Friday’s ruling, Judge Cooper held that, on balance, any privacy interests Steele may have in keeping the documents secret are outweighed by the public’s interest in disclosure:

Steele’s privacy interests are far different from those courts usually consider under Exemption 7(C), where disclosure would make public for the first time an individual’s affiliation with law enforcement, whether as agent, cooperator, or target… The balance therefore tilts in favor of disclosure. Accordingly, the Court will order the FBI to conduct a search for records post-dating Steele’s service as a confidential source.

“The court was right to turn aside the FBI’s fake concerns for Clinton spy Christopher Steele’s privacy and order the agency to search for more records on its use of Steele and his Dossier to target President Trump,” stated Judicial Watch President Tom Fitton. “That the FBI is still protecting Christopher Steele and the Clinton spy ring at Fusion GPS should tell you there is much more corruption to be exposed in the coup efforts against President Trump.”

Documents previously produced in this lawsuit show that the FBI paid Steele at least 11 times during the 2016 presidential campaign and then fired him for leaking.

Judicial Watch also uncovered smoking gun documents showing that former Associate Deputy Attorney General Bruce Ohr remained in regular contact with Steele after Steele was terminated by the FBI in November 2016 for revealing to the media his position as an FBI confidential informant.

Through another FOIA lawsuit, Judicial Watch obtained emails of Bruce Ohr discussing information obtained through his wife Nellie, which he passed on to the FBI. The information contained anti-Trump dossier materials, including a spreadsheet that tries to link President Trump to dozens of Russians. These Justice Department documents also contain Russia-related emails sent from Nellie Ohr to high-ranking DOJ official Lisa Holtyn during the period Ohr worked with anti-Trump firm Fusion GPS, which contracted with Steele to create the Trump Dossier. Holtyn at the time was a top aide to Bruce Ohr.

Judicial Watch is a 501(c)(3) nonprofit organization. Contributions are received from individuals, foundations, and corporations and are tax-deductible to the extent allowed by law. 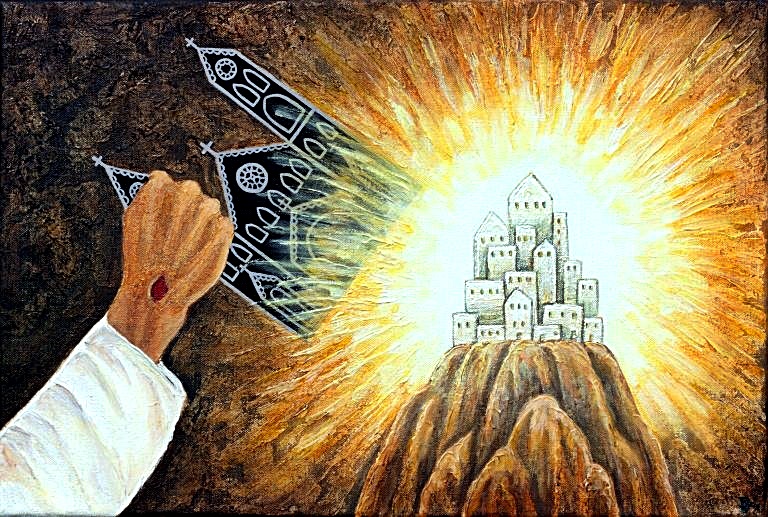 If there is a tragedy in American history, it should be a look back on the criminality that exists amidst the Democratic Party. The Dems are transforming America at all costs away from our nation’s Founding Principles and the Christian Heritage that has been the essence of a moral backbone. The Dems have committed crimes excused by the MSM to perpetuate a transformed America. The transformation tarnishes any light inspiring immigrants to become Americans based on self-reliance. Rather the Dem paradigm is to attract immigrants inspiring socialist handouts & government dependence.

The former moral backbone once led President Reagan to call American Heritage a shining city on a hill.

President Reagan spoke of people coming to America to work hard to become a part of American success and NOT promote a Socialist government dependency. The Dem transformation increasingly dims the light that has made America great. An extinguished light on a hill merely transform America into a government by ruling elitists instead of by WE THE PEOPLE.

VIDEO: Shining City Upon A Hill

I also like this quote writing about President Reagan:

Central to this hope and faith in the American people was Reagan’s belief in American exceptionalism. He restored that concept to the national vocabulary in a time when many Americans—and certainly the nation’s political, educational, and cultural elites—had lost sight of it.

In his election eve address in 1980, the day before he would be elected president, Reagan described his vision of America by referring to the aims of the Puritans who settled Massachusetts in the 1600s:

I have quoted John Winthrop’s words more than once on the campaign trail this year—for I believe that Americans in 1980 are every bit as committed to that vision of a shining “city on a hill” as were those long-ago settlers….

These visitors to that city on the Potomac do not come as white or black, red or yellow; they are not Jews or Christians; conservatives or liberals; or Democrats or Republicans. They are Americans awed by what has gone before, proud of what for them is still … a shining city on a hill.

For Reagan, as for the Puritans, exceptionalism was more than just a natural process or a product of the nation’s history and geographical position. As far back as 1952, presenting the commencement address to William Woods College, Reagan invoked the idea of America as a nation chosen by God for a special purpose: “I, in my own mind, have always thought of America as a place in the divine scheme of things that was set aside as a promised land.”

Winthrop, it is crucial to note, was not saying that America is by nature great. Quite the contrary, Winthrop’s point was that the American colonies, having been explicitly founded as free, Christian states, bore a responsibility, indeed a burden, unique among the nations of the world:

For we must consider that we shall be as a city upon a hill. The eyes of all people are upon us. So that if we shall deal falsely with our God in this work we have undertaken, and so cause Him to withdraw His present help from us, we shall be made a story and a by-word through the world. We shall open the mouths of enemies to speak evil of the ways of God, and all professors for God’s sake. We shall shame the faces of many of God’s worthy servants, and cause their prayers to be turned into curses upon us till we be consumed out of the good land whither we are going. (RONALD REAGAN’S AMERICAN EXCEPTIONALISM; By S.T. Karnick; The Heartland Institute; 2/6/17)

AND YET America’s Dems and their duped supporters have come severely close into turning America into a cesspool of criminal elitists who have placed themselves above the rule of law.

The ONLY way I see a reversal of this normalized crime-ridden political curse is to at least have the Dem criminals face the decision of a jury.

BEGINNING WITH but not limited to Crooked Hillary and clan. The Gateway Pundit reporting on Tom Fitton’s quest to find the truth points out that President Trump’s DOJ and State Department are actively thwarting the discovery of the truth.

President Trump needs to step up to the 2016 campaign rhetoric and clear the way to “lock her up”. The Mainstream Media (MSM) clears little for the truth because they have shown themselves to be the propaganda wing of the criminal Dems.

NO MATTER how President Trump proceeds, he will be castigated by the MSM and once loyal Dem Party members in Congress. I can just say, “Screw’em and proceed President Trump!” 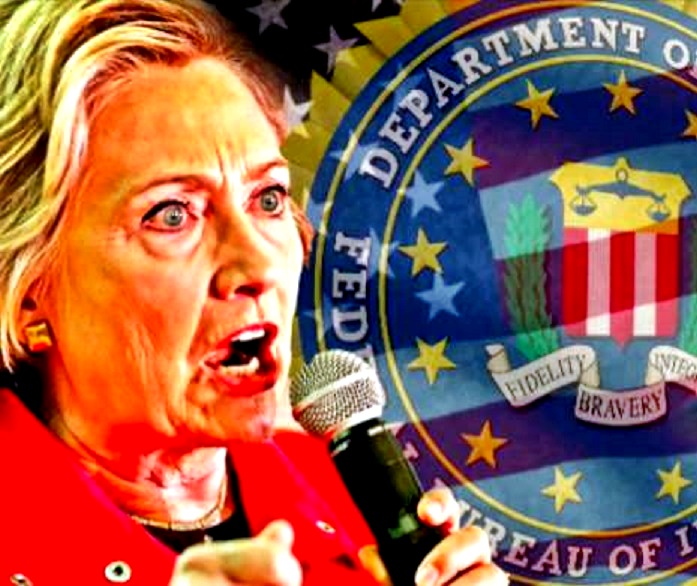 Tom Fitton, president of Judicial Watch revealed on Wednesday that the DOJ is colluding with Hillary Clinton email scandal witnesses to thwart court-ordered discovery to stop the watchdog’s efforts to gather evidence.

Judicial Watch appeared in a DC federal court last month on a motion to compel more testimony from Hillary Clinton as well as to make public video recordings of depositions of top Clinton aides such as Huma Abedin and Cheryl Mills.

The court ruled that Hillary Clinton must answer more questions about the setting up of her private server.

Hillary Clinton arrogantly answered that she set up the private server out of “convenience.”

Earlier this month, a federal court blasted the DOJ and State Department on Hillary Clinton’s emails and ordered a discovery plan in 10 days as to whether Hillary’s private email system was intentionally set up to evade FOIA requests and lawsuits.

… the Court ORDERS the parties to meet and confer to plan discovery into (a) whether Hillary Clinton’s use of a private email while Secretary of State was an intentional attempt to evade FOIA; (b) whether the State Department’s attempts to settle this case in late 2014 and early 2015 amounted to bad faith; and (c) whether State has adequately searched for records responsive to Judicial Watch’s requests.

Terming Clinton’s use of her private email system, “one of the gravest modern offenses to government transparency,” Lamberth wrote in his MEMORANDUM OPINION:

Although Judicial Watch refuses to back down, the Justice Department is actively working to stop the watchdog’s efforts to gather evidence in federal court.

Tom Fitton was furious that the DOJ is working to block their discovery efforts.

You can support Tom Fitton and the Judicial Watch team by clicking here.

This is a breaking story…please [go to TGP] page for updates.

Still a Shining City on a Hill?