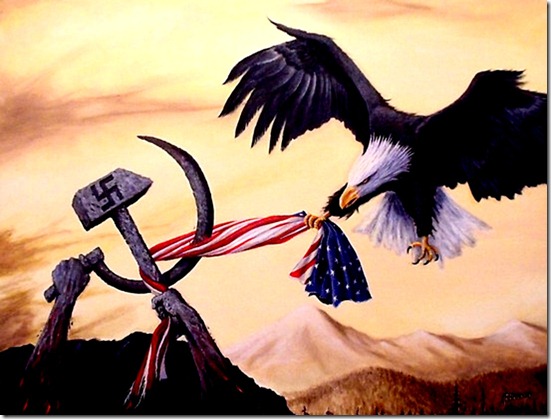 There was a time in America that being a Communist or Marxist sympathizer was an expression of un-American treason. Senator Joseph McCarthy was initially looked upon as an American hero for exposing Soviet-Communism in the U.S. government. After McCarthy’s vigilance began to spill-over into the First Amendment protected Right to believe in Marxist ideology outside of the direct manipulation of the old Union of Soviet Socialist Republics (USSR), then Liberal Democrats and Center-Left Republican began an agenda to smear the character and agenda of Senator Joe McCarthy. McCarthy was publically transformed from an American hero into an American witch hunter. Witch hunting of course is viewed as a profession of creating lies to convict people of crimes that really do not exist.

For example in the ‘real world’ there is no such thing as witches with supernatural powers to wiggle their noses and speak a few Latin words and create some evil ex nihilo. McCarthy’s agenda was painted as finding Communist spies ex nihilo from influential people that believed in the principles of Karl Marx or flirted with the idea Communist utopianism in their youth out of a dissatisfaction of a Free Market society favoring the opportunity of individuals utilizing hard work for prosperity while the less entrepreneurial and oft time poor people seemed stuck in lower income working class misery.

Painting McCarthy as a Communist witch hunter was the beginning of the slow acceptance of stealth Marxism in American society. Organizations like the American Civil Liberties Union (ACLU – See Also HERE and HERE) used their Marxist sympathies to aid in the eradication of Christian morals in America which has paved the way to removing prayer from schools, making abortion-murder on demand as a birth control method normal, validating ungodly homosexuality as normal rather than as an abomination toward God, using the tax code to prevent Ministers of the Gospel from endorsing godly political candidates for Office and now the pervasive anti-Christian of entrenched Liberals has emboldened more attacks on Christianity in America.

Prayer at public sports events (as in Public Schools and Colleges) or City Council meetings is being attacked with the threat of litigation that Public Schools and small to medium sized cities cannot afford to litigate. In these cases Marxist ideals are infused into our Free Market society ironically because the financial clout of Leftist-minded organizations and individuals can out-fund the local Public Schools or the Local Governments. It is the use of the Free Market to destroy the Free Market Liberty society.

It is time to publicly rehabilitate the image of Joe McCarthy where he was correct and to criticize him where he was incorrect on a First Amendment basis. It was evil for the old Soviet Union to infiltrate our government to bring down the U.S. Constitutional government from within. It was wrong for McCarthy to brand people as a threat to the nation because of a mere belief in Marxism. As much as Marxism is against the Liberty principles of initiated by America’s Founding Fathers, it is a First Amendment Right to believe in Marxist principles.

And yet when dedicated Marxists utilize Liberty to terminate Liberty via deception to purposefully eradicate the Constitution, we who still believe in Liberty must begin to take a stand even if Marxists have convinced society it is politically incorrect to take public stands that contradict stealth Marxist principles.

For example preventing Christianity influencing government is our Constitutional Right. Marxists may take the words of Thomas Jefferson that he wrote to Danbury Baptists that the government has no Right to enfranchise or disenfranchise a Church in the Federal Government; those words are not in the Constitution. Not only that, but Jefferson was not one of the principle framers of the Constitution.

Another example is the use of a Left-minded Judiciary to redefine the Constitution as a Living parchment in which it can be interpreted according to what the Left find culturally relevant in the present. This kind of Judicial fiat creates Law unconstitutionally. The Constitution that frames the three branches of government that exist with checks and balances under the concept that not any government branch has absolute power limits the Judiciary to only interpreting Law and NOT Bench-Legislating Law.

Marxist utopians such as our President Obama and the Dems intend to use the Living Constitution deception to terminate portions of the Constitution and current Amendments to mean something not Originally Intended (See Also HERE) as the Law.

And this is where the accusation that our President is a Manchurian Candidate comes into play:

The Manchurian Candidate (1959), by Richard Condon, is a political thriller novel about the son of a prominent US political family who is brainwashed into being an unwitting assassin for a Communist conspiracy.

The novel has been adapted twice into a feature film by the same title, in 1962 and again in 2004. (Wikipedia)

I am not such a Conspiracy Theorist that I believe President Obama is a brainwashed individual from a Communist nation. The international vision of Soviet-Communism collapsed at the dissolution of the USSR into separate sovereign nations shedding off the hegemony of a Russian dominated Communist government. The only other Communist Super Power that still exists is more interested in its National Interests that the global domination of Maoist-Marxist world. The People’s Republic of China (Red China) is interested in regional hegemony and confronting other powers that may conflict with those regional National Interests. For Red China that may include a wary eye on Russia as much as on the USA. It is only when Russia’s and China’s National Interest intersect in keeping the USA at bay do Russia and China appear as friends against the USA.

I am such a Conspiracy Theorist that President Obama is involved in some sort of nefarious Marxism to change American culture to seem closer to Marxist utopianism rather than our Founding Fathers’ concept of Life, Liberty and the Pursuit of Happiness based on a combination of Christian Morality and Greco-Roman political thought.

Whether or not Obama’s Marxist-Socialist utopianism is based on the individual precepts he developed from the Marxist influence of family and mentors OR from a network of stealth Marxist Global Elitists is something I cannot put my finger on. Whether Obama’s change agenda is individual or networked is irrelevant. That which is relevant is Obama has a Gramsci-like agenda to transform America away from its roots into a Communist utopia in the near future or to create a foundation for future Marxist-Elitist to build on.

That is what makes President Barack Hussein Obama a Manchuria Candidate.

The inspiration for these thoughts is an article by Kris Zane found at Western Center for Journalism (WCJ) entitled – you got it – The Manchurian Candidate.