Klingenschmitt, as WND has reported, has fought an extended battle with the Navy over its restrictions on religious expression by its chaplains. He appeared and delivered a public prayer “in Jesus’ name” at a White House rally last winter and was court-martialed for that. The Navy convicted him of failing to follow a lawful order because his superior didn’t want him praying “in Jesus’ name.” (NAVY DISMISSES CHAPLAIN WHO PRAYED ‘IN JESUS’ NAME’; By BOB UNRUH; WND; 01/12/2007 1:00 AM)

Dr. Klingenschmitt chose to obey the Lord over an absurd Navy order and got his walking papers for doing so. The silver lining was Congress passed legislation to pray in the Name of Jesus in 2007 (Ibid.). The bad news was the Navy never reinstated his commission as a Chaplain.

Anyone that stands with the principles of over any civil employer, government employer and/or military employer; is awesome.

In saying all that, I received Dr. Klingenschmitt’s newsletter today. The subject matter is about the Sutherland Springs Massacre, the victims’ faith and an interview with Matt Barber over the atrocity. 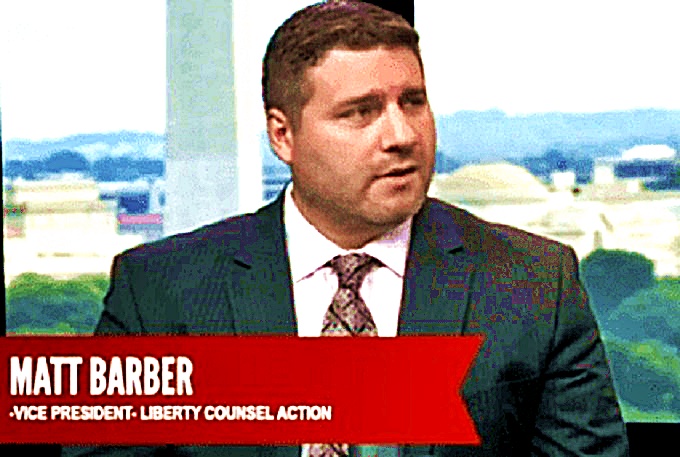 A heads up: the good chaplain fund raises by suggesting you join a mass fax of which money is required to send.

I just had the privilege of interviewing Christian attorney Matt Barber about the horrific shooting and death of 27 Christians in Texas, killed because of their Christian faith.

1)  The victims were martyrs for Jesus Christ, including the 14-year old pastor’s daughter.
2)  The atheist shooter Devon Kelley hated Christians and repeatedly said so.
3)  The neighbor hero Stephen Willeford was a first-responder who shot the bad guy.
4)  The left blames the NRA but Kelley was not NRA and Willeford was.
5)  The left shoots Christians and then demands Christians disarm without self-defense.

Sadly, this is a time of great mourning.

We choose to love and forgive our enemies, and yet as we mourn, we also arm ourselves in self-defense to prepare for the left’s coming war against God and the Church.

If only the shooter Kelley had heard the gospel of Jesus’ love from a chaplain before his bad-conduct discharge.  Let’s petition Congress for chaplains rights to pray “in Jesus’ name”:

Interviews with those who knew the Texas church shooter now reveal his beliefs.

“According to former classmates of Devin Patrick Kelley, the 26-year-old man who killed 26 people and injured over 20 others in a church in Sutherland Springs, Texas on Sunday was an avowed atheist who mocked those who believed in God,” reports DailyWire.

“DailyMail.com spoke with former classmates who attended New Braunfels High School with Kelley. They all told a similar story: Kelley — who had a history of violence and was given a ‘bad conduct’ discharge from the Air Force — ‘preached atheism,’ acted ‘creepy’ and ‘weird,’ and seemed to hold a ‘very negative’ worldview.

“He had a kid or two, fairly normal, but kinda quiet and lately seemed depressed,” Kelley’s former high school classmate Patrick Boyce told DailyMail.com. “He was the first atheist I met. He went Air Force after high school, got discharged but I don’t know why. I was just shocked [to hear the news].”

“Another former classmate, Nina Rose Nava, told the outlet that Kelley ‘was different in school and creeped me out,’ but she added that she ‘never’ would have thought he would do ‘such a horrific thing.’…It’s not something I expected from him. He was an outcast but not a loner. He was popular among other outcast[s].”

“Though Nava said the two hadn’t spoken in person since high school, until recently they had been friends on Facebook. In a post, she said she had ‘just deleted him’ from her Facebook account because she ‘couldn’t stand’ his insulting posts.

“[I]n complete shock! I legit just deleted him off my [Facebook] cause I couldn’t stand his post,” wrote Nava. “He was always talking about how people who believe in God [were] stupid and trying to preach his atheism.”
On Sunday, Kelley — armed with a Ruger rifle and several rounds of ammunition and wearing black tactical gear and a ballistic vest — opened fired during the 11 a.m. service at First Baptist Church in Sutherland Springs, killing 26 and injuring 24, making it the deadliest mass shooting in the history of Texas. His shooting spree came to an end when a heroic armed man got into a shootout with Kelley and forced him into a high speed chase. Kelley died of what authorities believe to be a self-inflicted gun wound.

[Dr. Chaps’ comment:  If only a chaplain had reached this confused man in the Air Force with the power of Jesus’ name.  Atheists like Kelley believe there is no God, no consequence for sin, and no ultimate justice for the victims of this horrific murderer.  They will discover they’re wrong, and there is a God, and His justice will prevail.]

God Bless you, in Jesus’ name,

“A voice calling out in the wilderness of this world, Chaplain Gordon James Klingenschmitt, PhD is a man on a mission.  As a statesman and Christian activist, ‘Chaps’ wants to liberate the world with no-nonsense messages of truth and prayers of discernment.  Through his strong personal convictions and direct communication style, he reaches into the hearts of people to help them become active disciples of Jesus, through television, prayer, petitioning, political activism, and education, drawing others toward their highest purpose and destiny.”

Dr. Chaps is TV news anchor of PIJN NEWS, a daily 1/2 hour show that reports the news, discerns the spirits, and prays the scriptures, in Jesus’ name

SUMMARY: Gordon James Klingenschmitt (aka “Dr. Chaps”) is the national TV show host of PIJN NEWS on the NRB network which airs in 54 million homes daily, former State Representative having won election to the Colorado legislature, occasional affiliate faculty at Colorado Christian University, Air Force Academy graduate in Political Science, and made national headlines as the former Navy Chaplain who dared to pray “in Jesus’ name.”   An ordained Pentecostal minister, he earned his PhD in Theology from Regent University and is ranked among “the top 1% most endorsed in United States for Preaching” by Linkedin in 2013.

He is now a motivational speaker, telling his true story of … READ THE REST