There is a mantra you can judge politicians of the Leftist persuasion; viz., Dems Lie. I’m focusing on Dem Party politicians but when Dem voters support Dem liars, WHAT does that say about a Dem voter?

Yesterday I picked up an Ann Corcoran post on the Dem liar Somali refugee who probably lied her way into American citizenship then managed to get herself elected to the House of Representative in a District in Minnesota dominated by Muslim refugees.

How does a lying-crooked Muslim gal get elected in Minnesota:

In Minnesota’s 5th Congressional District, Ilhan Omar — a Somali immigrant — won with 78 percent of the vote in midterm elections despite her far-left radical record.

Omar’s district has become increasingly foreign-born with now almost 15 percent of the region being born outside of the U.S. As MPR News notes, more than 35 percent of the district is nonwhite and there are 22,000 more foreign-born residents living in the district since Rep. Keith Ellison — the first Muslim elected to Congress — was first elected in 2008. (Districts with Large Foreign-Born Populations Sent Far-Left Democrats to Congress; By John Binder; BREITBART; 11/8/18)

FBI statistics reveal that Minnesota’s fifth congressional district, which is represented by Rep. Ilhan Omar and includes the urban area of Minneapolis, is the jurisdiction with the highest rate of terrorist recruitment in the United States.

Minnesota is reported to have the highest Somali population in the United States, with current population estimates breaching 100,000. This demographic has proven to be connected to terror-related activities, Fox News reports,

‘“More men and boys from a Somali American community in Minneapolis have joined — or attempted to join — a foreign terrorist organization over the last 12 years than any other jurisdiction in the country.

FBI stats show 45 Somalis left to join the ranks of either the Somalia-based Islamic insurgency al-Shabab, or the Iraq- and Syria-based ISIS combined. And as of 2018, a dozen more had been arrested with the intention of leaving to support ISIS.”’ (Ilhan Omar’s Minnesota Congressional District Is The Terror-Recruiting Capital Of The US; By Matt M. Miller; Daily Caller; 2/18/19 1:52 PM ET) 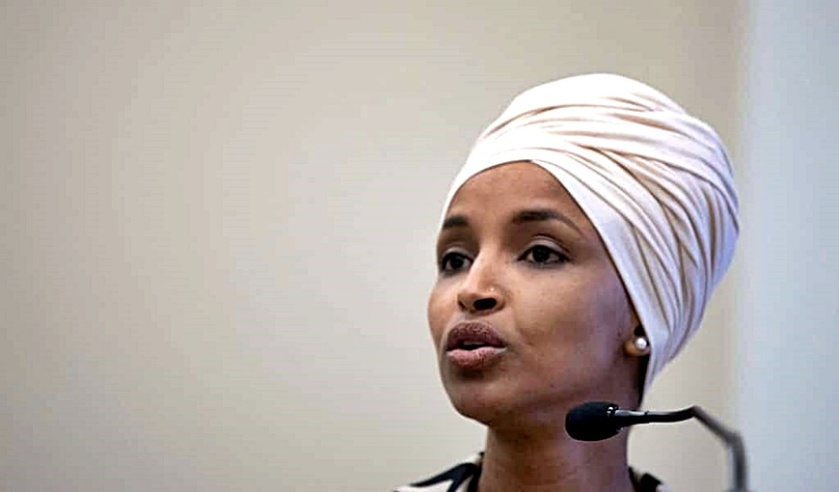 US Congresswoman Ilhan Omar is accused of marrying her brother in a case of immigration fraud (Photo: Tasos Katopodis/Getty Images)

The latest controversy over Congresswoman Ilhan Omar appears to confirm a long speculated rumor that the Somali American refugee married her brother in order to get him papers so he could say in the United States.

Abdihakim Osman, a Somali community leader who was close to Omar’s first husband Ahmed Hirsi, stepped forward to confirm the allegations are true.

Osman, who runs a Facebook page called Xerta Shekh and is shown in photographs with Ilhan Omar’s first husband Hirsi, commented on the abnormalities around the second marriage to Ilhan Omar’s brother Ahmed Elmi.

Speaking with the Daily Mail, Osman said that Omar’s first marriage to Ahmed Hirsi was a big Islamic wedding, which brought together two clans. That wedding wasn’t registered with the state, as is not unusual in the Somali community, .

Then, Osman said, a second, legally registered marriage quietly took place between Ilhan Omar and her brother Ahmed Elmi. The marriage was reportedly performed outside the community by a Christian minister.

In fact, the community did not even know about a second wedding until the media turned up a second marriage certificate. While legally married to her brother, Ilhan had another child with her first husband Ahmed Hirsi.

Osman claims Ilhan Omar and her first husband confided to Osman that Ahmed Elmi was Ilhan’s brother who was living in London and mixing with “bad influences that the family did not like … so they sent him to Minneapolis as a ‘rehab.’”

It’s unclear what the “bad influences” were. However, Osman notes that at the time Elmi was “very feminine in the way he dressed — he would wear light lipstick and pink clothes and very, very short shorts in the summer. People started whispering about him.”

Ilhan Omar is denying the allegations, implying that Osman is being paid off to “generate fake news.” Osman has taken to his Facebook page in a post condemning that accusation and had some choice things to say about Ilhan Omar:

Dalia Al-Aqidi, one of Ilhan Omar’s opponents in the upcoming congressional race for Minnesota’s fifth district, challenged Omar to prove the allegations were untrue.

This latest news about Omar only adds another layer to the legal trouble the congresswoman faces, with at least three federal agencies conducting investigations against her.

While the authorities investigate this immigration fraud, there are deeper issues coming to the surface.

“Why was Minneapolis seen as ‘rehab’ for Ahmed Elmi’s implied sexual orientation? Is it because the community is largely closed off to integration and assimilation to broader American values?

The controversy surrounding Ilhan Omar has always raised this issue, largely attacked by mainstream media for being xenophobic toward Minnesota’s Somali community. However, the more that people like Osman speak out, the more we can better understand how America is failing its immigrant communities by allowing them to remain in closed-off enclaves.”

Clarion Project is a non-profit organization that educates the public about the dangers of ideological extremism.

The ClarionProject.org web site delivers news, expert analysis, videos and more about Islamism, white supremacy, neo-Nazism, Antifa and other extremist ideologies while giving a platform to anti-extremist activists to speak out and have their voices heard.