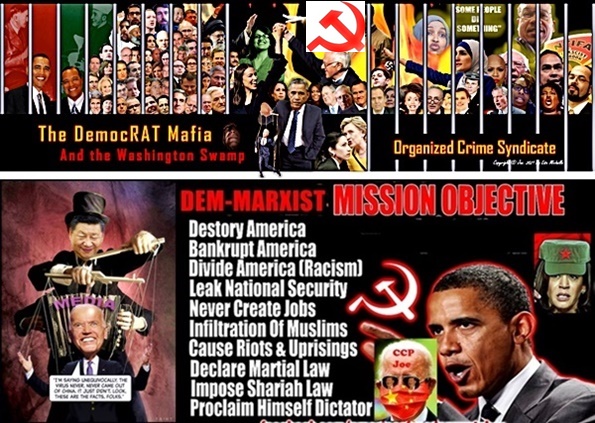 Here’s a quote from Miele’s article I pray begins waking Americans that ‘We The People’ are being transformed into mindless obedient Sheeple:

“If Americans can’t have liberty, we can’t have America either — at least not one that is distinguishable from China. The time has come to make a choice.”

Miele then lays the groundwork that America’s Establishment Oligarchs are waging a war against ‘We The People.’ Miele only hints that the Establishment are the lying-cheating-stealing Dem-Marxists, RINOs, Establishment Republicans and Deep State unelected Bureaucrats – SO I JUST SPELLED IT OUT … even if it’s only my opinion rather than Frank Miele’s specific intention.

I didn’t declare war on the establishment; it declared war on me.

It declared war on me when it supported energy policies that could enrich Saudi Arabia and Russia and would cost me more money at the gas pump or on my power bill.

It declared war on me when it told me my ideas weren’t worthy of debate and discussion or that they were even so dangerous they couldn’t be shared publicly.

It declared war on me when it used the police powers of the FBI and CIA to first spy on a presidential candidate and then worked to undermine the administration of that candidate after he was elected.

It declared war on me when it told me my religious beliefs did not deserve the protection of the First Amendment.

It declared war on me when it told me boys could compete against girls in high school sports and that they could shower together afterwards.

It declared war on me when it offered citizenship to illegal aliens and shipped American jobs to China.

It declared war on me when it mocked the usefulness of a wall on the Mexican border and simultaneously put up a razor-wire fence around the Capitol.

It declared war on me when it tried to defund the police so that millions of Americans would be left defenseless against mobs from antifa and Black Lives Matter.

It declared war on me when it said America was never great.

It declared war on me when it told my children they are not good enough because they are white.

It declared war on me when it said that defending the Constitution’s rules on federal elections is sedition.

It declared war on me when it told me that I was a domestic terrorist if I didn’t believe the government’s official pronouncements about elections, about free speech, and about right and wrong.

Let’s just say it plainly: The establishment declared war on me and on all conservative Americans when it decided that leftist orthodoxy was more important than the Constitution.

Don’t believe me? Fine, why should you believe a Trump supporter? You’ve been indoctrinated by the national media, Big Tech oligarchs, the Democratic Party, and academic elites to believe without questioning that people like me can’t be trusted. But you don’t have to take my word for it. Listen instead to John Brennan, the former CIA director under President Obama, who speaks authoritatively for the Deep State:

He said on MSNBC that “the members of the Biden team who have been nominated or have been appointed, are now moving in laser-like fashion to try to uncover as much as they can about what looks very similar to insurgency movements that we’ve seen overseas, where they germinate in different parts of the country and they gain strength and it brings together an unholy alliance frequently of religious extremists, authoritarians, fascists, bigots, racists, nativists, even libertarians.”

This “guilt by labeling” is the antithesis of fair play or justice. It is a convenient mechanism for the ruling class to herd people into identity clusters so that individual rights can be supplanted by group responsibility. If this reminds you of China’s Cultural Revolution, you are not wrong. The ruling class wants you to conform, confirm and comply. If you step outside the lines, be prepared to be shamed, silenced and ostracized. [Bold text by Blog Editor]

A shocking example was provided Wednesday when Douglass Mackey of Delray Beach, Fla., was arrested for creating memes that allegedly misled voters in 2016 to think they could vote by texting instead of by actually going to the polls. This is the equivalent of arresting Sacha Baron Cohen for exposing the gullibility of the rich and famous. The FBI offered no evidence that Mackey actually convinced anyone not to vote, but even if it did, so what? Would you rather live in a country where the FBI is hunting down pranksters — four years after the supposed transgression — or a country where voters are expected to be able to recognize a joke when they see one?

But nothing can be taken for granted any more. The people — and even their representatives and senators — are considered enemies of the state because they hold opinions that don’t meet the standards of Joe Biden or (this is even scarier!) Jake Tapper.

No wonder the people are starting to rise up and rebel against the plutocracy. It’s not “We the Oligarchs” who are the source of power in the Constitution, but “We the People,” yet the ruling establishment has forgotten that. If people like Donald Trump and Douglass Mackey are deemed to be “enemies of the state,” then those who would suppress them and their freedoms must be considered “enemies of the people.” [Bold text by Blog Editor]

A house divided against itself cannot long stand, but if there is to be a truce it will not come from submission, but from a recognition that all people are created equal, that they all have certain inalienable rights, and that among those are life, liberty and the pursuit of happiness. Those words were worth fighting for once. Are they worth fighting for today? [Bold text by Blog Editor]

I don’t know, but I do know this: If Americans can’t have liberty, we can’t have America either — at least not one that is distinguishable from China. The time has come to make a choice. [Bold text by Blog Editor]

Frank Miele, the retired editor of the Daily Inter Lake in Kalispell Mont., is a columnist for RealClearPolitics. His new book “How We Got Here: The Left’s Assault on the Constitution” is available from his Amazon author page. Visit him at HeartlandDiaryUSA.com to read his daily commentary or follow him on Facebook @HeartlandDiaryUSA or on Twitter or Parler @HeartlandDiary.