Sidney Powell acting on behalf of We The People benefitting President Trump is opening the Kraken gates. If the Constitution and the rule of law is to be preserved, the Courts must exact judicial law against criminals perpetrating election/voter fraud. A judicial failure is a shredded Constitution and rule of law. 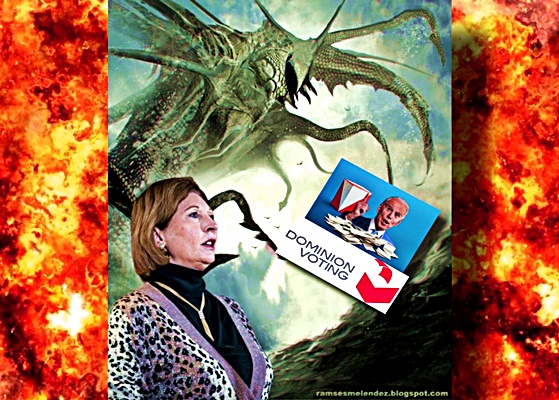 The Kraken came down to Georgia on this Thanksgiving Eve in the form of a 104 pg BOMBSHELL complaint exposing the massive fraud that overwhelmed the 2020 Georgia Elections. Georgia, you are most certainly on our minds. Link to filing to come, stay tuned!

The Kraken came down to Georgia on this Thanksgiving Eve in the form of a 104 pg BOMBSHELL complaint exposing the massive fraud that overwhelmed the 2020 Georgia Elections. Georgia, you are most certainly on our minds. Link to filing to come, stay tuned! @SidneyPowell1 @LLinWood

UPDATE — HERE IS A COPY OF THE FILING.

Here’s one of the BOMBSHELLS in the report:
They are calling for 96,000 votes to be tossed!
page 10

Additionally, incontrovertible evidence Board of Elections records demonstrates that at least 96,600 absentee ballots were requested and counted but were never recorded as being returned to county election boards by the voter. Thus, at a minimum, 96,600 votes must be disregarded. (See Attached hereto, Exh. 9, R. Ramsland Aff.)

For these reasons, Plaintiff asks this Court to enter a judgment in their favor and provide the following emergency relief:

Jim Hoft is the founder and editor of The Gateway Pundit, one of the top conservative news outlets in America. Jim was awarded the Reed Irvine Accuracy in Media Award in 2013 and is the proud recipient of the Breitbart Award for Excellence in Online Journalism from the Americans for Prosperity Foundation in May 2016.

Outlines jurisdictional issues that will need to be addressed

The 11th Circuit Court of Appeals on Wednesday granted Lin Wood’s emergency motion seeking an emergency review of a lower court’s decision that had rejected his efforts to delay the vote certification in Georgia. However, the court said that the appeal could only proceed if Wood could address certain jurisdictional issues.

“We The People delivered a historic landslide win for [President Donald Trump] in GA & nationally. We The People will not allow it be stolen.”

The questions come after Georgia’s Gov. Brian Kemp and the state department certified the state’s election results on Nov. 20. In an announcement streamed online, Kemp did not clearly endorse the results but said the law required him to “formalize the certification, which paves the way for the Trump campaign to pursue other legal options and a separate recount if they choose.”

Poll workers across the state began a machine recount of roughly 5 million votes on Nov. 24, which the Trump campaign requested to be performed in accordance with Georgia State Law and the U.S. Constitution after an earlier hand audit was criticized for not verifying signatures on ballot envelopes.

Prior to the certification, Wood had filed a lawsuit (pdf) on Nov. 13 against Georgia Secretary of State Brad Raffensperger and other state officials. He argued that an agreement earlier in March between election officials and the state’s Democratic Party that changed the process of handling absentee ballots in Georgia is unconstitutional.

The agreement could result in absentee ballots cast in the 2020 election being invalidated, the filing said. As such, the counting of absentee ballots for the general election in the state is therefore “improper and must not be permitted,” the suit argued.

Under the U.S. Constitution, only state legislatures and Congress can prescribe the “times, places, and manner of holding elections.”

On Nov. 17, Wood filed an emergency motion (pdf) for a temporary restraining order seeking to delay the vote certification in Georgia. Judge Steven Grimberg of the U.S. District Court for the Northern District of Georgia dismissed the effort on Nov. 19, saying that Wood lacked legal standing as an individual voter to challenge Georgia’s election procedures.

Wood then filed an appeal to the 11th Circuit on Wednesday, seeking an emergency review of Grimberg’s decision.

“Appellant requests that this Court grant expedited briefing on its appeal from the District Court’s decision denying the Emergency Motion for a Temporary Restraining Order,” the filing (pdf) read. “Appellant’s underlying action relates to the integrity of election procedures in the 2020 Presidential General Election in the State of Georgia, particularly as those procedures were fundamentally and irredeemably flawed, from this Constitutional deviation.”

Janita Kan contributed to this report.

Attorney Sidney Powell filed a federal lawsuit late on Nov. 25 that alleges “massive election fraud” and multiple violations of the Constitution and Georgia’s state laws in the 2020 general election, as well as issues pertaining to Dominion Voting Systems.

The civil action claims that the purpose of the alleged actions was for “illegally and fraudulently manipulating the vote count to make certain the election of Joe Biden as president of the United States.” A similar, separate suit was filed in Michigan.

The Georgia suit (pdf) was filed in the U.S. District Court Northern District of Georgia, Atlanta Division, against Gov. Brian Kemp, Secretary of State Brad Raffensperger, and other election officials.

The suit seeks to compel the court to invalidate the election results in Georgia. It was filed on behalf of plaintiffs including Republican Party nominees for the Electoral College, Cobb County Republican Party Chairman Jason Shepherd, and the assistant secretary of the state Republican Party, Brian Jay Van Gundy.

The 104-page complaint argues that “incontrovertible evidence Board of Elections records demonstrates that at least 96,600 absentee ballots were requested and counted but were never recorded as being returned to county election boards by the voter. Thus, at a minimum, 96,600 votes must be disregarded.”

According to the suit, fraud also was allegedly “executed by many means” but the “most troubling, insidious, and egregious” way was the “systemic adaptation of old-fashioned ‘ballot-stuffing.’” It alleges computerized ballot-stuffing and manipulation by software created and run by domestic and foreign actors. The complaint cited affidavits from multiple witnesses, documentation, as well as expert testimony that raised “sheer mathematical impossibilities” in the election results supporting the claims.

“Especially egregious conduct arose in Forsyth, Paulding, Cherokee, Hall, and Barrow County,” the complaint reads. “This scheme and artifice to defraud affected tens of thousands of votes in Georgia alone and ‘rigged’ the election in Georgia for Joe Biden.”

In particular, the suit took issue with election software and hardware from Dominion, which it noted was recently purchased and “rushed into use” by Kemp, Raffensperger, and the Georgia Board of Elections.

Plaintiffs allege that the design and features of the Dominion software don’t allow for a simple audit to see whether votes were misallocated, redistributed, or deleted, pointing to a Jan. 24 decision by the Texas secretary of state to deny certifying the software “because of a lack of evidence of efficiency and accuracy and to be safe from fraud and unauthorized manipulation.”

“First, the system’s central accumulator does not include a protected real-time audit log that maintains the date and time stamps of all significant election events. Key components of the system utilize unprotected logs,” the filing reads. “Essentially, this allows an unauthorized user the opportunity to arbitrarily add, modify, or remove log entries, causing the machine to log election events that do not reflect actual voting tabulations—or more specifically, do not reflect the actual votes of or the will of the people.”

The suit also alleges “incontrovertible physical evidence that the standards of physical security of the voting machines and the software were breached, and machines were connected to the Internet in violation of professional standards and state and federal laws.”

Part of the suit mentions a delay in voting at State Farm Arena in Fulton County, where video on Nov. 3 shows that election workers “falsely claimed a water leak required the facility to close.” It adds: “All poll workers and challengers were evacuated for several hours at about 10:00 PM. However, several election workers remained unsupervised and unchallenged working at the computers for the voting tabulation machines until after 1:00 AM.”

Another part of the complaint says that cybersecurity expert Navid Keshavarz-Nia testified that “U.S. intelligence services had developed tools to infiltrate foreign voting systems including Dominion.” Pointing to vulnerabilities in the Dominion’s software, he claims that “hundreds of thousands of votes” were transferred to Democratic presidential nominee Joe Biden from President Donald Trump in battleground states.

The complaint also cites a former electronic intelligence analyst under the 305th Military Intelligence Battalion, who declared that the Dominion software was accessed by agents acting on behalf of China and Iran to monitor and manipulate elections, including the 2020 U.S. general election.

A former U.S. military intelligence expert, who analyzed the Dominion software system, concluded that the system and software “were certainly compromised by rogue actors, such as Iran and China,” according to another part of the complaint.

“By using servers and employees connected with rogue actors and hostile foreign influences combined with numerous easily discoverable leaked credentials, Dominion neglectfully allowed foreign adversaries to access data and intentionally provided access to their infrastructure in order to monitor and manipulate elections, including the most recent one in 2020,” the filing says.

The lawsuit also claims: “Georgia’s election officials and poll workers exacerbated and helped, whether knowingly or unknowingly, the Dominion system carry out massive voter manipulation by refusing to observe statutory safeguards for absentee ballots. Election officials failed to verify signatures and check security envelopes. They barred challengers from observing the count, which also facilitated the fraud.”

The Georgia secretary of state and Dominion Voting Systems didn’t immediately respond to requests by The Epoch Times for comment on the suit.

Election results were certified by Georgia on Nov. 20. At the time, Kemp didn’t clearly endorse the results but said the law required him to “formalize the certification, which paves the way for the Trump campaign to pursue other legal options and a separate recount if they choose.”

2 thoughts on “Kraken – Will Courts Look at OR Succumb to Crime?”