If Americans actually elect the perpetuation of Obama/Crooked Hillary/Biden corrupt government on November 3, 2020; those Americans deserve the despotism that will be in their future! Trump should win if sane voters outnumber the insane. Pending a Trump reelection, FBI Director Christopher Wray should be fired. It is becoming more and more apparent that Wray is as crooked a cop as his predecessor James Comey. Comey crimes are still being covered up by Wray. WHY? It smells of swamp stench to me.

Here is a Gateway Pundit and a video from Tracy Beanz (H/T uncoverdc.com) on FBI corruption – and NO WRAY CLEANUP! 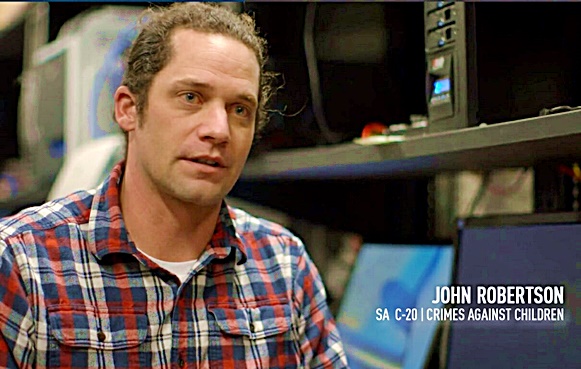 John Robertson, was an FBI Agent who investigated crimes against children.  This is how he stumbled upon Hillary Clinton’s emails.

We first reported on Robertson in August of 2018 when the mainstream media was focused on the Trump Russia Mueller sham investigation.

John was assigned to the Anthony Weiner case, a top Democrat married to Hillary Clinton adviser Huma Abedin. During his investigation of Weiner’s computer John discovered thousands of Hillary Clinton emails and blew the whistle on the Comey-McCabe and Strzok cover-up of evidence.

“The crickets I was hearing was really making me uncomfortable because something was going to come down,” Robertson said he later told Justice Department investigators. “Why isn’t anybody here? Like if I’m the supervisor of any [counterintelligence] squad … and I hear about this, I’m getting on with headquarters and saying, ‘Hey, some agent working child porn here may have [Hillary Clinton] emails. Get your ass on the phone, call [the case agent], and get a copy of that drive,’ because that’s how it should be. And that nobody reached out to me within, like, that night, I still to this day don’t understand what the hell went wrong.” Robertson wrote a “Letter to Self” in late October after an Oct. 19, 2016, meeting, during which he implored Assistant U.S. Attorney Amanda Kramer of the Southern District of New York to push FBI leadership to look at the thousands of emails he had unearthed.

“I have very deep misgivings about the institutional response of the FBI to the congressional investigation into the Hillary Clinton email matter … Put simply: I don’t believe the handling of the material I have by the FBI is ethically or morally right. But my lawyer’s advice — that I simply put my SSA on notice should cover me — is that I have completed CYA [Cover Your Ass], and I have done so,” Robertson wrote. “Further, I was told by [Kramer] that should I ‘whistleblow,’ I will be prosecuted.”

Robertson continued: “I possess — the FBI possesses — 20 times more emails than Comey testified to. … While Comey did not know at the time about what I have, people in the FBI do now, and as far as I know, we are being silent. … If I say or do nothing more, I am falling short ethically and morally. And later, I may be accused of being a Hillary Clinton hack because of the timing of all this. … But if I say something (i.e., whistleblow), I will lose my reputation, my career, and risk prosecution. I will also be accused of being a Donald Trump hack.”

The only advice from his bosses was to erase his office computer, which meant leaving no record of his investigations, a new book says.

‘October Surprise’: New details emerge about FBI delay on Weiner laptop in 2016 https://t.co/gEsF3B7YzI
Many of these emails likely dealt with @ClintonFdn "entities" and/or Teneo and/or principals, clients. DOPEY, CROOKED @Comey belongs in JAIL, with MANY others @csthetruth

Others believe that what was found on the Weiner laptop was shocking, we reported on this in August 2018 as well.  In late 2016 shortly before the 2016 election on November 4th, 2016, Erik Prince, founder of Blackwater, was on Breitbart radio and he said shocking things about Weiner’s emails –

“Because of Weinergate and the sexting scandal, the NYPD started investigating it. Through a subpoena, through a warrant, they searched his laptop, and sure enough, found those 650,000 emails. They found way more stuff than just more information pertaining to the inappropriate sexting the guy was doing,” Prince claimed.

“The amount of garbage that they found in these emails, of criminal activity by Hillary, by her immediate circle, and even by other Democratic members of Congress was so disgusting they gave it to the FBI, and they said, ‘We’re going to go public with this if you don’t reopen the investigation and you don’t do the right thing with timely indictments,’” Prince explained.

“I believe – I know, and this is from a very well-placed source of mine at 1PP, One Police Plaza in New York – the NYPD wanted to do a press conference announcing the warrants and the additional arrests they were making in this investigation, and they’ve gotten huge pushback, to the point of coercion, from the Justice Department, with the Justice Department threatening to charge someone that had been unrelated in the accidental heart attack death of Eric Garner almost two years ago. That’s the level of pushback the Obama Justice Department is doing against actually seeking justice in the email and other related criminal matters,” Prince said.

Prince shared that the NYPD kept a copy of all the emails on Weiner’s computer, and the following –

Prince agreed, but said, “If people are willing to bend or break the law and don’t really care about the Constitution or due process – if you’re willing to use Stalinist tactics against someone – who knows what level of pressure” could be brought to bear against even the most tenacious law enforcement officials?

We still don’t know what happened to the Weiner emails.  We now know that Robertson did a CYA to protect himself.  The American people deserve to know what was on the laptop and in those emails.

Joe Hoft is the twin brother of TGP’s founder, Jim Hoft. His posts have been retweeted by President Trump and have made the headlines at the Drudge Report. Joe worked as a corporate executive in Hong Kong and traveled the world for his work, which gives him a unique perspective of US and global current events. He has ten degrees or designations and is the author of three books. His new book: ‘In God We Trust: Not in Lying Liberal Lunatics’ is out now – please take a look and buy a copy.

One thought on “FBI Still Corrupt? What’s Up Wray?”