I am on the MassResistance email list. I love MassResistance because the organization stands for traditional Christian values. MR activism typically exposes the dark nature ungodly homosexuality on American culture. More recently MR has been exposing LGBTQ promotion of Drag Queen story hours to children in American Public Libraries. 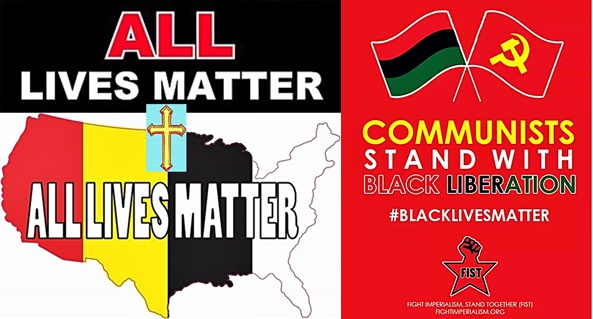 I am quite pleased that MassResistance has started to expose the Marxist nature of the Black Lives Matter movement to destroy the nuclear family to restructure society more than actually care about lives of Black Americans. MR has begun actual peaceful protests in cities across America highlighting ALL LIVES MATTER and in support of Police who are tasked to protect ALL LIVES unless hamstrung by Dem-Marxist local, State and National leaders. Below are the highlights of a MR rally in Chula Vista, CA on July 31.

Unlike many other conservative groups, we’re NOT afraid to tell it like it is.

This needs to be happening everywhere!

[Blog Editor: I could not find an embed on the webpage. MR has a Youtube Page, but this particular video as of today has not been uploaded. I did find the video on the MR Bitchute page which I am embedding below.]

Bitchute VIDEO: MassResistance tells the truth at its pro-police rally!

On July 31, 2020, MassResistance held a pro-police rally outside the Chula Vista, CA police station. Unlike other pro-family groups, we didn’t hold back about the dangers of Black Lives Matter to the police, black people, and all of society!]

Across the country, many pro-family people have been holding pro-police rallies to support their local police officers. These are in response to the vicious attacks on police and calls to de-fund police departments by the Black Lives Matter (BLM) movement.

But unfortunately, the organizers of most of the pro-police rallies are scrupulous to avoid criticizing BLM or even saying “All Lives Matter” – lest they offend anyone. But that kind of fearfulness only makes things worse.

MassResistance believes that local pro-family people should be at the forefront of warning and educating the rest of the community – and confronting all the BLM lies and anti-family poison with truth! As many have documented, BLM is an admitted Marxist-based group that uses civil rights as a front to push an extreme anti-American, anti-family agenda. Conservatives must not be afraid to say that. So when we organize local pro-police rallies, we don’t pull any punches! And we can tell that the police appreciate that. 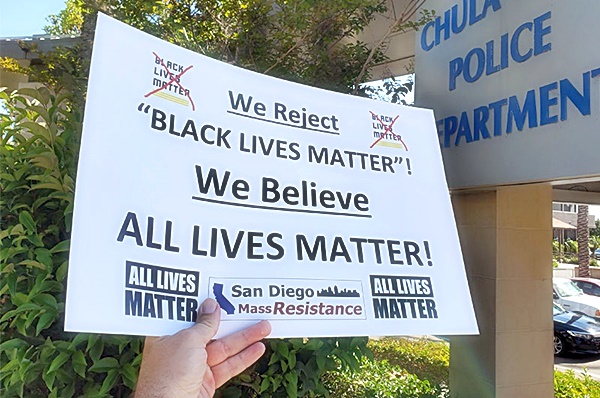 Our reaction to BLM!

One of our recent rallies was held on July 31 in Chula Vista, CA (a suburb of San Diego). We have a great MassResistance chapter there! Over the past year they have confronted the “Drag Queen Story Hour” that targets young children, and even forced the city to take down the “rainbow flag” from the City Hall flagpole.

We held a rally right in front of the Chula Vista Police Department – to let the police know that the community supports them and that we will confront the destructive BLM agenda that’s targeting them.

Our MassResistance activists are not afraid to tell the truth … 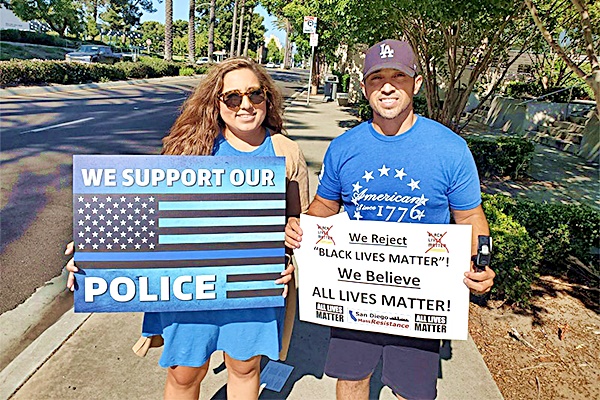 … and support the police!

Out on the street in front of the rally area.

The response we got from both the police and the community was incredibly supportive! We’ll be reporting on similar rallies we do in Southern California – and beyond.

Please help us continue to do our uncompromising work!

Your support will make the difference!

A leading pro-family activist organization, MassResistance provides the information and guidance people need to confront assaults on the traditional family, school children, and the moral foundation of society. Based in Massachusetts, we have supporters and activists in all 50 states, Puerto Rico, and several foreign countries.

Our group was founded in 1995 as Parents’ Rights Coalition. Under the name Article 8 Alliance during the “gay marriage” crisis in Massachusetts, we worked to have the Mass. Supreme Court ruling voided and to stop Gov. Romney from implementing the unconstitutional ruling. We adopted the name MassResistance in 2006 when our role as the true resistance to tyrannical government became clear. (See our 2017 article at American Thinker, “On the Meaning of “Resistance”.)

Since we were in the first state to see homosexual activism in the schools and “gay marriage,” we thoroughly understood the threat of sexual radicalism, curtailed freedom of speech, uneven application of the law, judicial activism, and post-constitutional government.