America’s media has failed Americans portraying looting, rioting and property damage as a legitimate response to a few bad policeman killing George Floyd. My guess is most Americans are not even thinking of Mr. Floyd thanks to the race baiting of the Dem Party enabling Black Lives Matter and Antifa to impose their Communist will on American lives and property increasingly resulting in mob violence.

My guess is a Civil War is coming especially as the victimized Americans begin arming themselves to protect themselves from the mobs because local Dem controlled governments restrain their police enforcement of the law. You will thus be interested in these observations by Justin Smith. (Bold text in Justin’s submission indicates my emphasized agreement.)

In the Absence of Law and Order

The entire nation has watched over the past weeks in horrified disgust, as anti-American communist thugs deface, vandalize and topple our statues and monuments, with the latest case, in Baltimore, Maryland, being red paint thrown on the statue of George Washington. Previously, a statue of Washington was also toppled in Portland, Oregon. And now, we have just recently seen rioters in San Francisco even topple the statue of Union General Ulysses S. Grant and deface and attempt to tear down the statue of Andrew Jackson, in Lafayette Square near the White House [and other] malicious acts that are too often accompanied by the burning of the American Flag. 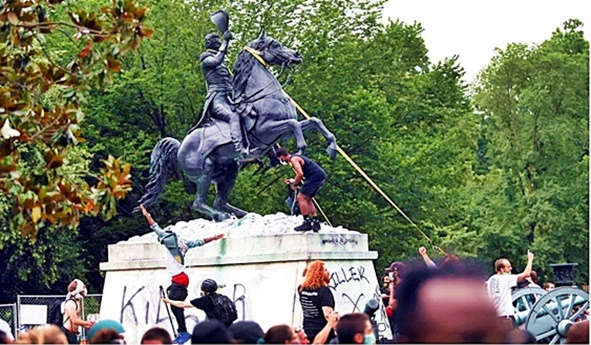 This situation disgusts and angers me to the point that I have a massive resentment towards those cowards in our government, who have stood by idly, wringing their pale little collective hands, and chanting the mantra of the day, “Oh my, oh me … what should I do, what can I do?” as though they’ve never been capable of having a cogent thought or making a decision by themselves and on their own. We are dying from a lack of strong, independent, conservative-minded men and women if positions of government that matter most.

If radicals have the right to use force and violence to tear down these monuments and statues and circumvent due process and the rule of law, by that same token and example, so too do the patriots of America have the right to stand with arms in hand and prevent such from taking place.

In the absence of law and order and the sufficient authorities capable of enforcing the same, a void is created that demands to be filled. Either the thugs fill it with more chaos and mayhem or the Good Americans fill it and restore order. And, should these radicals persist in tearing down every last vestige of everything good, decent and true within our culture and our American heritage, all America may soon bear witness to the void being filled with the dead carcasses of the thugs and the Antifa and BLM communist radicals of this nation, who are doing all they can to destroy the republic and “fundamentally transform America” into an authoritarian, probably totalitarian, socialist regime, using any means necessary, including violence.

It’s time to end their Marxist pipe-dream right here and right now, and cut it all the way back to the roots of its leadership, however that is to be accomplished. These Amerikkans need to be charged with sedition, treason and domestic terrorism, prosecuted and jailed according to the depth of their complicity in the movement that has succeeded in destroying so much of America and damaging the credibility of the United States government and all states’ government on multiple levels.

An alternative viable solution might be found in giving all who may eventually come under criminal investigation over roles in the riots the choice of spending the rest of their lives in exile or ten years to life in prison.

Unfortunately, America may find it necessary to resort to a hardcore military maxim, that has become more dear to me the more I see the communist anti-American tugs of Antifa and BLM advancing across America, laying waste to towns and cities at will. We had a saying in the Army in my time, that was simply “Kill ‘Em All and Let God Sort ‘Em Out”.

I believe America is headed into a civil war that will be more prolonged, intense, heated and bloody than the first one, due to the fact that it won’t be like the 1860s with two clear sides.

A close friend of mine, Christine Holm, a singer-songwriter from Illinois, a Christian and a pretty wise lady, recently wrote me, and here is part of that communication:

“Many have already served and sacrificed for this country. None of us ever really want war or to have to fight or face the loss of life or to take those risks but we will do it because we base it upon the strongest motivation mankind can have….LOVE. ….. True patriots will always be willing to fight and die for goodness and for truth because that’s the RIGHT THING TO DO. Even if we were outnumbered…(but we won’t be)….we would still consider it our duty and our privilege and honor to stand against evil.”

We will see the worst infighting in the inner-city areas where it will be near impossible to tell if a man of any particular color is a conservative or a Marxist/Maoist or simply trying not to take sides and let it all pass him by. But sides will eventually emerge through intelligence gathering that will pit localities and communities against each other, perhaps even states, and result in the splintering, the Balkanization, of our country, for quite some time into the future, until such time some unifying event comes forth to bring us all back under the same banner, hopefully the banner of America and the American Flag, or the banner of God.

And as I wrote those last words, an image of Joan D’Arc [Joan of Arc for my fellow Americans lacking French] flashed across my mind, the slip of a girl who united all of France, if for but a brief moment in history. 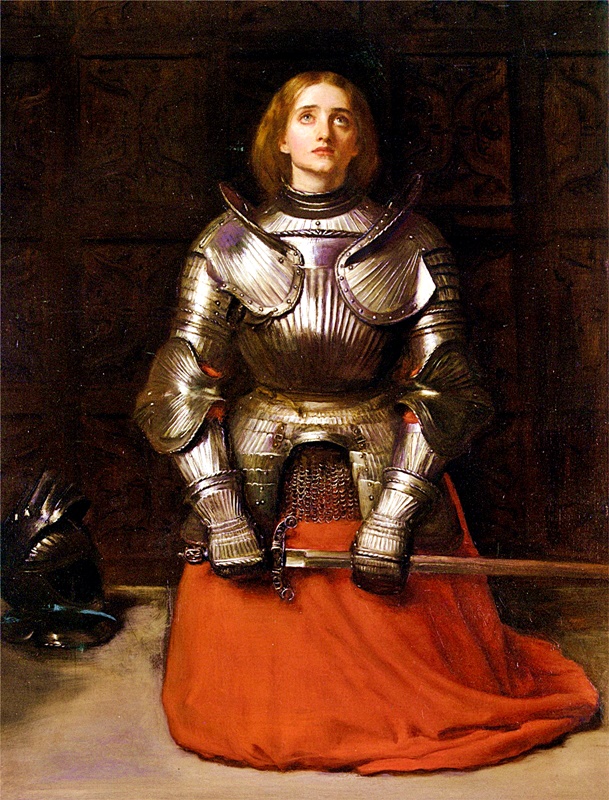 Joan of Arc praying before a battle

America is crying out for such a figure now, but they thought they had that figure in President Trump.

No one person will be the salvation of this nation. America’s salvation can only be achieved, when the nation on the whole returns to the fold of God and the principles He set forth, upon which this nation was founded. It will take all of America forming a common bond again under God to turn back the hand of time and deliver us to a new age for the future, whereby our freedom and liberty truly are preserved, protected and defended.

Such an endeavor is a mighty task — but not an impossible task. Through God all things are possible.

Only time can tell how this really ends. I’ll just keep praying and hoping and working towards the best of outcomes.

Text embraced by brackets and embedded links are by the Editor.

One thought on “In the Absence of Law and Order”