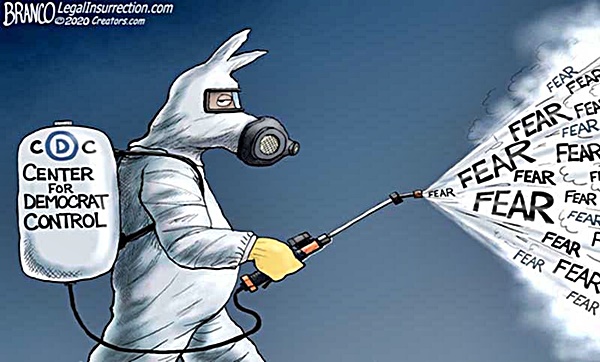 I actually saw the title “Is this a PANDEMIC or a DEMPANIC?” at other website locations a day or two ago. I just don’t recall where without doing a search. But since it has popped into inbox today, perhaps a Higher Power is telling me to share. So I will. Especially in light the Dems have been caught more interested in fundamentally transforming America into a Leftist culture than about actual Americans – HERE and HERE.

Is this a PANDEMIC or a DEMPANIC?

Now that we’re in a de facto martial law mode – a shutdown of entire industries and small businesses, nighttime curfews, social isolation, a run on goods, huge sports events cancelled, a “shelter-in-place” mandate in California, releasing prisoners in New York (God forbid these miscreants get a flu!), Broadway gone dark, and a craven media inciting and delighting in the panic they’re causing, it is relevant to ask:

Of course, neither one of these Big Government hacks would be capable of such a feat. Thank God for the cool, calm, collected, and seasoned business mogul, President Donald J. Trump, who is guiding us through the coronavirus scare with decisive action and great success – with no less than 56 bold initiatives – and who not only brought us the greatest economy and employment record in the 243-year history of our country, but will revive it when this virus scare passes into history – shortly, I predict!

WHERE ARE WE NOW?

Not PAN-DEMIC — IT’S A DEM-PANIC

All praise to the brilliant graphic artist (above) who captured so perfectly what we are witnessing today – the last-gasp efforts of:

These are just a few of the forces who have been working overtime for the past four years to sabotage, undermine, and ultimately destroy both candidate and then President Trump, the man who single-handedly exposed:

And yet, with all their impressive advanced college degrees, fancy credentials, exalted titles, tenure-for-life government jobs, social-media collaboration with leftist Google, YouTube, Facebook, Twitter, and Instagram, and the flagrant abuse-of-power they’ve gotten away with – but not for long! – such as illegal FISA warrants, lying witnesses, shadow-banning, rigging elections, the list goes on…they still could not bring down THE. SMARTEST. GUY.IN.THE.ROOM.

TEARING THEIR HAIR OUT

Now, almost eight months from a presidential election, all of these forces are desperate, anguished, just-about suicidal with frustration. What can we do, they are asking themselves, to stop President Trump from winning a second term and then crushing for all time the remaining malignant remnants of the leftist agenda?

While none of them are smart enough to have created the coronavirus threat, they secretly celebrated the fact that this crisis would prevent the president from conducting his two or three rallies a week around the country, where upwards of 50,000-75,000 people line up for days on end to applaud and support their president.

Well, they got their wish. Now he is on TV every single day, showing the entire country (and world) what genuinely strong and effective leadership is all about – which is why his approval ratings are skyrocketing!

Undaunted, the frantic left is spending untold billions, not to help the deserving people affected adversely by the coronavirus, but, as Daniel Greenfield documents exhaustively, “to smear President Trump and undermine the administration. How patriotic of them.”

Greenfield cites the SuperPac that leftist billionaires – Hollywood producer Jeffrey Katzenberg, financier George Soros, the list is long – are using to attack President Trump over the coronavirus. Many if not all of them are more successful and savvy than most people in the world – but I repeat, none of them a match for THE. SMARTEST. GUY.IN.THE.ROOM!

WHERE ELSE THE OPPOSITION COMES FROM

Three years ago, I wrote an article called “The Hate-America Death Squads” in which I described the forces we are witnessing today, all of whom exult when America has trouble.

DEATH SQUAD #1 is the Cloward-Piven Strategy, begun in 1966 and flourishing to this day. In short, the founders of this plan, from Columbia University, loathed America and insisted that capitalism could be collapsed by overloading the government with financial demands that could not be met. They also formed voter-fraud schemes like Project Vote, ACORN, etc, still extant only with different names. And surprise, surprise – ACORN’s lawyer was none other than Barack Obama. Birds of a feather, and all that.

DEATH SQUAD #2 is radical disciples of Saul Alinsky, a community organizer from Chicago who wrote the bible for hate-America leftists: Rules for Radicals. Hillary Clinton wrote her Wellesley thesis about Alinsky and remained close friends with him years after she graduated, and Barack Obama became a community organizer in the Alinsky mode. Both of them shared Alinsky’s real goal – to destroy capitalist America and turn it into the socialist-cum-communist regime they preferred.

DEATH SQUAD #3 is and was the leftwing media – or what Dr. Drew Pinsky calls “the corrupt, uninformed, morally reprehensible American press” – notorious for skewing the “news” in a Marxist direction. Remember, most media anchors and news readers take their marching orders directly from bosses who are extremely invested in the global economy and not in President Trump’s economy, which has brought millions of jobs and manufacturing and profits back to the United States in order to Make America Great Again and Keep America Great!

DEATH SQUAD #4 is the Muslim Brotherhood, which seeks the downfall of America, a phenomenon writer Linda Goudsmit explains in explicit and exquisite detail: “Islam is an expansionist socio-political movement with a religious wing created 1400 years ago.” Then and now, Islam “seeks world dominion – the establishment of a worldwide Islamic caliphate ruled by Islamic sharia law,” which is incompatible and anathema to American law and the U.S. Constitution.

DEATH SQUAD #5 is comprised of left-wing billionaires, mentioned above, who fund the hate-America groups like Occupy Wall St., Antifa, et al., as well as the politicians who have brought us Sanctuary Cities, no-bail laws, and attempts to rob Americans of their First Amendment right of Free Speech, Second Amendment right to bear arms, the power of capitalism to lift all boats, and belief in God.

Thankfully, there is reason to believe things are looking up in the battle against coronavirus. Among hopeful developments –

Here is a good way to track the progress of the coronavirus.

Here is an important video on the origins of the Chinese coronavirus. [Blog Editor: Interestingly this 3/6/20 posted video is from Left-Wing Vox. Ergo those is no mention of a bioweapon conspiracy BUT also interestingly, Vox fingers “Wuhan” China wet market specifically mentioning bats. So Vox fingered Wuhan China before the rest of the Left said it was racist to do so.]

Joan Swirsky is a New York-based journalist and author. Her website is www.joanswirsky.com and she can be reached at joanswirsky@gmail.com.

The Coronavirus Panic seems to have affected giving on this blog. I am on a disability but my wife has done quite well on a sales job and a Network Marketing healthy coffee (healthy as in I’ve lost 82 lbs. in a year) business that also provides vitamin-mineral-anti-oxidant supplements that might be beneficial for your family. I’d love to share the coffee business corporate name, but if you know anything about Network Marketing companies, they get a bit cranky about that practice in their policies and procedures. Suffice it too say my wife’s Network Marketing business provides FREE websites for online marketing. In my wife’s case she has bought several Domain Names linked to her website. My darling wife has told me the company has waved the sign-up fee for buyers during the pandemic crisis. You can access Diana Houk’s coffee network via this domain name: http://www.skinnyoptimumcoffee.com/.

Addressing my revenue issue. Among the many medical I’m overcoming I am only sharing one medical bill issue. I use a CPAP machine/mask in my sleeping hours. I need 10 people to donate $5.00 to my PayPal account to help pay a CPAP supply bill. It is my opinion this Pandemic is temporary and when over, our family revenue issue will self-correct. Until then please consider a one time donation using this NCCR PayPal embedded link.

RenewAmerica is a grassroots organization that supports the self-evident truths found in the Declaration of Independence, and their faithful application through upholding the U.S. Constitution, as written. Its purpose is to thoughtfully and courageously advance the cause of our nation’s Founders.

The organization is for ALL people who consider themselves loyal Americans. It has no philosophy, image, or agenda beyond this one unifying premise: America must return to its founding principles if it is to survive.

RenewAmerica is thus nonpartisan and nondenominational.

Because RenewAmerica is GRASSROOTS at heart, it remains fundamentally independent, creative, and energetic in pursuing its distinctive agenda in the cause of strengthening America. We welcome your creative energy in this vital cause.

Please join with us. We need your strength.

The mission of RenewAmerica is to expand the influence of America’s grassroots — both among individual citizens and among principled groups — in the cause of preserving our nation upon its founding ideals, specifically those in the Declaration of Independence and U.S. Constitution, as well as those derived from biblical principles.

To achieve our mission, we intend to fully utilize RenewAmerica as an alternative media source, as well as foster an ever-growing network of dedicated grassroots citizens who share the vision of RenewAmerica.

We intend to succeed in this ambitious undertaking.

RenewAmerica began in January 2002 as … READ THE REST

One thought on “Is this a PANDEMIC or a DEMPANIC?”