Regardless if you have the opinion that Rick Joyner’s (Joyner bios: Believers Portal & Wikipedia) theology is way out there or right on, the insights I just read on Church/State separation are spot on. Pay particular attention to the facts that various State Constitutions incorporated on religion that were repealed but NOT struck down by SCOTUS to demonstrate the Original Intent of America’s Founders. IT IS NOT THE LIVING CONSTITUTION crap America’s Left (Dem-Marxists) are trying to brainwash you to believe.

Living Constitution Implies Tyranny of Majority or the Few 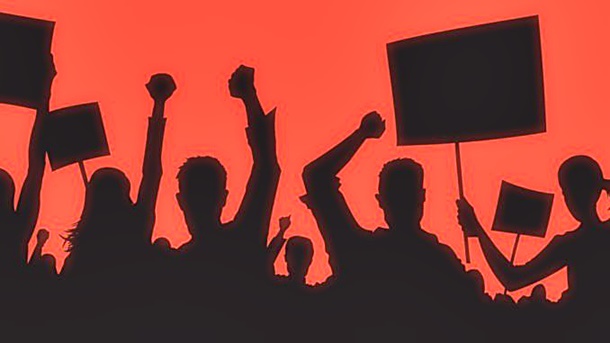 Word of the Week

Following up on the fact that nowhere in The United States Constitution does it state that there must be a separation between the church and the state, it only states that “Congress shall make no law respecting an establishment of religion, or prohibiting the free exercise thereof.” Because Congress was the Federal Government, this did not prohibit the states from establishing a recognized religion if they chose to, and many of them did.

For example, a couple of states made it a requirement to be of the Protestant faith to vote. Others required church attendance to vote. This did not make these laws right, and eventually they were all repealed, but that this was allowed proved that the states had authority to do such things under The Constitution. The Constitution only forbade Congress from establishing religion.

These religious test laws by some states were legal under The Constitution, but they were not right, and they did cause problems. The wisdom of how these matters could be worked out by the states while the whole country was not subjected to the turmoil they caused proved to be genius.

Concerning the proper and constitutional relationship between the church and the state, we have all likely witnessed men and women who were good friends ruin that friendship by getting married. It is a worthy goal for those who are married to be friends, but the love for each as friends may not work well in the more committed bonds of marriage. This is why many languages have different words for these two types of affection—friendship and romantic love. The point is that the church and the state should have a relationship as friends, but not marriage.

When the relationship between church and state went beyond what it is supposed to be, it brought upon the earth the darkest of times—the Dark Ages. The abuses of the wrongful union of the church to the state was deeply impressed on the early Americans. Many had been witnesses to, or victims of, the horrible corruption that came from this wrongful union of the church and state in Europe, which culminated in the worst persecution in human history—The Inquisition.

The Inquisition was the persecution by Christians of other Christians and Jews. It was only possible by the institutional church being married to the state at that time. Christians and Jews who would not conform to the dogma of the institutional church of the time were slaughtered on an incomprehensible scale. Halley’s Bible Handbook estimates that up to 50 million of these non-conformist Christians and Jews were tortured and killed in The Inquisition. This number is corroborated by other historians. We can read in such works as Foxe’s Book of Martyrs the kind of demented and diabolical tortures used by The Inquisition. This was truly one of mankind’s darkest hours, and done in the name of Christ by the harlot church that had wrongfully married the state.

With many of the first colonists being victims of this persecution—and the leaders of the independence movement in America knowing their stories well—when The British imposed a law on the colonies that no minister of the gospel could be licensed except through The Church of England, it was intolerable to the colonists.

The Founders of the American Republic were resolute in ensuring that such a thing would never happen in America. To do this they established the government first and foremost on the freedom of religion, resolving to keep the Federal Government out of religion, but a protector of religious freedom.

As the Jews of Europe were persecuted along with the Protestants and other Christian movements, they also fled to America to escape. They were both welcomed and honored by their Christian fellow colonists. Those of other religions, or no religion, also found in America the tolerance and freedom they had not found anywhere else in the world. America was born as a haven for religiously persecuted people.

The American Founders were resolved to keep the church and state as separate entities, but it was clearly to keep the state out of the church’s business, not the other way around. We must then ask, how did The Supreme Court and many lower courts issue so many decisions prohibiting the free exercise of religion?  By blatantly violating The Constitution and The First Amendment. The leadership of Congress was too weak or inept to confront this tyrannical abuse by the judiciary.

If our Republic is to be preserved, we must recover the fact that The Supreme Court is not the “supreme law of the land”—The Constitution is. The Supreme Court has made many unconstitutional decisions in its history, some of which were reversed by later courts, but many have not. In recent times it is piling them up almost yearly because it has now departed so far from the lane The Constitution gave to the judiciary. If this is not corrected, it will soon cause the destruction of the Republic, just as Jefferson and other Founders warned.

I believe there are more instances of the abridgment of the freedom of the people by gradual and silent encroachments of those in power, than by violent and sudden usurpations.

– James Madison, author of The Constitution and fifth President of the United States

We the People of the United States, in order to form a more perfect union, establish justice, ensure domestic tranquility, provide for the common defense, promote the general welfare, and secure the blessings of liberty to ourselves and our posterity, do ordain and establish this Constitution for the United States of America.

–Preamble to the United States Constitution

An Intro to ‘A Clear Vision’