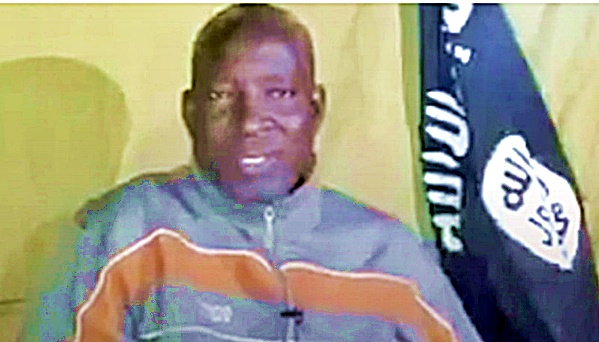 I stumbled upon an ACLJ email dated 2/1/20 that submitted a number of petitions to sign to forward the cause of Christian faith in legal matters. The petition that caught my eye was a condemnation of Islamic terrorists Boko Haram executing Pastor Lawan Andimi by beheading. WHY? For the Islamic crime of not bowing to Islamic Supremacy.

This is the classic example of the reason I will NEVER trust an adherent of Islam.

In full disclosure, ACLJ sends out these petitions largely as a device of donation revenue. The ACLJ is a worthy cause. In my case, I signed the petition to voice my disapproval of Islamic persecution of Christians but did not donate money. You do as your conscience and human spirit leads you.

2020 is already proving to be a deadly year for innocent Christians in Nigeria.

Boko Haram – the Nigerian jihadist militia pledged to ISIS – just beheaded a Christian Pastor who weeks ago was shown in a hostage video telling the world: “Don’t cry. Don’t worry. But thank God for everything.”

As reported in the New York Times, Pastor Lawan Andimi was executed by Boko Haram and his hometown attacked:

Islamic militants in Nigeria have killed a Christian pastor who had pleaded for his life in a video just days earlier, and a human rights activist said Tuesday that other extremists attacked his hometown on the same day.

The Rev. Lawan Andimi was abducted earlier this month when Boko Haram militants attacked the Michika local government area, where he was the chairman of a local chapter of the Christian Association of Nigeria. He was killed on Monday.

Anyone who has seen the video knows that Rev. Andimi did not plead for his life. In fact, he was calm, and even appeared to be at peace, trusting in God and stating:

By the grace of God, I will be together with my wife, my children, and my colleagues. [But] if the opportunity has not been granted, maybe it is the will of God . . . I have never been discouraged because all conditions that one finds himself in is in the hands of God.

The unshakable faith of this pastor should be humbling to every Christian. The fact that he was executed by Islamic radicals because of his faith should infuriate every human being.

[Muslim Fulani] herdsmen on motorbikes rode into Gora-Gan village in Zango Kataf County at about 5 p.m. shooting villagers on sight, according to a local resident. Luka Biniyat, spokesman for the Southern Kaduna Peoples Union (SOKAPU), confirmed the killing of Briget Philip, 18, and Priscilla David, 19.

Other young Christians were injured in the attack, including a 12-year-old.

The evil of these jihadists seems to know no limit. According to the New York Times, the Islamic State has even used or forced children to execute Christians:

On Friday, the Islamic State’s West Africa Province, known as ISWAP, released a video which showed a hooded child with pistol in hand execute a Christian man.

I am greatly saddened by the fact that the terrorists went on to kill him even while giving signals of a willingness to set him free by releasing him to third parties. This barbarism is condemnable. We will ensure that these terrorists pay a heavy price for their evil actions. — Muhammadu Buhari (@MBuhari) January 21, 2020

However in every instance of violence, the Nigerian government has seemed unable or worse, unwilling to do anything about it. The body count continues to rise, and Christians live in constant fear.

This deadly injustice has to stop. Nigerian Islamic terrorists are waging a horrific campaign of mass atrocities against people in their own country simply because they are Christians. And those they don’t kill they take hostage and even enslave.

We’ve gone to the United Nations through our European office, the European Centre for Law and Justice (ECLJ), demanding international intervention for Christian teen Leah Sharibu, one of over 100 schoolgirls kidnapped by Boko Haram at gunpoint almost two years ago.

Boko Haram is holding the innocent young Christian prisoner because she refuses to convert to Islam. The sinister group threatened to kill or enslave her. Until recently, we weren’t even sure if Leah was still alive. Thankfully the Nigerian government  confirmed that she is, but she still desperately needs help.

We submitted a written submission to the U.N. Human Rights Council warning that the violence is boiling over into other regions, and asking for immediate action to stop the bloodshed and persecution before it’s too late:

It is imperative that the U.N. take swift action and work with the government of Nigeria to ensure that Leah and all others who remain captured are returned home safely and to put an end to the atrocities being carried out in Nigeria by Boko Haram and the Fulani Herdsmen. No one should have to live under the fear of being abducted, enslaved, or killed.

If nothing is done to stop these violent radicals and hold them accountable for their atrocities, the outlook for Christians in Nigeria, and across Africa, looks bleak. We cannot let these Islamic militias hunt Christians into extinction.

As we stated in our submission:

The U.N. Charter calls on the U.N. to remove threats to peace, and the Genocide Convention calls on the U.N. to prevent acts of genocide, not merely to respond to them. We have seen in Iraq and Syria what happens when the U.N. fails to take preventive measures when it is clear that mass atrocities are being carried out against a particular group of people. This is only the beginning, if meaningful action is not taken now the problem in Nigeria will worsen.

We ask every ACLJ member to pray for the family of Pastor Lawan, and for Leah Sharibu, that she is finally liberated from her evil captors, as well as for her family as they endure this nightmare.

We have a moral obligation to fight for our Christian brothers and sisters. All Christians have a right to live and worship in peace. We will continue to work at the U.N. and with world leaders until the violence is not only stopped, but action is taken to bring the extremist perpetrators to justice and prevent the bloodshed from ever happening again.

The ACLJ is an organization dedicated to the defense of constitutional liberties secured by law.

American Center for Law and Justice is a d/b/a for Christian Advocates Serving Evangelism, Inc., a tax-exempt, not-for-profit, religious corporation as defined under Section 501(c)(3) of the Internal Revenue Code, specifically dedicated to the ideal that religious freedom and freedom of speech are inalienable, God-given rights. The Center’s purpose is to engage legal, legislative and cultural issues by implementing an effective strategy of advocacy, education and litigation to ensure that those rights are protected under the law. The organization has participated in numerous cases before the Supreme Court, Federal Court of Appeals, Federal District Courts, and various state courts regarding freedom of religion and freedom of speech. Your gift is very much appreciated and fully deductible as a charitable contribution. A copy of our latest financial report may be obtained by writing to us at P.O. Box 90555, Washington, DC 20090-0555.