OR just buy some healthy coffee. 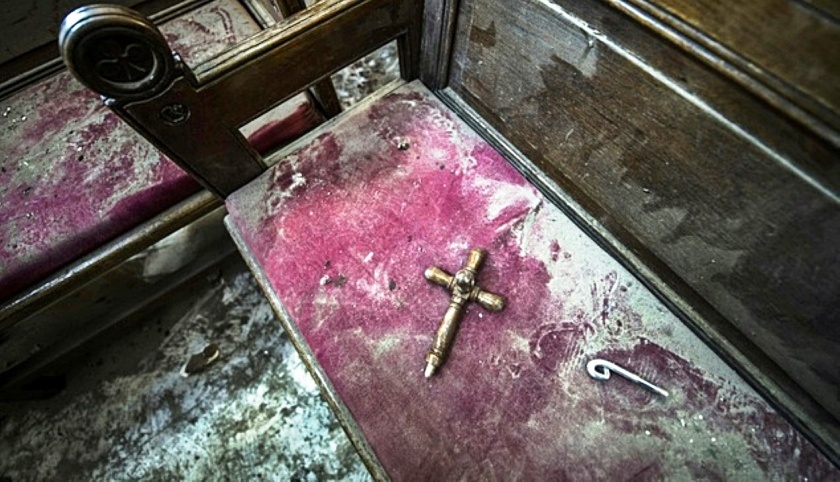 The United Nations Refugee Agency appears to be committed to blocking persecuted Christians from receiving any assistance.  According to a recent CBN News report:

Christian Syrian refugees … have been blocked from getting help from the United Nations Refugee Agency, the UNHCR, by Muslim UN officials in Jordan.

One of the refugees, Hasan, a Syrian convert to Christianity, told us in a phone call that Muslim UN camp officials “knew that we were Muslims and became Christians and they dealt with us with persecution and mockery. They didn’t let us into the office. They ignored our request.”

Hasan and his family are now in hiding, afraid that they will be arrested by Jordanian police, or even killed. Converting to Christianity is a serious crime in Jordan.

According to Timothy, a Jordanian Muslim who converted to Christianity, “All of the United Nations officials [apparently in Jordan], most of them, 99 percent, they are Muslims, and they were treating us as enemies.”

You have this absurd situation where the scheme is set up to help Syrian refugees and the people most in need, Christians who have been “genocided,” they can’t even get into the U.N. camps to get the food. If you enter and say I am a Christian or convert, the Muslim U.N. guards will block you [from] getting in and laugh at you and mock you and even threaten you…. [saying]  “You shouldn’t have converted. You’re an idiot for converting. You get what you get,” words to that effect.

The next obstacle those few Christians who make it past U.N. refugee camps face are the immigration centers of Western nations themselves.  For example, the discrimination is apparently so obvious in the United Kingdom that Lord George Carey is suing the U.K.’s Home Office for allegedly being “institutionally biased” against Christian refugees and therefore complicit in what he calls “the steady crucifixion of Middle East Christians.”

He is hardly the only one making such charges.  One independent report said that when it comes to offering asylum, the UK “appears to discriminate in favour of Muslims” instead of Christians. Statistics seemed to confirm this allegation:  “out of 4,850 Syrian refugees accepted for resettlement by the Home Office in 2017, only eleven were Christian, representing just 0.2% of all Syrian refugees accepted by the UK.”

Due to such figures, Lord David Alton of Liverpool, a life peer in the House of Lords, wrote to Home Secretary Sajid Javid, who then headed the Home Office:

It is widely accepted that Christians, who constituted around 10 per cent of Syria’s pre-war population, were specifically targeted by jihadi rebels and continue to be at risk….  As last year’s statistics more than amply demonstrate, this [ratio imbalance between Muslim and Christian refugees taken in] is not a statistical blip. It shows a pattern of discrimination that the Government has a legal duty to take concrete steps to address.

Such imbalances appear even stranger on the realization that the Islamic State, which precipitated the refugee crisis, is itself a Sunni organization that only targets non-Sunnis—primarily Christians, Yazidis, and Shia—all minority groups that the U.S. has acknowledged experienced a “genocide.”

Two of the strangest individual cases of anti-Christian bias were reported earlier this year, when the U.K. denied asylum to persecuted Christians by bizarrely citing the Bible and Islam.  Both Christians, a man and a woman, were former Muslims separately seeking asylum from the Islamic Republic of Iran, the ninth worst persecutor of Christians, particularly former Muslims.

In his rejection letter from the UK’s Home Office, the Iranian man was told that several biblical passages were “inconsistent” with his claim to have converted to Christianity after discovering it was a “peaceful” faith.  The letter cited biblical excerpts—including from Exodus, Leviticus, and Matthew—as supposed proof that the Bible is violent; it said Revelation was “filled with imagery of revenge, destruction, death and violence.”  The rejection letter then concluded: “These examples are inconsistent with your claim that you converted to Christianity after discovering it is a ‘peaceful’ religion, as opposed to Islam which contains violence, rage and revenge.”

In the second case, an Iranian female asylum seeker was sarcastically informed in her rejection letter that “You affirmed in your AIR [Asylum Interview Record] that Jesus is your saviour, but then claimed that He would not be able to save you from the Iranian regime. It is therefore considered that you have no conviction in your faith and your belief in Jesus is half-hearted.”

Discussing her experiences, the rejected woman said: “When I was in Iran I converted to Christianity and the situation changed and the government were [sic] looking for me and I had to flee from Iran….  In my country if someone converts to Christianity their punishment is death or execution.”  Concerning the asylum process, she said that whenever she responded to her Home Office interviewer, “he was either chuckling or maybe just kind of mocking when he was talking to me….  [H]e asked me why Jesus didn’t help you from the Iranian regime or Iranian authorities.”

Similarly, when Sister Ban Madleen, a Christian nun who was chased out of Iraq by the Islamic State, wanted to visit her sick sister in the U.K., she was denied a visa—twice.  A number of other Christian orderlies were also denied visas, including another nun with a PhD in Biblical Theology from Oxford; another nun denied for not having a personal bank account; and a Catholic priest denied for not being married.

In another case, Britain’s Home Office not only denied entry to three Christian leaders—archbishops celebrated for their heroic efforts to aid persecuted Christians in Syria and Iraq who had been invited to attend the consecration of the U.K.’s first Syriac Cathedral, an event attended by Prince Charles—but also mockingly told them there was “no room at the inn.”

Considering that persecuted Christian minorities—including priests and nuns—are denied visas, one may conclude that the Home Office is extremely stringent concerning its asylum requirements.  However, this notion is quickly dispelled on the realization that the Home Office regularly grants visas and refugee status to extremist Muslims (not to mention one has yet to hear about Muslim asylum seekers being denied because the Koran is too violent, or because they do not have enough faith in Muhammad).

For example,  despite having no papers on him—and despite telling the Home Office that “he had been trained as an ISIS soldier”—Ahmed Hassan was still granted asylum two years before he launched a terrorist attack on a London train station that left 30 injured in September 2017.  The Home Office also allowed a foreign Muslim cleric to enter and lecture in London, even though he advocates decapitating, burning, and/or throwing homosexuals from cliffs.  According to another report, “British teenagers are being forced to marry abroad and are raped and impregnated while the Home Office ‘turns a blind eye’ by handing visas to their [mostly Muslim] husbands.”

The case of Asia Bibi—a Christian wife and mother of five who spent the last decade of her life on death row in Pakistan for challenging the authority of Muhammad—best sheds light on the immigration situation in the UK.  After she was finally acquitted in November, 2018, Muslims rioted throughout Pakistan; in one march, more than 11,000 Muslims demanded her instant and public hanging.

As Pakistanis make for the majority of the U.K.’s significant Muslim population—Sajid Javid, then head of the Home Office, is himself Pakistani—when they got wind that the U.K. might offer Asia Bibi asylum, they too rioted.   As a result, then Prime Minister Theresa May personally blocked Bibi’s asylum application, “despite UK playing host to [Muslim] hijackers, extremists and rapists,” to quote from one headline.  In other words, Britain was openly allowing “asylum policy to be dictated to by a Pakistan mob,” reported the Guardian, “after it was confirmed it urged the Home Office not to grant Asia Bibi political asylum in the UK…”

On the other hand, the Home Office allowed a Pakistani cleric who celebrated the slaughter of a politician because he had defended Asia Bibi—a cleric deemed so extreme as to be banned from his native Pakistan—to enter and lecture in U.K. mosques.

Discussing how “visas were granted [by the Home Office] in July [2016] to two Pakistani Islamic leaders who have called for the killing of Christians accused of blasphemy,” Dr. Martin Parsons, a human rights activist, expressed his frustration: “It’s unbelievable that these persecuted Christians who come from the cradle of Christianity are being told there is no room at the inn, when the UK is offering a welcome to Islamists who persecute Christians.”

In short, Muslim influence against Christians is not only at work in U.N. refugee camps, as recent evidence indicates, but in the U.K’s immigration policy as well: Christian “infidels” need not apply, whereas radical Muslims are welcomed with open arms.

Ibrahim’s dual-background—born and raised in the U.S. by Egyptian parents born and raised in the Middle East—has provided him with unique advantages, from equal fluency in English and Arabic, to an equal understanding of the Western and Middle Eastern mindsets, positioning him to explain the latter to the former. His interest in Islamic civilization was first piqued when he began visiting the Middle East as a child in the 1970s. Interacting and conversing with the locals throughout the decades has provided him with an intimate appreciation for that part of the world, complementing his academic training.

After a brief athletic career—including winning the 1993 NPC Los Angeles Bodybuilding Championship as a teenager—Raymond went on to receive his B.A. and M.A. (both in History, focusing on the ancient and medieval Near East, with dual-minors in Philosophy and Literature) from California State University, Fresno. There he studied closely with noted military-historian Victor Davis Hanson. He also took graduate courses at Georgetown University’s Center for Contemporary Arab Studies—including classes on the history, politics, and economics of the Arab world—and studied Medieval Islam and Semitic languages at Catholic University of America. His M.A. thesis examined an early military encounter between Islam and Byzantium based on arcane Arabic and Greek texts.