Caroline Glick provides a snapshot of Israel mirroring the U.S. Left among Dems, MSM and unelected government bureaucracy blowing up miniscule policy disagreements into unsubstantiated crimes to get rid of a Conservative oriented Prime Minister Benjamin Netanyahu. President Trump, the Israeli Left is doing to its Prime Minister what the American Left is attempting to do to you.

The reign of the prosecutors 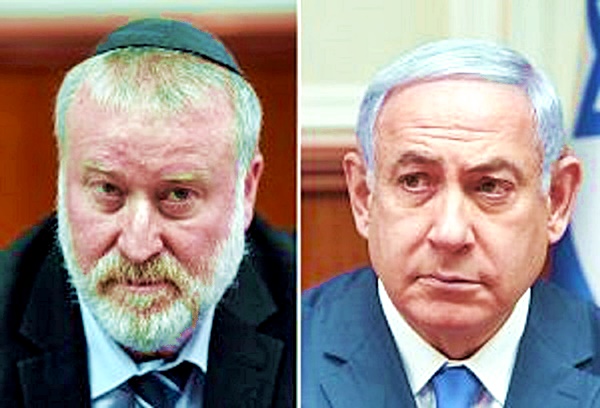 In Israel Thursday morning, the politicians were the big story. Israel Beitenu chairman Avigdor Liberman was the villain who had held the country hostage for nearly a year as he fed his narcissistic personality disorder.

The left’s latest flagship, the Blue and White party is all the once vibrant political camp can put together now that it has lost its ideology. With its god of peace killed by suicide bombers and missiles, and its socialism statues crushed under the weight of bankrupt government companies, all the left has left is Blue and White. The party stands on two planks – destroying Prime Minister Benjamin Netanyahu and eternalizing the regime of Israel’s unelected bureaucrats.

And then there was Netanyahu himself. Thursday morning, his supporters shook their heads in frustration and his enemies clapped their hands in glee at the sight of Israel’s greatest stateman, the leader the public wants to keep in office, unable to form a government,

The conversation about Israel’s politicians lasted less than 24 hours.

At 4 in the afternoon, Attorney General Avichai Mandelblit’s office announced that at 7:30 in the evening he would announce he his decision to indict Netanyahu. The underlying message was crystal clear: The day after Benny Gantz returned his mandate to form a government to President Rueven Rivlin after he failed to get a sufficient number of coalition partners to build a government, Mandelblit said that there’s no point in talking about whether or not Israel is going to new elections in March.

Voters don’t decide anything. The lawyers do. Politicians are irrelevant. The only people who count in Israel today are the unelected attorneys who run the country.

But then we already knew that. And the fact that – as expected – Mandelblit announced sternly that he is indicting Netanyahu on three charges of breach of trust and one charge of bribery was at best anticlimactic. The game was up – if it was ever in play – in February.

Last February, at the height of the first election campaign of the year, when Netanyahu and his right wing coalition partners were leading in all polls by a wide margin, Mandelblit took the unprecedented – and legally dubious – step of announcing his intention to indict Netanyahu of those charges – pending a pre-indictment hearing. The moment he made his announcement, the right began to slide in the polls. The Leader had spoken. And we had no right to question him. Blue and White’s scattershot campaign converged around Mandelblit’s “recommendation.” The left had a rallying cry and a reason to vote. Netanyahu’s neck was on the chopping block.

Ever since Mandelblit gave his “recommendations,” he and his comrades have been the only political actors with any power to speak of. Our actual elected leaders were rendered bit players in the lawyers’ regime. Mandelblit’s announcement Thursday just made it official.

To the cheers of Israel’s corrupt media, for the past three years our legal overlords have gnawed away at all aspects of political power in Israel, and in the process – not that they cared – they corrupted Israel’s legal system from top to bottom. From beginning to end, their criminal persecution of Netanyahu has been a travesty of every norm in democratic societies governed by the rule of law. Carefully edited and wholly distorted recordings and transcripts of police interrogations of Netanyahu, his wife, son, and advisors were systematically leaked to the media. The fact that every such leak was a felony offense was of no matter. Netanyahu’s attorneys submitted request after request for Mandelblit to order an investigation of the criminal leaks. All were summarily and scornfully rejected.

As the probes escalated, overseen by State Prosecutor Shai Nitzan, police investigators extorted Netanyahu’s closest advisors to coerce them into becoming state witnesses against the most successful and admired prime minister Israel has ever had. Investigators threatened Netanyahu’s former spokesman Nir Hefetz that they would destroy his family and bankrupt him if he didn’t turn on Netanyahu. They finally succeeded in breaking him after incarcerating him in a flea infested jail cell for 15 nights, denying him sleep and medical treatment and bringing a young woman he knew into an interrogation room next to him and then threatening to destroy his family.

In the earlier stages of the probes, then police inspector general Roni Elshech spun wild, unsubstantiated and frankly insane conspiracy theories about Netanyahu, including the claim that he hired private investigators to tail police investigators. Elshech then went out of his way to prevent the government from appointing a successor for him as he approached the end of his term of service. Still today, more than a year later, Israel has no police inspector general.

Then of course, there is Mandelblit himself. Mandelblit who claims not to have known about the abuse of witnesses – but then refused to investigate the allegations. And Mandelblit who promised – after publishing his “recommendations” for indictment at the height of the election campaign – that he would approach Netanyahu’s pre-trial hearing with an open mind. That promise was exposed as a lie when the chief prosecutor Liat Ben Ari left the hearing two days early to take her family on a safari in South Africa. Wouldn’t want a little thing like the Prime Minister’s legal fate to ruin her chance to see the elephants.

The same Mandelblit refused to investigate Ben Ari when recordings emerged last month showing that she submitted a false deposition to a court in relation to a lawsuit submitted against her by a former subordinate attorney.

Then of course there is the substance of the charges themselves. The charge that Netanyahu accepted a bribe is based on an invented notion that positive media coverage of a politician is bribery. The notion that press coverage can be considered bribery exists nowhere in the democratic world. No prosecutor in the world has ever indicted – or investigated – a politician or media organization of having committed bribery involving the provision of positive coverage. Senior American jurists appeared before Mandelblit in Netanyahu’s (self-evidently unserious) pre-indictment hearing to warn him that pursuing bribery charges against politicians for receiving positive coverage is a recipe for destroying freedom of the press and democracy itself.

But then, that is the entire point of going after Netanyahu with invented crimes. Now that Netanyahu has been charged for bribery – and incidentally, he never even received positive coverage from the media organ accused of providing it – every politician that gets on the lawyers’ bad side will be sweating bricks any time a reporter writes something nice about him.

After Mandelblit made his primetime announcement, Netanyahu pledged to fight for his freedom and for the restoration of Israeli democracy and the rule of law. In his speech Thursday night, he made an impassioned appeal to his “decent” political rivals to join him in this fight.

If any politicians doubt that Netanyahu’s struggle is their struggle, they should look no further than the prosecution’s announcement last week that it was opening a review, ahead of a criminal probe – of Gantz’s role in the so-called “Fifth Dimension Affair.” The Fifth Dimension was a start-up Gantz headed. Its sale for $14 million allegedly violated standard procedures.

Maybe Gantz did nothing wrong. But then, Netanyahu is being indicted for crimes that don’t actually exist. So it doesn’t matter. The message is clear. Every politician is at the mercy of the prosecutors. Fall out of line, and you will become a criminal suspect before you can say, “prosecutorial abuse.”

It’s certainly true that the left shares the prosecutors’ hatred of Netanyahu. Blue and White exists to destroy him. But all the leftist politicians – and Liberman – who are celebrating today need to understand that the Netanyahu they love to hate is their best friend and defender today. If Netanyahu is found guilty of crimes that were invented for the purpose of destroying him, then their goose will be cooked along with his.

Politicians may make us happy or sad, frustrated or infuriated. But today, in post-democratic Israel it hardly matters. Netanyahu called last night for an “investigation of the investigators.” Unless our elected officials join forces to heed his call, they – and the voters who elected them — will never be relevant again.

@ 2013 All Rights Reserved to Caroline Glick