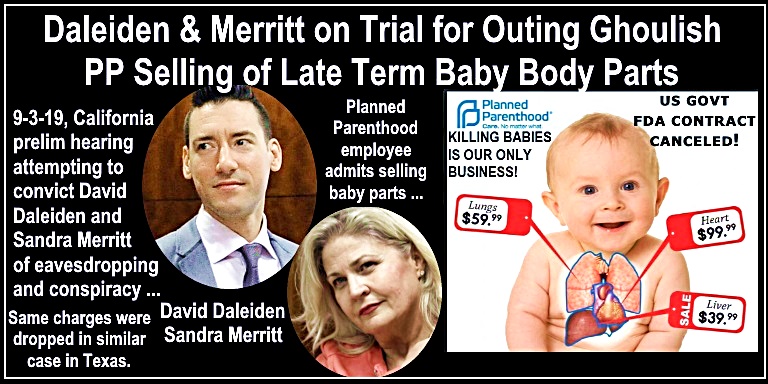 The Center for Medical Progress (CMP) conducted an undercover expose that demonstrated the villainy of Planned Parenthood, National Abortion Federation (NAF), and research entities such as StemExpress on the baby-murder industry. CMP then collated their undercover footage and released them to the public. The undercover work was apparently conducted by CMP founder David Daleiden along with Sandra Merritt.

The State of California got on board with some Planned Parenthood lawfare by using taxpayer resources to unjustly prosecute Daleiden and Merritt by then California Kamala Harris (now Dem Senator and Dem Party candidate for President) continued by California Attorney General Xavier Becerra.

Since CMP exposed criminal activity in the murder-baby industry, Harris and Becerra going after Daleiden and Merritt shows prejudicial favor toward Planned Parenthood.

I learned the political hack job against Sandra Merritt is crumbling with more of the fabricated charges against her have been tossed out by Judge Christopher Hite. Story below:

A judge has dismissed more of the bogus charges against Sandra Merritt, who helped expose Planned Parenthood’s sales of aborted baby parts along with David Daleiden.

Judge Christopher Hite of the San Francisco Superior Court has already dismissed one and a half of the 15 felony criminal charges brought against Sandra Merritt by California Attorney General Xavier Becerra for her undercover journalism work which exposed Planned Parenthood’s trade in baby body parts. The statute of limitations has run out on these dismissed charges so they cannot be brought again.

The undercover videos, most of which were recorded at the National Abortion Federation’s (NAF) 2014 and 2015 abortion convention and trade shows, exposed Planned Parenthood’s illegal involvement in harvesting and selling aborted baby body parts to companies such as StemExpress. The recordings capture Planned Parenthood executives haggling over the prices of baby body parts, picking through bloodied arms and legs of aborted babies in a pie tray, and discussing how to alter abortion methods to obtain better body parts for sale.

Merritt and Merritt’s co-defendant, David Daleiden, the founder of the Center for Medical Progress, are the first undercover journalists to be criminally prosecuted in the history of the state. As Liberty Counsel defends Merritt, no other citizen journalist or journalism organization has ever been charged with a crime for undercover recordings made in the public interest.

During the two-week preliminary criminal hearing, Judge Hite dismissed the charge regarding “Doe 8,” an abortion professor at a taxpayer-funded, public university, who never showed up to testify last week.

The other charge concerned two alleged events with “Doe 9,” a Planned Parenthood doctor. However, half of that charge was dismissed since the attorney general’s office never played the video in court of the alleged incident on April 8, 2014.

Liberty Counsel’s Founder and Chairman Mat Staver said, “Each day of this hearing reveals that this case is frivolous and should be dismissed immediately. The state of California has abused the legal process by prosecuting Sandra Merritt when she did nothing wrong. The entire case should be dismissed.”

Earlier in the hearing, a witness for the abortion industry admitted that the Center for Medical Progress (CMP) videos were “not altered.”

Then the testimonies of two witnesses who worked with Planned Parenthood provided more validation of the gruesome baby body parts trade uncovered by the Center for Medical Progress. The witness, who appears to be the Planned Parenthood abortionist in Daleiden’s first undercover video, was “agitated, bothered and, at times, combative.”

Both she and a second witness, Doe 12 of the biotech company StemExpress, appeared “determined to avoid answering difficult and incriminating questions,” but their sworn testimonies “verified and vindicated” the undercover findings, according to the investigative group.

Doe 9 reportedly tried to avoid answering any questions Friday about harvesting the brains of aborted babies to possibly sell to researchers. In one undercover video, she described how Planned Parenthood abortionists have been “pretty successful” in harvesting intact brains from aborted babies by flipping the unborn baby into a breech position, which sounds a lot like an illegal partial-birth abortion.

“A clearly irritated Doe 9 pretended to not understand the question and refused to give a direct answer about the meaning of her words,” according to CMP.

Daleiden’s and Merritt’s attorneys said they tried to impeach her twice for lying under oath and contradicting her prior sworn testimony.

The expose videos catching Planned Parenthood officials selling the body parts of aborted babies have shocked the nation. Here is a list of all 14:

LifeNews.com is an independent news agency devoted to reporting news that affects the pro-life community. With a team of experienced journalists and bloggers, LifeNews.com reaches more than 750,000 pro-life advocates each week via our web site, email news reports, social networking outreach and weekday radio program.

LifeNews.com also acts as a service provider to furnish news content to media that share the pro-life perspective. The topics covered by LifeNews.com include abortion, assisted suicide and euthanasia, bioethics issues such as human cloning and stem cell research, campaigns and elections, and cultural legal and legislative issues as they affect the pro-life community.

Formerly the Pro-Life Infonet, LifeNews.com has been harnessing the power of the Internet since 1992 to bring pro-life news to the pro-life community. We’ve developed a reputation for fairness, accuracy and timeliness in our two decades of service. We are not affiliated with any organization, religious group, political party or church denomination. LifeNews.com has a privacy policy.

As the founder and Editor of LifeNews.com, Steven Ertelt has provided the pro-life community with news via the Internet since 1993. He also serves as the President of Colorado Citizens for Life, a statewide pro-life group, and … READ MORE