Certainly you’ve of LGBTQ agenda Drag Queen hours in Public Libraries across the United States of  America by now? BUT I found out from MassResistance there are at least five moral City council members out of seven in the Texas city of Leander.

Months of phone calls, emails by local citizens made the difference!

MassResistance notches another victory in the battle against “Drag Queens” targeting young children in public libraries!

KXAN bi-line on Drag Queen Hour – This was the local TV station’s report in Leander, Texas, the day after the City Council vote!

On August 15, The Leander, Texas, City Council voted 5-2 to stop renting out their public library meeting rooms to outside organizations. The Council also voted 6-1 to require background checks for guest presenters for programs in the library involving children 17 and younger. By all accounts, these policy changes will completely stop the “Drag Queen Story Hour” events in the public library.

The Leander City Council votes on the new library policy.

Both of these moves are a direct result of Texas MassResistance activism targeting the “Drag Queen Story Hour” events at the Leander Public Library this year – a story which ultimately made national news.

Here’s how it happened:

As we reported earlier local residents in Leander, a suburb of Austin, contacted MassResistance asking for help. They were outraged that the Leander Public Library was sponsoring a Drag Queen Story Hour, to take place on June 15.

Our Houston MassResistance chapter helped the Leander parents organize and leaflet the community. Soon the Mayor and City Council were flooded with phone calls and emails from angry citizens.

Then Houston MassResistance released a revolting 57-page exposé of the “Drag Queen” who was to be reading to the children at the Public Library event. The social media photos shown in the report are repulsive and pornographic. One could easily see this is definitely not a person you would want teaching anything to young children. 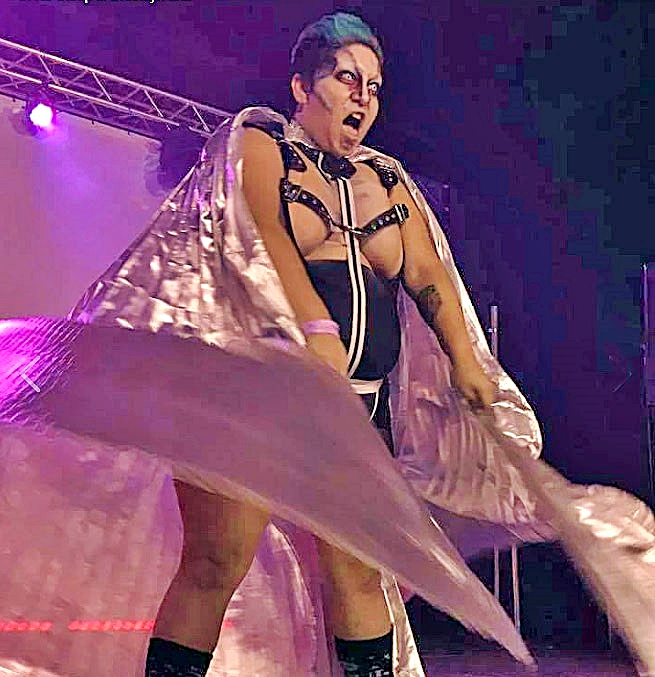 This is the “Drag Queen” that library officials and LGBT activists invited to read to children in their library – exposed by MassResistance.

But as we subsequently reported, this was a short-lived victory. Unfortunately. the local library policies had been changed about a year ago to allow community use of the library building by churches and political organizations.  This allowed a local LGBTQ-affirming church to step in and rent the library room, so the Drag Queen Story Hour could still take place on June 15.

Texas MassResistance announced it would protest the event along with Leander parents and other groups outside the library that day. Almost immediately, the Antifa chapter in nearby Austin announced they were also coming – presumably to harass and intimidate the pro-family protesters.

Texas MassResistance made it clear that they weren’t afraid of the Antifa threats. The Leander police also announced that they intended to protect the pro-family protesters from any possible violence. As a result, Antifa basically backed down and had no visible presence at the protest.

People in town were incensed that this “Drag Queen,” who clearly had no business being around children, was still being scheduled for the event. And they continued flood the library with angry calls and emails.

It worked. The day before the June 15 event, the pro-LGBT church announced that the scheduled “Drag Queen” would not be coming to read to the children – and it would not be a “Drag Queen Story Hour.” Instead, they were re-naming it “Leander Family Pride Festival and Story Time.” But people would still be reading homosexual-themed books to young children, but there would not be Drag Queens in attendance.

MassResistance organized about 100 local Leander pro-family people to show up on June 15 outside the library – to protest the LGBT agenda in their library and in their city. About 75 pro-LGBT people were also came to oppose the pro-family protesters. But they appeared to be just a bunch of random gay activists from out of town, milling about and mouthing their predictable slogans and chants about “hate” and “bigotry.”

Due to the threats by Antifa to counter-protest and likely cause violence, the city went to great expense to secure the rights of all residents to safely practice their freedom to assemble and protest. There were police everywhere. In all, the city spent over $20,000 for protection for the protest – which only added to the outcry against this program.

Dueling banners at the protest. Man in the foreground is reporter for InfoWars.

A lot of local parents brought signs like this one.

In addition, Leander residents were fuming that the city decided to close the library that day except for the exclusive use of the “pride” event – due to “safety concerns.”  This measure seemed a bit over-the-top and unnecessary, according to many people.

The sign outside the Leander Public Library that day infuriated parents.

But the pro-family protest was a big success. It sent a huge message to the politicians in Leander.

National far-left organizations such as the ACLU, the NCAC (National Coalition Against Censorship), and Texas Library Association had already sent letters threatening lawsuits if the Leander City Council were to enact policies to make groups renting the library facilities pay for their own security costs – claiming it would be a “First Amendment violation..” But there was huge city-wide outrage against these sexual programs targeting young children. So the Councilors had to make some tough decisions. They ultimately did what was best for the children and the community.

Thus, on August 15 the City Council voted 5-2 to restrict the use of the library meeting rooms to city departments in their official capacities. The new policies for approving outside presenters brought into the library by city departments will involve background checks if they are presenting to children under 17.

This was a very busy street corner on June 15!

As of now, the city residents are protected from “Drag Queen Story Hour” events in their public library — and other programming from outside groups that is pushes LGBTQ content and ideology onto children.

One of the dissenting City Council members, Christine Sederquist, an ally of the LGBT movement, blamed the expense of the security for the protests on Tracy Shannon and MassResistance.

When Tracy Shannon responded that it was actually the expected violence from Antifa that required the need for expensive police protection – not the peaceful parents from Leander organized by MassResistance – Councilwoman Sederquist posted a vile, unhinged attack against Tracy on social media that included a disgusting sexual invective.

This is unfortunately how the Left reacts to any pushback to their horrible activities – with blatant lies and disgusting verbal abuse. In fact, Tracy Shannon is a very calm person who has NEVER screamed at anyone, certainly not children. Tracy’s online activity is simply exposing the depraved “Drag Queens” that people like Sederquist push on kids.

(How low can the Councilwoman go? She claims to possess dignity, class, and discretion. Yet only an extremely crude person would use the repulsive phrase “get bent” in public discourse.)

The City Council, strengthened by the resolve of many residents who opposed Drag Queen Story Hour, made the right decision to protect the children in their community. Most cities have ordinances to keep sexually-oriented businesses away from libraries, churches, and schools because they should not be around children. Now Leander has enacted further policy to ensure that sexually explicit entertainers stay away from children in what would otherwise be benign, less controversial programs.

But we’re not done cleaning house yet.  We’ve just learned that the Leander Library has scheduled a “Pride Storytime” on Oct. 12. There will be no Drag Queens and any adults participating will require a background check. We have a strong feeling that local parents getting tired of the LGBT agenda being pushed to children by their city. We’ll see what happens with that!

Going forward, MassResistance activists will continuing putting pressure on locally-elected and countywide bodies to adopt strict policies to ensure that sexually perverse Drag Queen Story Hours targeting children are kept out of their libraries and other public venues.

We’ve already heard reports that other cities will be adopting ordinances similar to Leander, Texas to restrict inappropriate use of public spaces in taxpayer-funded venues like local libraries. We will keep you apprised of future successes!

Please help us continue to do our uncompromising work! Our successes depend on people like you. Donate to MassResistance. Your support will make the difference!