Somali national Mahamud Tooxoow Mahamed, who I am guessing is in the USA benefiting from Obama’s Islamic refugee policies, has been officially charged for killing Jessica McCormack and kidnapping her three young children.

I have not located any information on Mahamed’s apprehension nor in the manner he may have killed McCormack whose dead body was found stuffed in a suitcase.

I am being facetious, perhaps the FBI could look at fellow Somali refugee Ilhan Omar’s Minnesota backyard, who I have no doubt fraudulently attained U.S. citizenship.

Ann Corcoran’s Frauds, Crooks and Criminals has some of the grisly details on the murder/kidnapping of accused Mahamed.

In the little meatpacking town of  Noel, Missouri, a Somali national is wanted for kidnapping children of a deceased white woman whose body was stuffed in a suitcase and found along Highway 59.

As of right now, Mahamud Tooxoow Mahamed, a former Tyson Foods employee, is still on the loose.

Authorities are looking for Mahamud Tooxoow Mahamed, 37, a Somali national.  Charged with kidnapping, but did he kill Jessica before he took the kids?

First here is the news about the body of Jessica McCormack being found,

MCDONALD COUNTY (KFSM) — The McDonald County Sheriff’s Office has identified a woman whose body was found along Highway 59 near Noel, Missouri.

Jessica McCormack. –I blame our PC culture for creating a whole generation of naive young women not sufficiently warned about African immigrants.

Jessica McCormack’s body was found July 29 on a steep hillside beside a suitcase along Highway 59 between Noel and Ginger Blue.

Investigators say the 25-year-old had not been seen since the middle of July. Authorities were not notified by anyone that she had been missing.

The children have been identified as 4-year-old Siah Casillas, 20-month-old Saidah Noor and 7-month-old Intisar Mahamed.

It is believed that at least one of the children was fathered by Mahamed.

Here is the most recent news,

A Noel man has been charged in federal court with kidnapping the 4-year-old daughter of a woman whose body was discovered in a suitcase last month. Read the full press release below:

Mahamud Tooxoow Mahamed, 37, a Somali national***, was charged in a criminal complaint filed late Tuesday in the U.S. District Court in Springfield, Mo. Mahamed is not in federal custody and is a fugitive from justice.

According to an affidavit filed in support of the federal criminal complaint, the body of Jessica McCormack, of Noel, was discovered on July 29, 2019, near Missouri Highway 59 between Lanagan, Mo., and Noel.

The last time McCormack was seen alive, the affidavit says, was when law enforcement officers responded to a call at her home on July 16, 2019. Also present in the residence were Mahamed, who was identified as McCormack’s paramour, and McCormack’s three daughters, identified in court documents as Jane Doe 1 (four years old), Jane Doe 2 (two years old), and Jane Doe 3 (six months old). Jane Doe 2 is Mahamed’s daughter.

McCormack’s children could not be located after her body was discovered and identified. 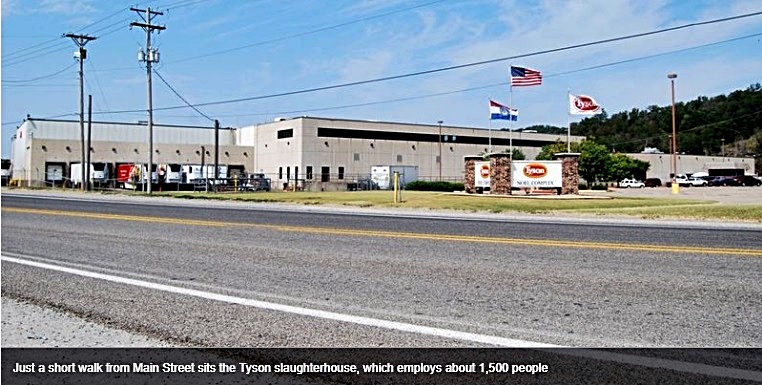 An Amber Alert was issued for McCormack’s three children, who were located at a residence in Des Moines, Iowa, and taken into state custody on Aug. 8, 2019.

According to the affidavit, a woman who formerly worked with Mahamed at the Tyson plant in Noel told law enforcement officers that Mahamed arrived at her Des Moines residence with the children on Aug. 5, 2019. She discovered he had left on Aug. 8, 2019, the affidavit says, when she found a note from Mahamed informing her that he could not care for the children.

*** By the way, almost all Somalis in the US came in through the US Refugee Admissions Program.  At Refugee Resettlement Watch I had an extensive archive on how meatpackers and their appetite for cheap labor were negatively changing the heartland.

About Frauds, Crooks and Criminals

During the next two years Americans will be bombarded by the media with news about the joys of diversity and the economic boom ‘New Americans’ are bringing to the US.

However, it’s important that the voting public sees the full picture.

Yes, there are deserving immigrants arriving in America, and then there are those who are frauds, crooks and criminals.

And, of course, there are American criminals as well.

I’ll mention some of those too. In fact, I will have to because most law enforcement and the media rarely report the immigration status of crooks and criminals!

DONATE TO Frauds, Crooks and Criminals