If you have Muslims friends or acquaintances, they don’t want you want to know this information. If you ask about what you are about to read, that Muslim probably will not admit this information veracity.

Ignore Islam At Our Peril

It is obligatory for a Muslim to follow Islamic laws and not man-made laws like the US Constitution, a Muslim can never be both a Muslim and an American at the same time. Hence, a Muslim is, first and foremost, an Ummahist– a citizen of international Islam...

There is no shortage of Islamic materials on the market for anyone curious enough to seek the truth for himself. I personally have written hundreds of articles about Islam and the threat it poses to our Constitution. The painstaking task of educating the American public about this threat has not stopped Islam’s advancement in America. I am puzzled as to why no one takes this threat seriously? Europe is already badly infected with Islamism. It is the canary in a coalmine. It is telling us Islam’s next stop is America.

Many Americans have the common sense to see that Islam and Western values are incompatible. They would like to see Muslims assimilate and become part and shareholders of this great nation. On the contrary, however, it has been the complete opposite. Not only do Muslims not assimilate, they are actively involved in imposing their ideology on non-Muslims, in the hope that someday America will be conquered and fall under the rule of Islam. To Muslims, no other religion or manmade law is deemed worthy of recognition, much less accommodation.

When American officials opened the gate to the hordes of Muslims and permitted massive numbers of them to enter America, our culture and our way of life was forever altered. Just look at Minnesota or Dearborn, Michigan. Minneapolis’ Somali community has become the terrorist recruitment capital of the US. At the same time, elected US officials do absolutely nothing to combat this vital threat to our society and culture. 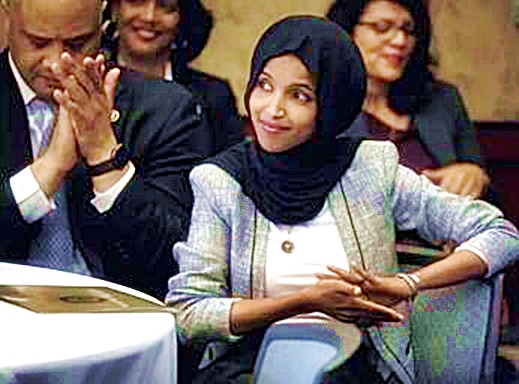 Ilhan Omar attended the Iftar alongside Democrats such as Rashida Tlaib and Alexandria Ocasio-Cortez. Via Washington Post/Getty images.

We have a serious problem that no one wants to discuss simply because they fear to be called Islamophobe or racist. The American people don’t have the means or power to stop the wrecking ball that is Islam. They rely on their elected officials to be on top of this. But these elected officials play politics by avoiding the issue. In fact, many of them appease these newcomers with open arms and allow them to impose anything and everything their hearts desire. Why? Very simple, money.

It is a sad fact that money drives politicians to power and keeps them there. Without money, they would never make it to first base. Without more money, they might just languish at first base. To advance further to real power, politicians need large sums of money. And people who have money, as a rule, do not give them money without exacting payback. The higher the politician goes, the greater is his IOU to the people within the organizations that own him.

Like every transaction in life, dealing with moneyed people is a barter system. The politician becomes an employee of the funder(s). The contract, as it is generally the case, favors the employer—the money. The employee, the politicians, often finds himself in a trap. He is, in effect, a purchased agent with little or no leeway. If he deviates in the least from his commitment, he may find himself out of work and more.

Islamic organizations with great interests in promoting Islam are fully familiar with the power of money to recruit people to do their bidding. That’s why many non-Muslims work at all levels of government and the society at large to further Islam. In short: they are paid to do a job.

It is worth mentioning, because it is obligatory for a Muslim to follow Islamic laws and not man-made laws like the US Constitution, a Muslim can never be both a Muslim and an American at the same time. Hence, a Muslim is, first and foremost, an Ummahist– a citizen of international Islam. Thus, it is crucial for Muslims to donate money to those politicians in order to advance the cause of Islam.

What can the voters do? They can start by vetting the candidate. If the candidate has no knowledge of Islam’s Stealth Jihad that currently moves at the speed of light in the US and refuses to be direct and transparent with his constituents, that candidate has absolutely no business to run for office. In fact, he would be a disaster. It falls into the hands of voters alone to decide whether to vote for the survival of America or for their favorite candidate no matter what.

Frankly, We the People, are outmanned and outgunned by these group forces. Lone rangers win only in make-belief movies. In real life, governments, institutions and organizations are the ones who prevail. They have the funds to buy the services of the media; employ lawyers, politicians, and mercenaries of all stripes.

Amil Imani is an Iranian-American writer, satirist, novelist, essayist, public speaker and political analyst who has been writing and speaking out about the danger of radical Islam both in America and internationally. He has become a formidable voice in the United States against the danger of global jihad and Islamization of America. Amil maintains a website at www.amilimani.com. Imani is the author of Obama Meets Ahmadinejad and Operation Persian Gulf and is currently working on his third and fourth book. He is 2010 honoree of EMET: “The Speaker of the Truth Award” at the Capitol Hill.