Senators Ted Cruz and Bill Cassidy have filed a Resolution to name the Communist organization Antifa a terrorist organization. Only if you are a blind or indifferent Dem if you deny the violence being conducted against Americans Patriots.

Below is the cross post of the Clarion Project asking you to support the petition. OR if you are pinched for time, you can go HERE to directly add your name.

Sign Our Petition to Designate Antifa as a Terror Organization 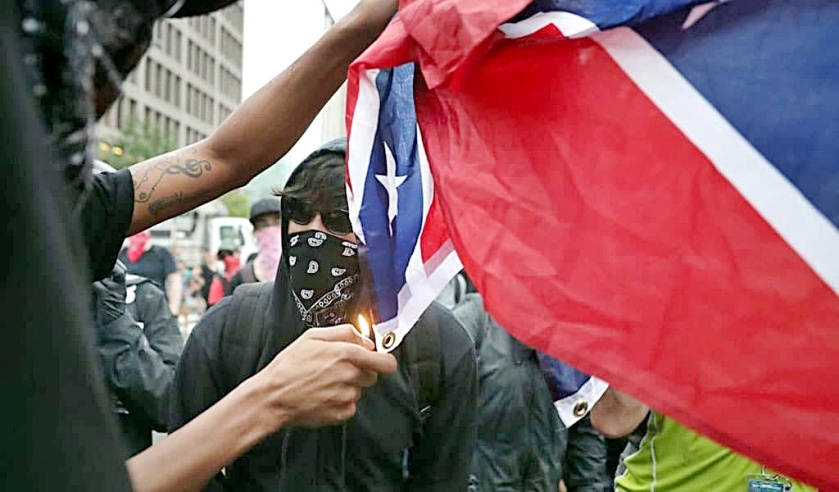 President Trump tweeted over the weekend that he is considering designating Antifa as a terror organization.

Consideration is being given to declaring ANTIFA, the gutless Radical Left Wack Jobs who go around hitting (only non-fighters) people over the heads with baseball bats, a major Organization of Terror (along with MS-13 & others). Would make it easier for police to do their job!

Trump’s tweet comes on the heels of a resolution proposed on July 19, 2019 Senators Ted Cruz and Bill Cassidy to designate Antifa a terrorist group.

“Antifa is a terrorist organization composed of hateful, intolerant radicals who pursue their extreme agenda through aggressive violence,” Cruz said.

As noted by the president, Antifa is a radical Leftist group known for using violence to propel their agenda. Most recently, they targeted and attacked conservative journalist Any Ngo — among others — at a demonstration in Portland, Oregon, sending Ngo to the hospital with a brain bleed.

The violent group also bashed heads of other conservative demonstrators, including two elderly men who were severely hurt by Antifa members.

Antifa has a history of using violence against those who disagree with them. They previously commandeered streets in downtown Portland while the police were given orders to stand down, a decision supported by the mayor. At one point, activists chased down a 74-year old man after protesters pounded on his car and broke a window. A woman in a wheelchair was verbally harassed.

At another demonstration, Antifa was even more violent [Blog Editor: The below Clarion quote is from a Tweet removed by Twitter or its author]:

Portland Antifa beats an elderly man bloody with a crowbar. As another man attempts to help, he is hit in head with crowbar then sprayed in face with mace.

Antifa was also responsible for the 2017 violent demonstration and subsequent riots in Berkeley. Its members were reacting to conservative pundit Milo Yiannopoulos being invited to speak on campus. During the riots, Antifa members smashed the windows of a Marine Corps recruiting office after sucker-punching someone who voiced opposition to them.

Sign Our Petition to Designate Antifa as a Terror Organization

The Clarion Project (formerly Clarion Fund) is a 501(c)3 non-profit organization dedicated to educating both policy makers and the public about the growing phenomenon of Islamic extremism. The Clarion Project is committed to working towards safeguarding human rights for all peoples.

Clarion Project is a non-profit organization that educates the public about the dangers of radical Islam.

The ClarionProject.org web site delivers news, expert analysis, videos, and unique perspectives about radical Islam, while giving a platform to moderate Muslims and human rights activists to speak out against extremism.

Clarion Project engages in grassroots activism to achieve its goals.

One thought on “Clarion Project Promotes Terrorist Designation for Antifa”