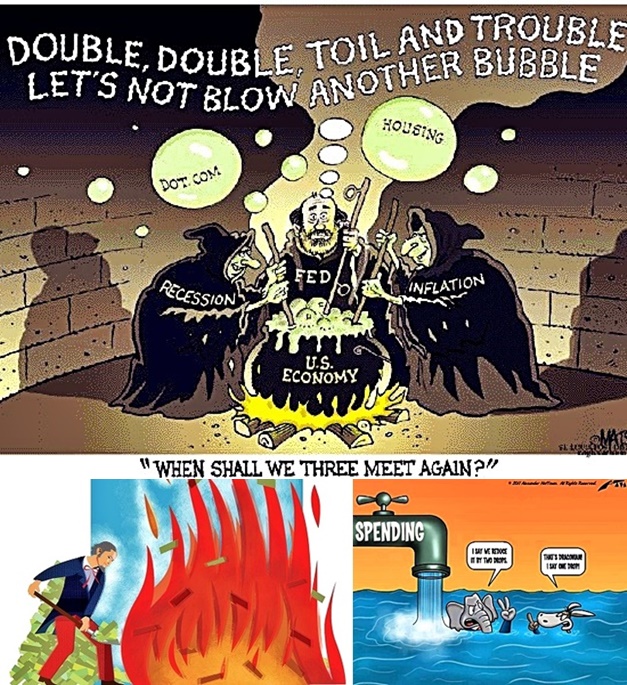 I have to be honest. Working with the reality of numbers often hurts my brain. I’m not good at. Justin Smith seems to have a great grasp of number realities when it comes to deficit spending, the National Debt, Gross Domestic Product and the need of a Balanced Budget.

Justin is displeased with the results of the Trump Administration/Pelosi budget agreement and urges a Presidential veto. No matter how much the numbers are painful, the inevitable result will be catastrophic if this Federal accounting disparities continue.

However, the realities of America’s political divide demonstrated by near even splits of opposing ideologies in Congress means neither the Socialists nor the fiscal Conservatives will get what they want. Perhaps an idiotic budget compromise keeps the government operating rather than frozen. EVEN THOUGH it’s doom and gloom, if voters DO NOT opt soon for fiscal responsibility a national catastrophe will occur.

Trump’s hands are tied by political realities, if voters want a different outcome untie divisive politics – OR ELSE.

A coward’s financial agreement is the phrase that best describes the budget deal recently agreed upon by President Trump and Speaker Nancy Pelosi, that just passed the House with a vote of 284 to 149 at 2:14 CST on July 25th, since it avoids any real battle over government spending by suspending the debt ceiling until July 2021. It raises spending caps and lifts the debt ceiling in the name of avoiding a fiscal crisis, but in reality and ignoring any lessons from 2008, this explodes U.S. debt in a way never seen in U.S. history, and it exhibits President Trump’s willingness to meekly surrender to another massive expansion of the federal budget, that creates a short term political “win” for the DC Establishment of both parties and a long term loss for the American people.

This deal received 65 Republican votes, and it spends $2.7 trillion over the next two years. It commits President Trump to signing spending bills that add $320 billion above spending limits set in a 2011 agreement that established automatic spending cuts. This Pelosi Dream Deal also says there will be absolutely no limit on how much new debt the federal government can accumulate between now and July 31rst 2021.

The Washington Post was absolutely correct, when it recently wrote that the budget and debt deal would not contain actual spending cuts, since the $150 billion in new spending cuts demanded by White House budget director Russell Vought soon materialized as only [about] 70 billion in actual cuts, that don’t go in effect for ten years and are likely to be reversed by Congress at a later date. This marks a retreat for the White House.

Reported by the Wall Street Journal, Maya MacGuineas, president of the Committee for a Responsible Federal Budget, stated on July 22nd: “This deal would amount to nothing short of fiscal sabotage.” [Blog Editor: I found quote at USA Today]

And yet, rather than debate the most serious issue of the day and seek real solutions, the cowards of both parties hid behind “bipartisanship”, in an erroneous, corrupt and wrong-minded fashion, and cooperated to serve their own personal political interests, as DC’s supposed “elite” elected class.

Our current National Debt Ratio to the Gross Domestic Product has averaged right at 100 percent, between 2010 and the present. This is even higher than the 94 percent [average] the nation saw between 1944 and 1950.

Incredibly, the federal government spent $3,355,970,000,000, in the first nine months of this fiscal year, while running a $747,115,000,000 deficit. President Trump’s Treasury is currently issuing U.S. dollars faster than it did in fiscal 2009 — even when adjusted for inflation — when President Bush signed the bailout legislation for failing banks and President Obama signed a Stimulus bill focused on ending our economic recession.

Noted by The Hill, grave concerns on the economy were expressed by the Congressional Budget Office on July 23rd [Blog Editor: I could not confirm a 7/23/19 date, the links in thos paragraph relate to a 6/25/19 date], and the CBO wrote in its budget projection that U.S debt is on track to increase from 78 percent of the GDP to an “unsustainable” level of 144 percent of the GDP over the next thirty years, even if spending caps aren’t lifted and taxes are raised. Now, with the passage of this bill, we are on track to see the debt rise to 219 percent of the GDP, unless President Trump can be persuaded to send the bill back with a demand that more actual spending cuts must be made.

Representative Chip Roy (R-TX) was upset with President Trump for negotiating through Treasury Secretary Steve Mnuchin, rather than Office of Management and Budget Director Russell Vought. As reported by the Wall Street Journal, Roy exclaimed, “The president should be listening to (White House Chief of Staff) Mick Mulvaney and Russ Vought, and he should not be listening to Steven Mnuchin, period.” Roy added that “Senate Republicans will never find a corner where they can go and hide”, implying that Senate Republicans are untrustworthy regarding fiscal responsibility.

Once consumed by fiscal worries, this coward’s agreement is one more sign that makes it more than clear, both houses of Congress and both the Democratic Party and the Republican Party have become Big Spenders, and Congress is no longer concerned about the extent of the budget deficits or the debt they add. The DC Establishment no longer cares, even as our national debt hits one trillion annually and rapidly approaches $23 trillion.

According to the Washington Post, Senate Majority Leader Mitch McConnell (R-KY) recently stated: “Nobody has lost an election by spending too much money”, in regard to Chief of Staff Mick Mulvaney’s effort to pay for the spending deal.

After the last massive spending deal, President Trump vowed never to sign another one. And yet, here he is again, at the ready and far too willing. He just keeps confirming to the American people that he really is a Big Government Guy and a Big Spender.

Today, America barely hears any objections over the exorbitant debt. When Trump campaigned in 2016, he bragged about his ability to prosper from his own debt. He told CNN, on May 4th 2016: “I’m the king of debt. I love debt.” … adding the next day … “if the economy crashed, you could make a deal … if the economy was good, it was good … you can’t lose.”

But that’s not just the reality of matters for most Americans who live paycheck to paycheck, and it is just not smart for anyone or any nation to accumulate debt; at some point another bubble will burst in our economy, since Wall Street hasn’t stopped any of the bad business practices that caused the 2008 crisis. And, an economic collapse of 2008 magnitude will pale in comparison to the coming economic catastrophe that deals such as this one are sure to create. Most of our national debt has been monetized, and any bailout for the American people will be virtually non-existent.

Niall Ferguson, senior fellow at Stanford University’s Hoover Institute, has warned that empires fall when interest on their debt equals what they spend on defense. According to the Office of Management and Budget, this will happen around 2024. If interest rates increase, it could arrive much sooner.

Unfortunately, America is currently a nation focused on instant gratification, selfishness and greed, and seems oblivious to the dangerous path it is on. Whether or not the nation can afford all the current government benefits, plus the desired additional costs of free university educations and free healthcare for all, and even though our credit card is maxed out, Americans seem intent on voting for politicians who promise to borrow money to give them what they want.

Everyone would do well to recall that in Psalm 37:21 it says, “The wicked borroweth, and payeth not again: but the righteous sheweth mercy, and giveth.”

Noting that Congress’s out-of-control spending “is ripping off the American family”, former Congressman Dave Brat recently delivered the following observation to Tony Perkins at Washington Watch, as he looked across the Atlantic: “There’s evidence you can be pathetic for a long time. And the evidence is called Europe. … eventually … debt will impinge on your economic growth rate as it has been. And what’s really missed in the point is it’s intergenerational theft. And I mean that quite literally. We are stealing from our kids and the next generation to the extent that our deficit is $1 trillion. We’re spending $1 trillion and getting the goods from it right now — and the kids are going to have to pay for [everything] we’re consuming. And so it is literally theft. So they’re going to have to work hard, pay their taxes, get tax increases, pay off the debt, and pay all their own personal bills for our runaway spending binge.”

America has embraced reckless spending and She doesn’t even pretend to repay what She owes. She incurs more debt daily at an unprecedented rate and most of Her current leaders do not acknowledge that this is even a problem. And so, if our leaders have one shred of human decency and honesty, of a personal or intellectual kind, rather than pander for votes, their bipartisan action should warrant a majority of both parties to end this deal and move forward on a deal that truly cuts all unnecessary spending, or President Trump must reconsider this deal and veto it, rather than continue on a path that watches our deficit soar and attacks our nation’s solvency and the future prosperity of America.

Source links and text embraced by brackets are by the Editor.