Why do you think the Dems are so supportive of ILLEGAL Aliens invading the USA? How does such an influx of criminals by virtue of being here illegally benefit the objectives of the Democratic Party?

Answer: a future voting base to further transform America away from its founding roots and heritage of Life, Liberty and the Pursuit of Happiness in the land of entrepreneurial opportunity. 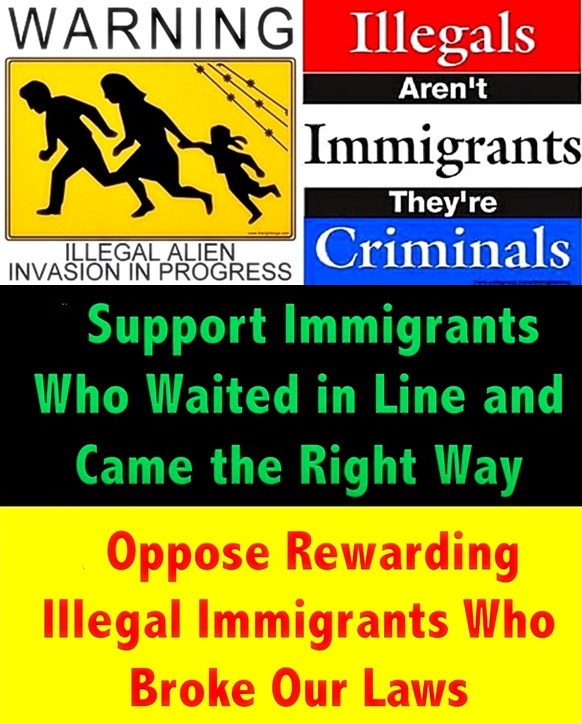 Open to Every Stranger Under the Sun – Disgusting and Shameful

Today in America, there isn’t any other issue more dangerous to all Americans and poised to completely ruin America and tear Her asunder than the necessity of stopping the anti-American, communist inspired globalist and Democratic Party initiatives and policies, that advocate and facilitate Open Borders, free healthcare, voting rights and U.S. citizenship for ILLEGAL Aliens. America is either a nation of laws and the rule of law or it isn’t. America and Her people either stop this madness or Americans will watch as we lose our culture and our American heritage, and indeed, America as She has stood for over 200 years. [Bold Text by Blog Editor]

Over a year and a half ago, President Trump called for American’s to set aside their differences and “to seek out common ground, and to summon the unity we need to deliver for the people … the people we are elected to serve.”

I’m pretty damned certain President Trump was speaking about the American people and not the Illegal Alien invaders now attempting to force their way into the nation and even demanding entrance. There isn’t any common ground to be found today between the Democratic Party, who represents Illegal Aliens’ interests over those of actual citizens and the Conservatives of America, who are fighting to save the Republic from their Open Borders policy and their flagrant flaunting of the law.

Recently, in response to an ICE operation aimed at carrying out thousands of deportation orders on July 14th, some two thousand protesters gathered outside of the GEO Group’s federal immigration detention center in Aurora, Colorado on July 12th, voicing their anger over Illegal Aliens being held in “cages”, in the same manner seen in at least ten other U.S. cities over this particular weekend. In what has become all too common place a display of Anti-American sentiment, shocking and despicable nevertheless, these protesters defaced an American flag with spray painted words “Abolish ICE” and the raised it upside down and alongside the Mexican flag.

One young toddler of obvious European descent was pictured in a stroller carrying a sign that read, “Would you steal me from my mother and lock me in a Filthy Cage?”

They seem to have forgotten, or they simply choose to ignore, the fact that rivers of blood have been spilled under the American Flag to defend and preserve the freedom they enjoy today, as they use their “rights” to abuse the nation in such a vile, despicable and reprehensible fashion, placing their hatred for America on full display.

Claudia Castillo, a former U.S. Army Major and an intelligence officer, was there as a representative for the Colorado Immigrant Rights Coalition. She told the Denver Post that those who took part in the disrespect of the American Flag shoved her, cursed her and spit on her when she tried to stop them. Castillo said, “It was disgusting and shameful”. And many Americans agree with you Major.

Meanwhile, at approximately 4:00 a.m. on Saturday, July 13th, Willem Van Spronsen, an Antifa member, attacked the Northwest Detention Center, the local ICE facility in Tacoma, Washington. According to the Tacoma Police Department, Spronsen was throwing incendiary devices, setting cars ablaze, and armed with a “homemade” AR15 when they stopped him, killing him, before he could detonate the facility’s propane tank, which could have resulted in the mass murder of the facilities guards and those in detention.

In his manifesto [Blog Editor: Manifesto text on pro-Antifa website actually eulogizing the terrorist as a hero. Can you say seeds of Civil War?], released by KIRO7, Spronsen said he wanted to make a statement at the facility, writing: “I regret that I will miss the rest of the revolution. Doing what I can to help defend my precious and wondrous people is an experience too rich to describe. I am Antifa.” If he was truly interested in defending his “precious people”, he would have been defending them against being robbed, raped and murdered by illegal aliens every day, every week and each year.

While Spronsen was attacking an ICE facility, New York’s Marxist Mayor Bill de Blasio was telling Illegal Aliens, “we will do everything we can to protect you.” DeBlasio and others have essentially announced that they are openly violating federal immigration laws.

Speaker Nancy Pelosi urged Illegal Aliens to resist deportation on July 11th. She suggested that they have the right to refuse to open their doors to ICE agents who try to apprehend them in any national sweep aimed at their deportation. In similar fashion, Alexandria Ocasio-Cortez’s campaign sent out a mass email, that said the same thing, except with a lot more detail on how to interact with ICE, and in seventeen different languages.

What a load of Bull Manure. It is this sort of Commie Lunacy that aids criminal Illegal Aliens over the good and decent Americans. These nuts in our society and even Congress are protecting Illegal Alien criminals.

Thankfully, on July 12th, acting ICE director Thomas Homan gave a compelling and emotionally charged accounting for his actions, before Congress, and put AOC in her place, when she castigated him on separating children from families, by noting that even U.S. citizens are separated from their children when they commit a crime. AOC countered that seeking asylum isn’t illegal, but was shown her error and left speechless and fumbling with her papers, when Homan stated: “if you want to seek asylum, then go to a port of entry. Do it the legal way. The Attorney General (Barr} of the United States has made that clear.”

In connection with their report on July 12th, Immigration and Customs Enforcement confirmed to the Prairie State Wire in Illinois, that Jose Rodriguez, who struck and killed Corey Cottrell on June 22nd, is an illegal alien. And, according to ICE, Rodriguez had an expedited removal order dating all the way back to April 17th 2013.

Breitbart reports that there are 1.7 million people from Central America and Mexico living in the United States who have been issued final deportation orders. Breitbart also noted that Illinois became a sanctuary state in 2017 and currently harbors 400,000 illegal aliens from being detained and deported. Rodriguez was even granted bail by Illinois despite his deportation order.

Engulfing our country with their outrageous and dangerous crap, the blood of thousands of maimed and murdered Americans is on the hands of the corrupt and criminal Congressmen and their supporters, who are obstructing good immigration law and securing our borders. Every damn day more Americans die at the hands of Illegal Aliens and Congress does nothing other than continue their protection of criminal Illegal Aliens.

From the first day of the 1965 Immigration Act, the law has been utilized by Democrat administrations to single-handedly alter the face of America forever, and rather than do their duty to America and the Constitution, we see political prostitutes in Congress, represent the antithesis of America’s Founding and openly defy the intelligent enforcement of more than four hundred federal statutes aimed at preventing illegal aliens, drugs and terrorists and weapons of mass destruction from crossing our borders. They have turned the nation into a flaming cauldron of cultural and ethnic differences, in the name of multiculturalism and diversity, and their efforts are resulting in the erosion and destruction of our entire Founding, through mass migrations of people with little respect or love for America’s Western and Judeo-Christian Principles, much less our Constitution.

Article IV, Section 4 of the U.S. Constitution reads: “The United States shall guarantee to every state in this Union a Republican Form of Government, and shall protect each of them against invasion; and on Application of the Legislature, or of the Executive (when the Legislature cannot be convened) against domestic Violence.”

And yet, mass legal immigration into America isn’t adequate enough for the red, radical, communist Democrats, who scream “racist” at the very mention of the border wall, calling it a “monument to white supremacists”. However, anyone paying attention understands this is all theater in their fight to ensure their power and control of the U.S. government for the rest of the century.

Today, rather than throw America’s doors wide open forever to hordes of the Ungrateful and despite Emma Lazarus’ words, “Give me your tired, your poor, your huddled masses yearning to breathe free …”, America should take sound counsel and allow entry to only those hopeful immigrants who support our principles and Constitution and come not to subvert and overthrow our republic as aliens and enemies.

No nation can last forever when its borders are open to every stranger under the sun.

Source links and text enclosed by brackets are by the Editor.