Adina Kutnicki takes a look at former CIA Director John Brennan. Kutnicki asserts the unsurprising to Conservatives about Brennan; viz., liar and criminal. Of course the Kutnicki rundown implicates other crooked Dems but Brennan is the focus.

Amidst the Kutnicki examination are three videos. The first is an interview with John Guandolo talking of Brennan clandestinely converting to Islam. The second video is a little over an hour long and posted May 13, 2019. The second video’s theme is that Brennan will be imminently indicted for treason-related crimes and pedophilia. As to the second, we’ve all heard these notices of impending actions in the past and if you are like me – I’ll believe it when I see it (really ONLY the first 1/3 of the hour is relevant – the rest money making ads). The third video is a Fox News/Catherine Herridge report (posted 5/15/19) implicating Brennan, Comey and Clapper in pushing unverified Steele Dossier knowing the info was unsubstantiated.

I so much hope Kutnicki’s gleanings ring true even though I am maintaining a wait-and-see attitude for actual verification.

Brennan’s Treachery Comes Full Circle – As Evidenced At These Pages, 2013 To Date

“The Shepherd Boy And The Wolf”, a classic short story, is often taught to junior and senior high school students to illustrate the importance, relevance, and contextual framework of morality. Its overall basis breaks down thusly: “once a liar, always a liar.” Similarly, “once a crook, always a crook” should be considered a comparative axiom; an extrapolation thereof. Bare bones lessons in morality.

AS such, it is hardly a shock that John Brennan, a serial liar with a monstrous size crooked bent, continues to be exposed at these pages. In fact, he made his debut (alongside HUSSEIN Obama, and the equally lying and criminally bent, Hill) in January 2013 – a mere few months after this site’s inception. That fast. Not for nothing.

IN this regard, before evidencing Brennan’s full circle and blessed reckoning  (now that the deep state sh*t is hitting the fan ala the blow-back from the bought and paid for claptrap-filled dossier), let’s perform a righteous cleansing akin to a colonoscopy. No kidding.

John Guandolo served as a U.S. Marine and as an FBI Agent. He is a Muslim Brotherhood expert who was one of several individuals to contribute to the Team B II report. Earlier this year, he appeared with Tom Trento of the United West and made the claim that CIA Director John Brennan converted to Islam while in Saudi Arabia in the 1990’s. The interview ran nearly 50 minutes but has been pared down to the best 10 in this clip.

This interview originally took place in February of 2013. The original link is here: https://www.youtube.com/watch?v=nlni3UpYaUc] 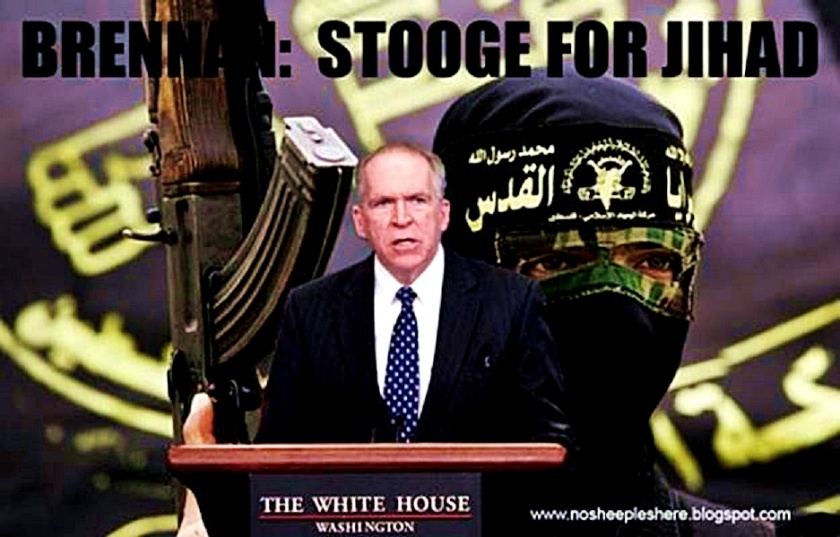 NOW, as we power onward to the present state of (traitorous) affairs, here’s some additional ammunition – all of which was warned about at this site, in one form or another.

IN the main, isn’t it time for Brennan (and fellow surrogates) to go down?? Apparently. Faster….faster…..

VIDEO: John Brennan To Be Indicted For Treason

Former CIA Director John Brennan is about to be indicted for high treason, an attempted coup against President Donald Trump, and for and child trafficking. A former Intelligence officer says when this indictment is unsealed, expect violence and civil unrest the likes of which this nation has never seen before. David Zublick unseals the truth in this special report!]

BUT, as always, disputes are taking place – as to which of his facilitators at DOJ are the main collaborators behind the trumped-up Steele dossier. Six of one, half a dozen of the other…..

BUT, most significantly, rational folks can discern: America has come to a point in time, a ‘do or die’ fork in the road, notably, a critical juncture in its modern history. Know this: Without a full-on cleansing, a reckoning, and jailing(s) alike, the Republic will die – sooner than later.

AND while this is not a prognosis that is easy to deliver, it is hardly the time to despair. Weaken. For truth dare be told, in reality, it is past time to BUCK UP!!