The infamous Steele Dossier used by the Dems to try to frame President Trump for working with the Russians to steal the 2016 from Crooked Hillary did have an author who claims he had sources. The author or at least compiler is British former MI6 agent Christopher Steele – hence the most used appellation of the Steele Dossier.

So, did Steele merely create a work of fiction to villainize an American he didn’t like? Did Steele have a source (or sources) framework to construct the dossier that was and is unverified? AND if those sources exist, how reliable are they?

Chuck Ross writing for the Daily Caller some how has discovered potential sources via notes taken by State Department official Kathleen Kavalec. Accordingly the sources she noted were high level Russian Intelligence personnel.

My guess is Dem Trump-haters desired to believe the disinformation so badly, they observed at best the data was factual. AT WORST these Dem Trump-haters cared little about accuracy and colluded directly with Steele and perhaps indirectly colluded with Russians to frame Trump to first win 2016 for Crooked Hillary and/or failing the objective then impeach President Trump.

Of course my narrative is speculation. Time will tell how close my speculation is. I am willing to bet that “time” will show I am pretty darn close.

I’ll mention the names of those Russian Intelligences sources, but my guess you’ll never remember those hard to pronounce names even if those names begin to circulate among the Leftist Mainstream Media: Vyacheslav Trubnikov and Vladislav Surkov.

AND NOW, the Daily Caller cross post by Chuck Ross.

The references to Trubnikov and Surkov, which have not previously been reported, are not definitive proof that either were sources for Steele’s dossier or that they were involved in an effort to collect blackmail material on Trump.

But the notes are significant because they are the first government documents that show Steele discussing potential sources for the information in his dossier, which the former MI6 officer provided to the FBI.

Trubnikov also has links to Stefan Halper, an FBI informant who collected information from Trump campaign aides George Papadopoulos and Carter Page. Halper arranged for Trubnikov to visit intelligence seminars at the University of Cambridge in 2012 and 2015. He also tapped Trubnikov to contribute to a Pentagon study published in 2015.

Kavalec took the notes during an Oct. 11, 2016, meeting with Steele at State Department headquarters. The documents, which were released earlier in May by Citizens United and first reported on by The Hill, show Steele laid out many of the same allegations about Trump and his advisers that are found in the infamous dossier.

Trubnikov and Surkov are not identified by name in Steele’s dossier, which the FBI used as part of its investigation into possible collusion between the Trump campaign and Russia. But the information that the former British spy attributed to the two Russians involves the dossier’s most salacious allegation: that the Russian government had sexually compromising material on Trump.

Kavalec’s notes said Steele claimed Trump was “filmed engaged in compromising activities” with Russian prostitutes in 2013, but that “the Russians have not needed to use the ‘kompromat’ on [Trump] as he was already in cooperation.”

Steele, who operates a private intelligence firm in London, told Kavalec that Putin and some of his top advisers were running the Trump operation.

Kavalec’s handwritten notes also contain a reference to Trubnikov and Surkov as “sources,” but with no additional explanation.

Trubnikov served as head of Russia’s foreign intelligence service, SVR, from 1996 to 2000. He went on to serve as first deputy for foreign affairs and ambassador to India.

The unverified allegations of sexual blackmail material on Trump are included in the June 20, 2016, memo from Steele’s dossier. Steele had been hired that same month by Fusion GPS, an opposition research firm the DNC and the Clinton campaign paid to investigate Trump.

Citing “a former top level Russian intelligence officer still active inside the Kremlin,” Steele claimed Russian authorities had gathered a substantial amount of “embarrassing material” on Trump and would “be able to blackmail him if they so wished.”

It is difficult to know how to interpret Steele’s claims about Trubnikov and Surkov, given the numerous problems that have emerged with the former British spy’s reporting.

The special counsel’s report all but debunked Steele’s core claim of a “well-developed conspiracy” between the Trump campaign and Kremlin. The report also said Michael Cohen did not visit Prague, which is where Steele claimed the former Trump lawyer met with Kremlin insiders to pay off computer hackers.

Public evidence has not backed up other allegations, including about “kompromat” on Trump. The president has vehemently denied the sex tape claim, and individuals who were with Trump during his Moscow trip have cast doubt on the allegation, saying Trump had virtually no time to take part in the steamy activities described by Steele.

Steele, who operated in Moscow through 2009 before leaving MI6, relied on a network of sources and sub-sources, some of whom are said to have worked in Russia. Virtually nothing is known about Steele’s collectors, but it has been reported that some of the sources who Steele cited in the dossier unwittingly provided information that ended up in the 35-page document.

A former CIA station chief in Moscow, Daniel Hoffman, said discerning how Steele obtained and used information from Trubnikov and Surkov is “tricky.”

“Was [Steele] collecting intelligence on Trubnikov, or was he using Trubnikov to collect intelligence? Those are two different things,” Hoffman told The Daily Caller News Foundation.

Hoffman said Trubnikov remains a “trusted guy in the Russian national security bureaucracy,” despite not having an official title in Russian government for over a decade.

“They never stop,” Hoffman said of Russian intelligence operatives. “There’s no such thing as a former intelligence officer. The guy is going to be reporting back to the SVR or Putin.”

Hoffman has been a leading proponent of one theory about the dossier that has gained traction in the wake of the special counsel’s report. The former CIA officer has argued Steele likely fell victim to a Russian disinformation campaign.

A growing number of experts in Russian intelligence operations have embraced the theory, and Attorney General William Barr testified to Congress on May 1 that he is concerned about the prospect and is looking into it.

Hoffman has written that if the Russian government hacked Democrats’ computer systems, they could have figured out that Steele was trying to gather information on any connections between the Kremlin and Trump. Steele is also likely known to Russian intelligence given his covert work in Moscow, making it easier for Russian operatives to uncover his intelligence-gathering operation.

Hoffman said it’s difficult to determine whether Trubnikov and Surkov were involved in a disinformation campaign — saying “it’s a hall of mirrors” — but that it can’t be ruled out. He said he could envision a scenario in which Trubnikov could sniff out Steele’s operation and spin the dossier author’s collector with false leads. 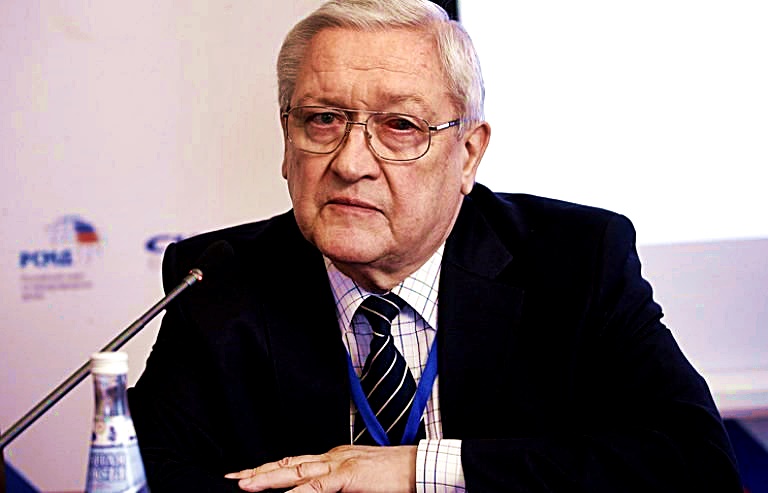 Trubnikov’s links to Halper, the FBI informant, are also a source of intrigue.

Halper tapped Trubnikov to contribute to a study he did in 2015 for the Pentagon’s Office of Net Assessment (ONA) titled “The Russia-China relationship: The Impact on the United States’ Security Interests.” Halper, who served in three Republican presidential administrations, was paid over $1 million from 2012 through 2018 for reports from ONA, which is led by Pentagon officials Andrew May and James Baker.

Halper established contact with Papadopoulos, the Trump campaign aide, under the guise of contributing to a study on energy security issues in the Mediterranean and Middle East.

Halper paid $3,000 to Papadopoulos to write a paper on the topic. During meetings in London, Halper and a covert government investigator, Azra Turk, plied Papadopoulos for information on any contacts between the Trump campaign and Russia. While no evidence has emerged that Halper paid Papadopoulos out of ONA funds, a source familiar with Halper’s work for ONA told The DCNF that $3,000 was a sum he often paid contributors.

(RELATED: Who Was ‘Azra Turk’ Working For?)

Halper also cozied up to Page in the midst of the 2016 campaign. The pair met for the first time July 10, 2016, at a political event hosted at Cambridge University. They remained in contact through September 2017, which is the same month the FBI ended its electronic surveillance on Page.

Halper might also have had a role in sharing information about Michael Flynn, the former national security adviser.

The Washington Post and The New York Times have reported Halper and Sir Richard Dearlove, the former chief of MI6, expressed concerns about interactions between Flynn and a Russian-British researcher at Cambridge named Svetlana Lokhova.

Flynn visited the Cambridge Intelligence Seminar in February 2014, when he served as director of the Defense Intelligence Agency.

Several news outlets published stories in 2017 about Flynn and Lokhova, with the thinly veiled suggestion that the pair had a romantic fling and that Lokhova was trying to compromise Flynn. Lokhova has vehemently denied allegations of any impropriety with Flynn, and no evidence has emerged to suggest that there was any.

Halper and Dearlove publicly raised concerns about possible Russian infiltration of the Cambridge Intelligence Seminar. In December 2016, Halper was quoted in a Financial Times article saying he was resigning from the seminar due to “unacceptable Russian influence on the group.”

According to two sources for the FT piece, Halper and Dearlove feared “that Russia may be seeking to use the seminar as an impeccably-credentialed platform to covertly steer debate and opinion on high-level sensitive defence and security topics.”

Despite his concerns about possible infiltration at Cambridge, Halper twice provided a platform for Trubnikov at the Cambridge Intelligence Seminar. Trubnikov spoke at the university May 4, 2012, and May 11, 2015. The latter appearance was rescheduled because Trubnikov had issues with his visa, according to a program for the event.

Christopher Andrew, who convened the intelligence seminar with Halper and Dearlove, took Halper to task over the FT article, according to an email obtained by The DCNF.

“I am somewhat shocked by the comments attributed to you in today’s FT. I can well imagine that you’ve been misquoted but do need to know as a matter of urgency what you actually told the FT,” wrote Andrew, who serves as official historian for MI5, the British domestic intelligence service.

Disinfo as Fact to Frame Trump

Content created by The Daily Caller News Foundation is available without charge to any eligible news publisher that can provide a large audience. For licensing opportunities of our original content, please contact licensing@dailycallernewsfoundation.org.

About The Daily Caller

From exposing shocking mismanagement of Republican National Committee funds to exclusively revealing the FBI’s interview with Hillary Clinton, The Daily Caller’s reporting has been thorough and tough on members of both political parties. In 2016, The Daily Caller emerged as a news leader in covering the U.S. presidential election, providing around-the-clock, on-the-ground coverage of the primary process, the debates, and the general election. The Daily Caller was also included as a full-time member of the traveling press pool for the Democratic nominee.

The Daily Caller’s reporters are credentialed members of the U.S. Senate and House press galleries. We also provide comprehensive coverage of the executive branch, with a dedicated White House correspondent and membership in the White House Correspondents’ Association. Additionally, The Daily Caller is a member of the White House in-town press pool, responsible for dispatching reports to the global press at White House events on a monthly basis.

The Daily Caller’s reporting is distributed worldwide to over 20 million unique readers each month through our highly-visited homepage, wildly popular newsletters and … READ THE REST