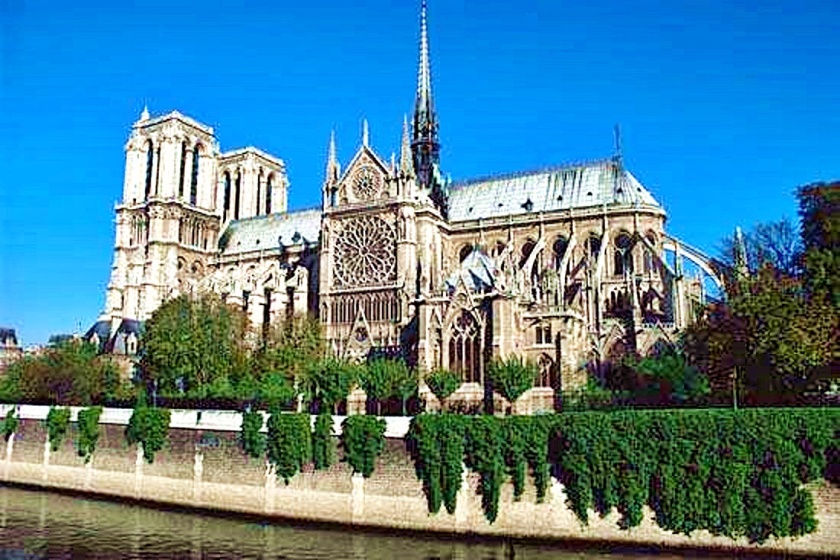 On April 15 Notre Dame Cathedral was torched by accident or by arson. French officials lean to the former but the observation of a spate of French and European Church arsons lead to the valid speculation of arson. Many of the Church arsons have been linked to Islamic Supremacists who disdain the Christian faith. Could the Holy Week that includes Palm Sunday, Good Friday and Easter Sunday be a nefarious message to Christians?

Justin Smith sent his thoughts a couple of days ago trying to sift through fact, speculation and conspiracy over the Notre Dame Cathedral blaze.

A Crown Jewel of Christendom Burns

“Should that subduing talisman, the cross, be shattered the frenzied madness of the ancient warriors, that insane Berserk rage of which Nordic bards have spoken and sung so often, will once more burst into flame.” ~ Heinrich Heine 1834

Flames danced and leaped across the rooftop of Notre Dame Cathedral on April 15th 2019, and the world stood aghast and watched helplessly and somber from along the banks of the Seine River, singing hymns, weeping, embracing each other and praying. Onlookers gasped in horror, as they watched the fire ravage the 859 year old historic cathedral in catastrophic fashion, and they cried out as the 295 foot tall spire of this iconic symbol of Western Christendom plummeted and slid into the flames and centuries of history were burned to ash.

Nobody really knows what happened, although the major news sources were falling all over themselves to make certain not one single person was allowed to ask if there was an Islamic terrorism connection. Shepherd Smith and Neil Cavuto, Fox News hosts, both cut guests off for raising the question. They immediately called it “an accident” related to renovation work.

Well … as Notre Dame Cathedral burned, I couldn’t help but immediately think the Muslims had finally succeeded in bringing it down, especially since they have already tried so many times in the past, most recently in 2016. There was even an apparent Muslim seen on the scaffolding near where the fire started not long before it started. And that’s what makes Shepherd Smith’s refusal to even listen to one of his guest’s comments regarding the arson of hundreds of churches in France so maddening.

Phillipe Karsenty began, “For the past years, we’ve had churches desecrated each and every week all over France.”

Smith immediately reprimanded, “Sir, sir, sir, we’re not going to speculate of the cause of something that we don’t know! If You have observations or you know something, we would love to hear it.” When Karsenty tried to respond, Smith ended the entire interview.

Wasn’t Karsenty’s statement on the desecration of Christian churches in France an “observation” and a statement based on “[knowing] something”?

The scaffold was the first time in ages that any access was available to the roof area and its 5,000 oak timbers. I can’t say for sure it was a Muslim who committed arson, or even that it was arson, but to immediately dismiss arson and call it an accident before ANY investigation whatsoever has been fully conducted and completed is the height of sheer idiocy and weepy liberal foolery and cowardice.

To so casually dismiss any suggestion of Islamic terrorism, when April 15th is the date that Mohammed started compiling the Koran and coincides with many other Islamic historic events — not to mention the Boston Bombing — is a slap in the face of all Frenchmen and the entire Christian world, especially in light of the fact, that according to Raymond Ibrahim and Judith Friedman of the Gatestone Institute, 1,063 attacks on Christian churches, statues and crucifixes were registered in France in 2018, and 878 similar attacks were registered in 2017. Muslim terrorist attacks on Christians in France rose by 38 percent between 2015 and 2016, from 273 attacks to 376 attacks against churches and other places of worship.

On April 2nd, The Washington Post reported: “Among attacks on churches in February, a cross of human excrement was found in the southern city of Nimes, a statue of Mary was smashed in a Paris suburb and a statue of Jesus was decapitated …”.

On March 17th, Saint-Sulpice, the second largest church in France erupted in flames, and the police determined it was arson, no accident. The fire damaged doors and stained glass windows on Saint-Sulpice’s exterior. And St. Sulpice was just one of a dozen such desecrated churches over one seven day stretch in March, in egregious acts of anti-Christian vandalism and arson.

The cause of the fire at Notre Dame Cathedral may be found later, depending on how much effort the authorities actually exert; however, the significance of its eruption on the first day of Holy Week has not gone unnoticed. If this fire was purposefully set, the arsonist picked the perfect time. The results are devastating and will be long-lasting.

However, the leaders of France, especially President Macron, have become such cowards and so politically correct that they would prefer allowing the Islamic terrorists a few successes here and there, such as the scores of Muslim “no go zones” across France. The French government bends over at the waist to keep from pouring oil on the fire of Muslim rage, so the obvious truth regarding anti-Christian furor and its Islamic origin is permanently and intentionally obscured. The Muslim miscreants are not properly scrutinized, and yet those who dare to associate the desecration of Christian symbols to these Muslims are ostracized, de-platformed and accused of racism, hatred and hate speech.

The Church and Christianity are under attack from every part of the Western secular humanist, atheistic and Islamic world one wants to mention. Far too many seek to maliciously portray Christianity as bigoted, close-minded and hard-hearted, but it is far from any such thing. Christianity has facilitated and inspired the most beautiful works of art in history, and it encouraged freedom and science, after the Reformation. Christianity has been the epitome of self-sacrifice, charity and love of man and God across the ages.

During a period when most people of France were illiterate the beautiful wall carvings and stained glass of Notre Dame Cathedral, now so badly damaged, taught the lessons of the Bible and reinforced the doctrines that are the foundations of the Christian faith. The craftsmanship and artistry of the Cathedral instructed the people and instilled them with a spirit-filled and holy awe and wonder.

Hot righteous anger coursed through my entire body, as I saw videos of men of Arabic ethnicity, obviously Muslims, smiling and laughing as Notre Dame burned. The Muslims lit up social media with comments like “Allah est Grand” and “It’s time to say good-bye to your oratory polytheism” — referencing Christian belief in the Trinity. Not one person nor millions of contrarians will ever convince me that Muslims want to assimilate and coexist with the people of Western Civilization. They hate us and they arrive as invaders, and that’s why they laugh, rejoice and celebrate at each tragedy that befalls us or each act of terror that one of their brethren — dastardly anti-American, anti- West, anti-Christian and Jew Sons of Allah successfully carry out; tell me again about all the “good” Muslims, and I’ll tell you there aren’t any and call “b*llsh*t”.

If this doesn’t convince the majority of Americans to halt all Muslim immigration into America, especially after 9/11, the Boston Bombing and all the evil Islam brings with it, I don’t know what will. Perhaps America too will fall the way of Europe.

The French, and most of Europe too, have allowed Islam, antithetical to Western principles, to infiltrate their culture, infrastructure and government, as they also destroy their own liberty through communism too, another ideology opposed to Western principles. Having long abandoned distinct Christian virtues to the immoral and intellectually dishonest multiculturalism nonsense, they assumed the Muslims too would embrace tolerance of others and a multicultural society, however, in their arrogance, oh how they were wrong. As I write this, the Islamists around the globe seek the end of France, Christianity and the West.

Notre Dame Cathedral is a world treasure and a crown jewel of Christianity that has been much loved and revered by millions, since its completion in 1345 A.D. It has served in countless celebrations and processions proclaiming the glory of God to all of France. It survived the French Revolution and attempts to melt its tower’s bells. It’s the site of Napoleon’s coronation as emperor. It survived two world wars with little damage, and it is where General Charles de Gaulle attended mass amid rifle fire to give thanks for the liberation of Paris in 1944.

Built over a pagan temple, Notre Dame Cathedral was the work of generations and spanned two hundred years, during which its craftsmen and laborers beat considerable architectural and logistic challenges. Thousands of tons of stone was cut by small armies of stone cutters and was transported from outside of Paris, one cart at a time, while its tall ceilings and walls were supported by the architectural innovations of the rib vault and flying buttress. [See Also National Geographic]

Communism, socialism, nihilism and Islam have all targeted Notre Dame Cathedral over the centuries, and what they couldn’t achieve, a yet to be explained brief moment brought much of it tumbling down, whether it was Islamic arson or the Hand of God Himself.

French President Emmanuel Macron exclaimed: “Notre Dame is aflame … Great emotion for the whole nation. Our thoughts go out to all Catholics and to the French people. Like my fellow citizens, I am sad to see this part of us burn tonight.”

Night fell in Paris and the fire roared on, moving the crowds of the Faithful to come together in their heartbreak and disbelief, raising their voices in a chorus of “Ave Maria”, that rose above the flames. The poignant images were shared millions of times across social media networks by that Monday evening, with many calling the scene in Paris both “powerful” and “moving”.

In less than nine hours, we saw fifty-two acres of oak timbers consumed by the flames, as Priests rushed to save the many pieces of priceless artwork and statues and the Cathedral’s treasury, and we saw nearly 500 firefighters fight to save the Two Towers and the stained glass windows that depicted stories from the Bible and the doctrinal truth associated with them. The flames did their work all too well; and in the process, the inferno took the heart of France and much of the world.

Fortunately, the relic of the Crown of Thorns was saved, and this alone is a mercy to celebrate, even as we weep for what has been lost.

Relic of the Crown of Thorns worn by Jesus

Source links and text embraced by brackets are by the Editor.

Earlier versions of this post do appear in other online publications and blogs. The title chosen is from various choices provided by Justin Smith yet selected by the Editor.

11 thoughts on “A Crown Jewel of Christendom Burns”