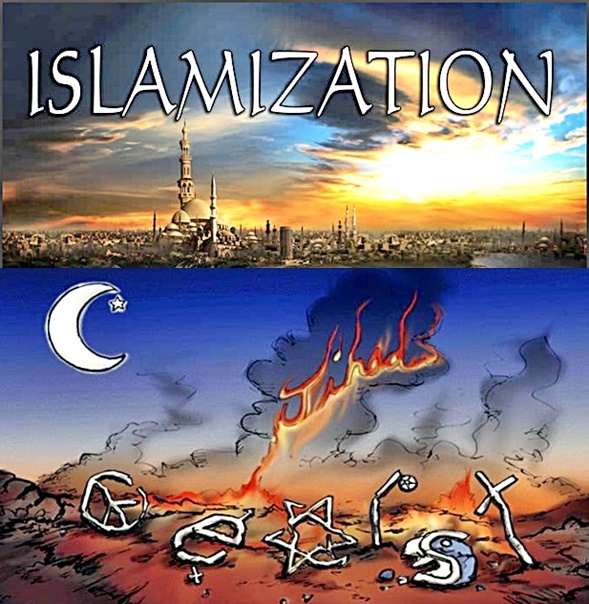 I haven’t posted an expose Islam piece in awhile. I’m a bit pressed for time so I’m reaching back a couple of days from my Facebook Group with the long unwieldy name to post a couple of Justin Smith observations (Social Media Jail Conversations for Conservatives & Counterjihadists — Feel free to join if you’ve come close to the edge of Facebook’s Community Standards Censorship).

As the Editor I took the liberty in making the title. I have a suspicion Justin’s thoughts on Islam may have appeared elsewhere under a different title, perhaps even on one of my blogs.

Islam cannot reform itself. It is structured precisely to reject any such attempts; several have been tried and failed from the 12th century to the present, all due to doctrines that block any reform, such as the doctrine of abrogation and the Muslims’ acceptance of their “prophet” as the highest example of the “perfect” man.

To attempt to reform Islam is to admit that Mohammed was flawed and so too is Islam, and this they will not and cannot do; it goes against everything they are taught from birth, and yet, the intelligent few independent thinkers that arise within its ranks, such as Ayaan Hirsi Ali and my dear friend Sam Solomon will escape its clutches from time to time.

Sam is now a nationally renowned author here in Nashville and a convert to Christianity who tours the nation speaking about the lies and fallacies in Islam and gives a comparative analysis translating the Arabic verses to English while explaining that Islam is not of the Word and the Abrahamic people of the Bible.

I feel confident in saying that no matter how hard modern day reformers such as Irshad Manji and Dr. Zuhdi Jasser try, they will NEVER be able to reform Islam, not in this lifetime and not in a thousand.

Just look at Turkey and all the reforms initiated in the early 1900s by Kemal Ataturk [Blog Editor: Armenian perspective – Greek perspective] . Today we see them destroyed and Erdogan bringing back Islam in its most traditional form. Erdogan wants the old Turkish Ottoman Empire restored with himself as its Caliph [CBN, International Policy Digest & Breitbart].

Now look at Muslims in America, such as Representatives Ilhan Omar and Rashida Tlaib. Omar has been in America for the past 28 years, from the age of eight, and yet she sounds more like a foreign agent advocating for the “Palestinian people” than any American citizen raised in Minneapolis, as she trashes the United States each time she makes a statement. Tlaib was born here in the U.S., but one would never know it by the way she celebrated her election to Congress by waving a “Palestinian” flag; and she too is an advocate for Palestine, as are most of her constituency in Michigan.

And so America must ask, “Why are we still allowing Muslims to enter our country?”

What is the endgame here, if not our own national suicide at the urging of America’s communists, who hide their politically correct tripe and their agenda behind a guise of diversity, multiculturalism and “humanitarian concern”?

HALT ALL MUSLIM IMMIGRATION TO THE UNITED STATES NOW.

DEPORT ALL FOREIGN BORN MUSLIMS FROM OUR COUNTRY NOW (including Ilhan Omar).

DEPORT ALL U.S. CITIZENS WITH ANY TIE TO ISLAMIC TERRORISM, AND EXECUTE THE ONES WHO ARE CAUGHT IN REAL PLOTS TO COMMIT HEINOUS TERRORIST ATTACKS.

I hope I have made my position clear. I’ve mailed this to Congress and the President. You too should make Yourself clear to Your elected representatives.

Text embraced by brackets and source links are by the Editor.

8 thoughts on “USA Under Islam?”