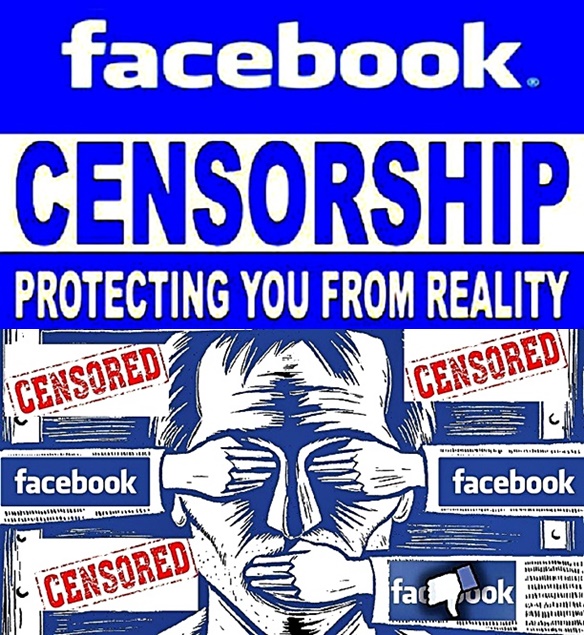 Justin Smith noticed one of Blogs has received HUGE censorship status on Facebook. I operate three blogs all with different names. The blog so far, under Facebook censorship attack is SlantRight 2.0. My other two blogs are on WordPress (NeoConservative Christian Right [NCCR]) and on OverBlog (Ubiquitous8Thoughts). I mention all my blogs because I suspect after sharing this post on Facebook via the NCCR blog, a censorship ban will occur.

Just as a side note, I use OverBlog out of curiosity. OverBlog is based in Europe (France in particular) existing under EU Free Speech limiting laws. I’ve been wondering when OverBlog will boot me for breaking EU laws. Sticking up for Biblical Morality and criticizing the dark side of Islam are Hate Speech violations in the EU. AND YET, Ubiquitous8Thoughts still is in operation. I suspect the reason is low readership.

After Justin Smith posted on my Facebook Group – Social Media Jail Conversations for Conservatives & Counterjihadists – that Facebook was censoring my flagship blog, I went to the Facebook Support page to see how bad the censorship is. It is bad.

I created that Facebook Group out of frustration of landing in Facebook jail more than once. I sense another Facebook jail term in my future. If not an outright ban or perhaps termination of my small Facebook membership. I welcome all to join at least as a symbol of being AGAINST Facebook censorship.

By the way. If you have received the boot from Facebook, the social media platform MeWe is gaining ground in popularity. My MeWe Profile Page. MeWe isn’t quite as simple to use as Facebook, but it’s getting there.

All three of my blogs have a link for a contribution (sorry, not tax deductible) that helps with paying for services I use in blogging efforts:

In case anyone wonders, here are Facebook’s nebulous Community Standards:

Safety: People need to feel safe in order to build community. We are committed to removing content that encourages real-world harm, including (but not limited to) physical, financial, and emotional injury.

Voice: Our mission is all about embracing diverse views. We err on the side of allowing content, even when some find it objectionable, unless removing that content can prevent a specific harm. Moreover, at times we will allow content that might otherwise violate our standards if we feel that it is newsworthy, significant, or important to the public interest. We do this only after weighing the public interest value of the content against the risk of real-world harm.

Equity: Our community is global and diverse. Our policies may seem broad, but that is because we apply them consistently and fairly to a community that transcends regions, cultures, and languages. As a result, our Community Standards can sometimes appear less nuanced than we would like, leading to an outcome that is at odds with their underlying purpose. For that reason, in some cases, and when we are provided with additional context, we make a decision based on the spirit, rather than the letter, of the policy.

Everyone on Facebook plays a part in keeping the platform safe and respectful. We ask people to share responsibly and to let us know when they see something that may violate our Community Standards. We make it easy for people to report potentially violating content, including Pages, Groups, profiles, individual content, and/or comments to us for review. We also give people the option to block, unfollow, or hide people and posts, so that they can control their own experience on Facebook.

The consequences for violating our Community Standards vary depending on the severity of the violation and a person’s history on the platform. For instance, we may warn someone for a first violation, but if they continue to violate our policies, we may restrict their ability to post on Facebook or disable their profile. We also may notify law enforcement when we believe there is a genuine risk of physical harm or a direct threat to public safety.

Our Community Standards, which we will continue to develop over time, serve as a guide for how to communicate on Facebook. It is in this spirit that we ask members of the Facebook community to follow these guidelines.

On Justin’s Facebook post I linked to the titles that are used by him as censored by Facebook. You should check them out to see if you think they are worthy of censorship according to Facebook Community Standards. Here are a few other titles censored from the SlantRight 2.0 blog (in no particular order of censorship):

Do me and Justin a favor. Share the be-jesus out these posts (probably not on Facebook, but you can give it a shot).

It’s simply unbelievable and unfathomable that Facebook would mark my tribute and memorial to Pete Doughtie, my friend and editor, as something that goes “against community standards”. And so it begins Folks.

My article ‘The Passing of a Great Man’ at Slanted Right is the piece being targeted, as well as several other pieces — one on immigration ‘The Democratic Party Endangers America’s Cultural Heritage’ and my latest pieces on abortion — ‘The Baby Murder Act’ and ‘Beyond A Sad Day In America’.

Anything that highlights conservative causes, our nation’s founding principles, issues related to life, and anything else that rankles the Communists of the Democratic Party and Facebook and Google and Twitter IS BEING PURGED, BANNED AND DELETED.

Facebook, Google and twitter and all those on the Left who use these CENSORSHIP TACTICS Must be made to suffer the consequences of their illiberal, tyrannical actions … however we may accomplish it.

Predictably, Facebook has banned my articles from Slanted Right … the last four pieces as near as I can tell, starting with ‘The Passing of a Great Man’.

I’d like to know, just how in the hell does a memorial for a man who did so much for his community, his state and America, go “against community standards”. Here was a man who knew Ted Cruz, Geert Wilders and a litany of other high ranking government officials … which numerous photos document … and Facebook says my tribute to him “violates community standards”.

I hope they are just focused on my articles right now and not the actual website. But when I tried to copy and paste a Slanted Right URL, Facebook wouldn’t let the preview appear.

It’s time to call FB on the carpet, before Congress and force Congress to make them halt the violation of our Free Speech and Freedom of Expression RIGHTS, since they are a publicly traded stock. We should also mount a petition to force the break-up of Facebook AND Google Under ANTI-TRUST LAW.

We are really under attack, even if it is just a soft attack at the moment. But this is just a foreshadowing of things to come, and this is how it has always started in other authoritarian countries, just before they used armed violence against their own citizens.

While it’s true that FB has no weight of government behind it technically, in practice, its money is moving the federal government to either look at FB with a blind eye or simply ignore the problem, even as the Democratic Party and some RINOs advocate FB “hate-speech” policy and attempt to place it in “law”. Any such “hate-speech” RULE CANNOT BE LAW, SINCE IT VIOLATES THE FIRST AMENDMENT.

The day any such illegitimate and UnConstitutional “Law” passes both houses of the Congress is the day I leave dead communist red radical rat Democrat and RINO bastards in my wake.

We are living in dangerous times. Never has Freedom and Liberty been so tenuous and vulnerable and at risk of being lost. And the majority of the American people are asleep at the helm.

God Bless You All and God Bless Our Beloved America. May He Keep Her Free For All Eternity and Damn Her Enemies Both Foreign And Domestic To The Hell They Have Earned And So Richly Deserve.

And In Liberty ~ Justin O Smith