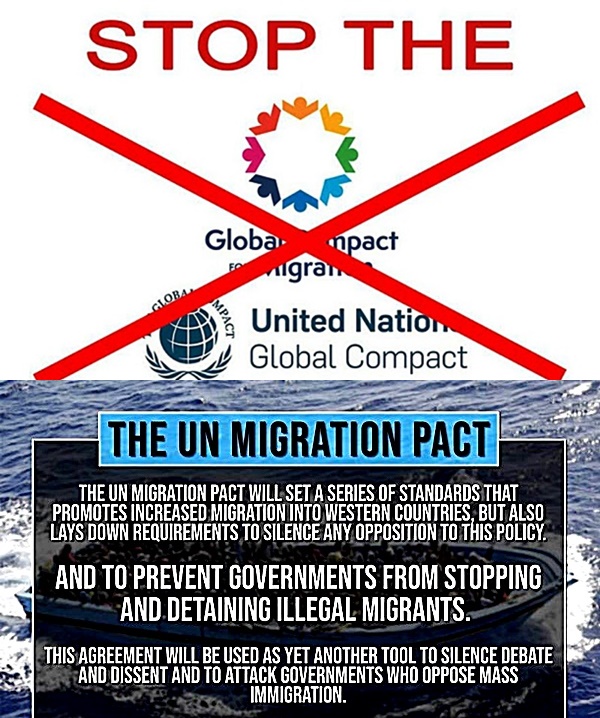 Since the MSM primary propaganda agenda is to publish as much fake news as possible hoping to lead to President Trump’s impeachment, you may not catch too much info on a United Nations globalist agenda.

I used to pay attention to this UN Leftist-globalist agenda that smacks of a One-World -Government paradigm. You can brush up on this UN paradigm by searching for all thing Agenda 21. Be warned in your search on Agenda 21, much if not most of Left-Wing sources (too often government friendly sources) paint a utopian picture land management, food production and population management (which really is human depopulation).

In relation to National Sovereignty and a UN globalist paradigm, Claudia Rosett looks how the UN’s globalist migration policies threatens the U.S. rule of law with the attempt to make rules/international laws supersede U.S. sovereignty and by extension the supremacy of the U.S. Constitution within our national borders.

Points I found of interest I placed in bold text.

The UN is trying to grab control of worldwide immigration policies*

While President Donald Trump seeks funding for a bordering! wall, the United Nations is seeking control of migration policies worldwide, with a campaign configured to undermine America’s sovereignty and control over its own borders. And, yes, if the U.N. has its way, America will help pay for it. [Bold text Blog Editor]

As with many of the U.N.’s turf grabs, this campaign to co-opt national migration policy has been years in the making. Incremental in its origins, and swaddled in U.N. jargon and procedure, it has largely escaped the U.S. headlines. But it’s now reached the stage of becoming dangerous.

The spearhead of this U.N. campaign is an international agreement with the high-minded name of the Global Compact for Safe, Orderly and Regular Migration. That’s not remotely what this document boils down to. While proclaiming a utopian “unity of purpose” among the 193 highly diverse member states, this Global Compact would have the U.N.’s largely unaccountable, self-aggrandizing and often opaque bureaucracy, operating in service of its despot-infested collective of governments, set the terms for all.

The lengthy text reads like a template for setting up the world’s most politically correct welfare state, with a colossal menu of entitlements and central planning for migrants; never mind the cost to the pockets, rights and freedoms of the existing citizens. This “compact” does not restrict itself to refugees. It anoints the U.N. as arbiter of how to handle cross-border human mobility worldwide, meaning migrants, permanent or temporary, whatever their reasons for wanting to move. In this scheme of the universe, the U.N. proposes to become the overarching authority “addressing migration in all its dimensions.” [Bold text Blog Editor’s]

Coming from a United Nations that has yet to solve its own problems with peacekeeper rape of minors, that’s ambitious.

In a section on eliminating “all forms of discrimination,” this compact also aims to “shape perceptions of migration,” not least by smothering free speech and promoting gags and penalties for news coverage or debate that the U.N., in its collective majesty, deems unfriendly to migrants. [Bold text Blog Editor’s]

This compact was adopted without a vote at an international conference last month in Morocco, in which the U.S. declined to take part. The resulting draft was endorsed on Dec. 19 by the U.N. General Assembly in New York, over U.S. protests.

It is telling that among 193 member states, the 152 countries voting in favor of the compact included such brazen human-rights abusers as Russia, China, Cuba, Venezuela, Myanmar and Iran. The five countries voting no were the U.S., Israel, Poland, Hungary and the Czech Republic. The remaining 36 member states either officially abstained or did nothing. [Bold text Blog Editor’s]

At the U.N., such big vote tallies in favor of U.N. turf grabs are business as usual. In practice, the Global Compact would entail virtually no costs for rogue, despotic or failing member states, which routinely vote for resolutions that they themselves ignore. The main costs would fall on the law-abiding, free countries that provide the most desirable destinations for migrants, and notably on the biggest single contributor to the U.N., the United States. [Bold text Blog Editor’s]

The U.S. Mission to the U.N. denounced the compact, accurately, as amounting to a bid “to advance global governance at the expense of the sovereign right of States to manage their immigration systems in accordance with their national laws, policies and interests.” A U.S. envoy warned that this compact could translate into a “long-term means of building customary international law or so-called ‘soft law’ in the area of migration,” and expressed particular concern that the term “compact” is an amorphous word in international law, “but implies legal obligation.” [Bold text Blog Editor’s]

The U.N.’s rejoinder has been that General Assembly resolutions are nonbinding; participation by member states is voluntary.

Which brings us to the real pressure tactics with which the UN is attempting an end-run around the United States. In concert with a vision outlined in 2017 by Secretary-General Antonio Guterres, the Compact itself calls for the U.N. to set up a sprawling “network on migration,” to embed, coordinate and promote the compact’s methods and goals throughout the U.N. system and around the globe. The UN Terms of Reference for this compact include a preliminary list of 38 U.N. entities already slated to promote this agenda.

The Compact further stipulates that the secretariat and coordinator of this migration network will be a U.N. agency called the International Organization for Migration. The IOM operates with a staff of more than 9,000, in some 150 countries, with a budget of more than $1.4 billion per year, the biggest slice of that contributed by the United States. [Bold text Blog Editor’s]

The kicker is that it was less than three years ago that the International Organization for Migration joined the U.N. For some 65 years before that, it was chiefly led, bankrolled and shaped by the U.S., and served as one of America’s most reliable partners in dealing with migration. Based in Geneva, the IOM was founded in 1951 as an intergovernmental agency — outside the U.N. system. The migration organization was not a policy shop. Its mission was primarily to help with logistics in resettling people displaced in Europe by World War II. That led to it helping migrant populations hit with both man-made and natural disasters, from the Soviet invasions of Eastern Europe, to the Vietnamese boat people, to victims of the Christmas tsunami of 2004, and so forth. The international migration group cooperated with the U.N., but in keeping with longstanding U.S. preferences, it did not join the U.N. The arrangement worked pretty well.

That all changed under President Barack Obama. During Obama’s final year in office, in 2016, with a nod from his administration, the IOM joined the U.N., which promptly declared plans to create a global plan for migration. For 2017, as a parting gift of the Obama administration, America’s $544 million contribution included $1.68 million earmarked for conferences and consultations supporting the creation of the Global Compact. [Bold text Blog Editor’s]

In late 2017, the Trump administration reversed that policy, announcing the U.S. would no longer support U.N. activities leading to the Global Compact. Ambassador Nikki Haley released a statement that: “America is proud of our immigrant heritage and our long-standing moral leadership in providing support to migrant and refugee populations across the globe,” but the U.N.’s global migration project, she said, “is simply not compatible with U.S. sovereignty.” [Bold text Blog Editor’s]

The U.N. pursued the compact regardless, with the IOM playing a major role in consultations and conferences around the globe, including a major preparatory conference in 2017 in Mexico and a culminating conference last month in Morocco. In early 2017, Guterres appointed as his special representative for migration a former U.N. human rights commissioner, Louise Arbour, who worked closely with the IOM to shepherd the Global Compact to fruition and presided at the Morocco conference, which Secretary-General Guterres also attended.

When the IOM elected a new director-general in 2018, the U.S. lost its longtime leadership of the organization to a Portuguese socialist, Antonio Vittorino. An old cohort of Guterres, Vittorino made a career as a member of Portugal’s Socialist Party, and in the 1990s, during Guterres’s tenure as Portugal’s prime minister, served a stint as his deputy. Now they are working together on what is basically a socialist vision for global migration. [Bold text Blog Editor’s]

According to the terms under which it joined the U.N., the IOM is not supposed to shape norms or prescribe policy. The agreement spells out that it “shall function as an independent, autonomous and non-normative international organization.” But that’s not how it’s working out. The precise arrangements within the IOM for its new role as secretariat and hub of the U.N.’s new systemwide migration network are still in flux, according to a spokesman reached by phone in Switzerland. But policymaking looms large, as confirmed by this spokesman: “The IOM is finally after 67 years setting up a policy shop.”

Last year the Trump administration cut off funding for IOM activities specifically related to the Global Compact. The idea was that these could be disentangled from the rest of the organization’s activities, for which a lot of U.S. money continues to flow, most of it voluntary. In 2018, according to IOM budget estimates, the U.S. contributed roughly $448 million in voluntary funds, all but $2 million of that project-dedicated, plus $12 million in assessed dues.

But with the International Organization for Migration now planning its own policy shop and serving as the hub and secretariat for a U.N. migration network to promote the Global Compact, it’s hard to see how any IOM project might escape being entwined with this campaign to undermine U.S. sovereignty. It’s looking ever more as if a good step toward enhancing U.S. border security would be to stop funding the migration organization and spend all those American tax dollars on projects and partners more dedicated to the genuine interests of both migrants and the U.S. itself.

*Claudia Rosett is a foreign policy fellow with the Washington-based Independent Women’s Forum.

*This column was first published in The Dallas Morning News, on January 18, 2019.

The UN is trying to grab control of worldwide immigration policies

Copyright © 2013 | The American Center for Democracy is a 501(c)(3) non-profit organization. Your contribution is tax-deductible to the fullest extent of the law.

The ACD is dedicated to exposing threats to our free speech rights, political and economic freedoms and national security.

ACD is a 501(c)(3) not-for-profit organization. All contributions are tax-deductible to the fullest extent of the law.

ACD fills an important gap created by inadequate risk assessments of our cyberspace, GPS & UTC. We use our Threatcon programs, our multidimensional Terrorist Finance Network Tracker (TFNT), and our experts to better inform government, public and private sectors’ policy makers.

“Lean and agile, ACD/EWI is always ahead of the next threat: cyber attacks, market manipulation , the use of legal structures to inhibit free speech and stifle debate”- Richard Perle, former Assistant Secretary of Defense