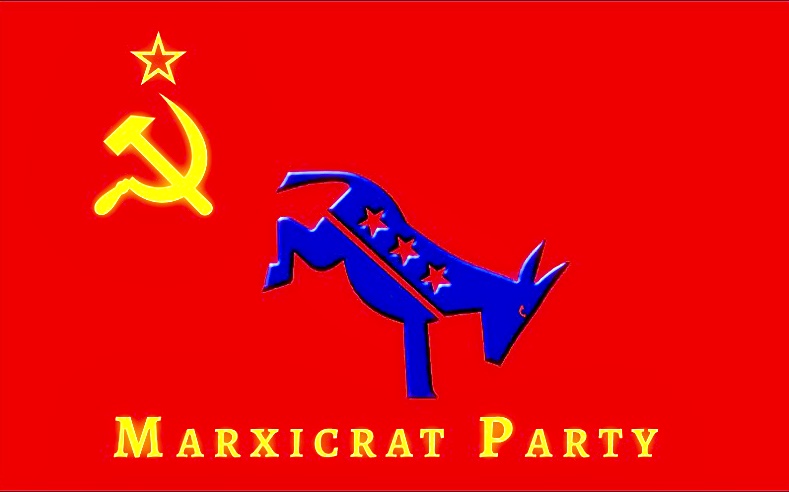 I recently received criticism on a MeWe group for sharing a Justin Smith post entitled “Liberty First and Foremost”. The beginning of Justin’s essay said this:

The Democratic Party has grown to be the enemy within our country, and the communist Democrats working in federal positions are the same as foreign agents infiltrated into federal agencies, seeking to do whatever is needed to end this republic.

Chris Worth at this MeWe group said something to the effect he read equating the Dems to a “Communist” and decided the post was worthless and hence encouraged readers there was no need to read further.

That kind of irked me. So, I quipped he should read the Dem Party Platform to see the Communism dripping from the words.

Essentially Chris Worth called bull and challenged me to show where Communism was found in the Dem Platform.

Responding to Chris Worth of LEFT VS RIGHT~DEBATE IS ON! FIGHT FOR YOUR CAUSE! On MeWe

The Democratic Party Platform is updated every 4 years corresponding to Presidential elections. The 2016 Dem platform true to Socialist/Communist ideology to fool the people, disguises their words to sound appealing, yet when compared to the less likely to disguise Socialist/Marxist agenda of making decisions rather than offering choices is quite apparent. The DNC Platform is 50 pages of disguised flowery promises impossible for the most part to accomplish without bankrupting government and/or taxing “We The People” so heavily that no one will ever manage their own affairs without government –cough– guidance.

Here’s a summary of the 50-page platform with a little added commentary:

Opposes any laws that limit abortion.

Supports the repeal of the Hyde Amendment, which prohibits federal funds from being used for abortion services.

Supports free abortion and contraceptives for all women.

Supports “sexual and reproductive health and rights around the globe.”

Opposes the “global gag rule” and the Helms Amendment that bars American assistance to abortion throughout the developing world.

Supports working with police chiefs to invest in training for officers on issues such as de-escalation and the creation of national guidelines for the appropriate use of force.

Supports requiring the use of body cameras.

Opposes the use of “weapons of war that have no place in our communities.”

Supports a requirement to make the Department of Justice investigate all “questionable or suspicious police-involved shootings.”

Supports states and localities “who help make those investigations and prosecutions more transparent, including through reforming the grand jury process.”

Supports assisting states in providing a system of public defense that is adequately resourced and meets American Bar Association standards.

Supports reforming the civil asset forfeiture system to “protect people and remove perverse incentives for law enforcement to ‘police for a profit.’”

Supports removing barriers to help formerly incarcerated individuals successfully re-enter society by “banning the box” (persuading employers to remove from their hiring applications the check box that asks if applicants have a criminal record). Supports executive action to “ban the box for federal employers and contractors, so applicants have an opportunity to demonstrate their qualifications before being asked about their criminal records.”

Supports, whenever possible, prioritizing prevention and treatment over incarceration when tackling addiction and substance use disorder.

Endorses the use of effective models of drug courts, veterans’ courts, and other diversionary programs that “seek to give nonviolent offenders opportunities for rehabilitation as opposed to incarceration.”

This dreamy sounding police reform if read carefully, smacks of Big Government (i.e. The State, Big Brother, Comrade Leader, World Leader, Alphas, Chairman, Supreme Leader, Führer … Obama) control of local lives. Racism is bad, right? When race baiters begin victimizing the majority, who are the racists. What is the correct view of Social Justice? Is usurping or destroying property to mindlessly equalize a race or the poor for past wrongs of Justice or Injustice (socio-philosophy & Biblical  perspective)?

The Socialist/Communist/Democrat as evidenced by history and recent events spurred on by Dems and their acolytes (e.g. Antifa, Black Lives Matter, Militant LGBTQ, etc.). The so-called reforms for Criminal Justice are code words to enlist the disgruntled to control Americans that still respect the Constitution as the Rule of Law and remember sacrifices that has led America being a great nation.

Supports promoting “racial justice through fair, just, and equitable governing of all public-serving institutions and in the formation of public policy.”

Supports removing the Confederate battle flag from public properties, “recognizing that it is a symbol of our nation’s racist past that has no place in our present or our future.”

Calls for a “societal transformation to make it clear that black lives matter and that there is no place for racism in our country.”

Supports U.S. ratification of the Convention on the Elimination of All Forms of Discrimination Against Women.

Supports adding the Equal Rights Amendment to the U.S. Constitution.

Much of these flowery words are already covered by American Rule of Law. Key terms deceptively slipped in that probably most voters who agree that racism is bad and any form of discrimination against women is bad, probably don’t understand that “sexual orientation and gender identity” mean making the ungodly LGBTQ lifestyle normal ignoring the standard in Christian Morality noting such a life is NOT natural. The Left has used activist Courts for decades to AGAIN … transform society via the non-constitutional path of Leftist Judicial Activism and Leftist media brainwashing.

I’ve had a bit of trouble locating a web page charting American attitudes toward homosexuality. I suspect largely it is anathema to show how much Americans viewed the LGBTQ as a perverse lifestyle. Here is an article obviously supportive of homosexuality going through the “struggles” of being homosexual and the American Rule of Law: Being Gay Used to Be Illegal; 3/27/16.

I have mixed feelings on the old Confederate flag. While it is a symbol of America’s slavery past it is also a period in history which Americans deeply believed in their cause which divided America into its bloodiest war when American killed American (uncannily similar to the present – is there a Civil War emerging?).

Supports the federal government removing marijuana from the list of “Schedule 1” federal controlled substances and to appropriately regulate it, “providing a reasoned pathway for future legalization.”

Supports states that want to decriminalize marijuana or provide access to medical marijuana.

Supports policies that will allow more research on marijuana, as well as reforming our laws to “allow legal marijuana businesses to exist without uncertainty.”

Supports expanding access to care for addiction services, and ensuring that insurance coverage is “equal to that for any other health conditions.”

Such legislation should be along a State’s Rights issue. This is a case that the Federal government observe:

The powers not delegated to the United States by the Constitution, nor prohibited by it to the states, are reserved to the states respectively, or to the people.

Supports the federal government pushing “more colleges and universities to take quantifiable, affirmative steps in increasing the percentages of racial and ethnic minority, low-income, and first-generation students they enroll and graduate.”

Supports “ensuring the strength of our Historically Black Colleges and Universities and Minority-Serving Institutions.”

Supports simplifying and expanding “access to income-based repayment so that no student loan borrowers ever have to pay more than they can afford.”

Supports a student borrower bill of rights to “ensure borrowers get adequate information about options to avoid or get out of delinquency or default.”

Supports the inclusion of student loans in bankruptcy.

Supports a moratorium on student loan payments to all federal loan borrowers.

Supports strengthening the gainful employment rule to ensure that for-profit schools enable students to complete their degrees and prepare them for work.

Supports the Department of Education using their oversight to “close down those for-profit schools that consistently engage in fraudulent and illegal conduct.”

Supports universal preschool for all children.

Supports efforts to “raise wages for childcare workers, and to ensure that early childhood educators are experienced and high-quality.”

Encourage states to develop a “multiple measures approach to assessment, and we believe that standardized tests must be reliable and valid.”

Opposes use of standardized tests that “falsely and unfairly label students of color, students with disabilities and English Language Learners as failing.”

Opposes the use of standardized test scores as basis for refusing to fund schools or to close schools.

Opposes the use of student test scores in teacher and principal evaluations.

Support enabling parents to opt their children out of standardized tests without penalty for either the student or their school.

Supports a national campaign to recruit and retain high-quality teachers.

Supports the use of restorative justice practices that “help students and staff resolve conflicts peacefully and respectfully while helping to improve the teaching and learning environment.”

Supports improving “school culture” and combating “bullying of all kinds.”

Supports expanding Title I funding for schools that serve a large number or high concentration of children in poverty.

Supports increasing sexual violence prevention education programs that “cover issues like consent and bystander intervention, not only in college, but also in secondary school.”

This huge Education summary can be boiled down to reality! For such Education Reforms to take place the classic Communist principle of Wealth Redistribution will be forced upon American taxpayers. For Education Reform in this platform Americans capable of paying taxes will be thrust into poverty. Then OOPS! No more money to steal from taxpayers for the unsustainable Education Reform. Then what? The only way the Dems could maintain control of the government is to terminate the Constitution and institute rule-by-force. Then boom! The Utopian lies turn America into a totalitarian regime giving more to the government telling people what to support, how to believe and ultimately terminate Faith (meaning Judeo-Christian Morality) in favor of a government managed Secular Humanism.

And voters put Obama in Office for 8 YEARS when his agenda was transparently Marxist! MIND BOGGLING!

Says: “We believe in lifting up and valuing the good work of people of faith and religious organizations and finding ways to support that work where possible.”

Now that is a load of lying donkey dung. It is the Dems and Dem supporters that condemn traditional (NOT RADICAL) faith based organizations for standing for traditional Christian Moral Values derived from the Bible (See Also Manhattan Declaration). It is the Dems and Dem supporters that fell in line with Judicial activist Judges who extra-constitutionally changed Constitution of the First Amendment from Freedom of Religion to Freedom from Religion in all taxpayer supported venues (Of interest: The Establishment Clause, Civil Religion, and the Public Church).

Dem Party rejection of faith as the backbone of American culture is evidence of Marx’s Stage Development Theory dream of marching toward Socialism ending in Communism.

Supports the “full force of the law against those who engage in modern-day forms of slavery, including the commercial sexual exploitation and forced labor of men, women, and children.

Supports increasing diplomatic efforts with foreign governments to “root out complicit public officials who facilitate or perpetrate this evil.”

Supports increasing the “provision of services and protections for trafficking survivors.”

If the Dems could ever be trusted in sincerity, this stand would be awesome.

END OF PART ONE

In this current state of media censorship & defunding, consider chipping in a few bucks for enjoying (or even despising yet read) this Blog.