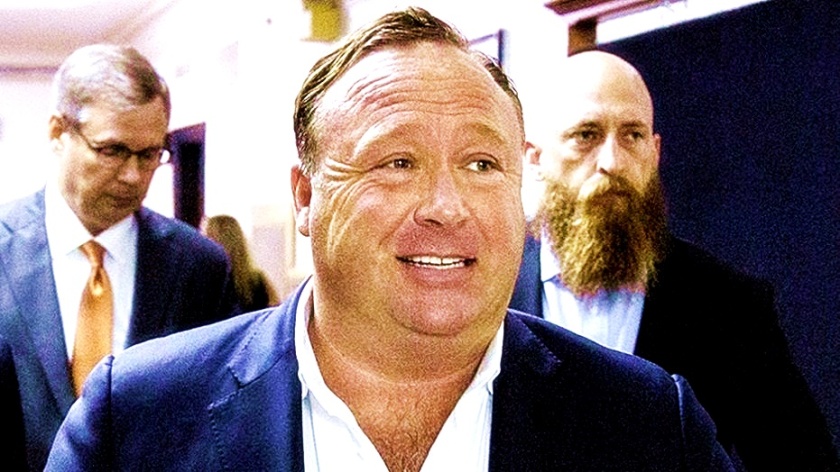 Alex Jones is literally being censored on every digital media format I can think of.

I have to be clear. I am not a supporter or big fan of Mr. Jones. Many of his Conspiracy Theories propagated from his soapbox are just plain outlandish and crazy.

The massive digital censorship Jones is accused of is hate-speech. Frankly, as outlandish and offensive Jones can be I am not surprised the hate-speech accusations are levelled against him.

I do have a couple of problems with the censorship.

ONE: The same media platforms censoring Jones allow Muslims to spew Jew-Hatred and promote physical harm to Jews and other non-Muslims. However, when a non-Muslim points out Islamic tenets and Muslim history demonstrate violent hatred for all things non-Muslim specifying Jews, Christians and polytheists. Militant homosexuals overtly express hatred toward Biblical Values Christians yet will censor Biblical Values Christians for supporting the Bible’s labelling the homosexual practice a sin against God’s Word. In essence this is censorship hypocrisy.

TWO: The same media platforms rarely if ever censor Left-Wing calls for violence against Conservatives yet they will censor Conservatives refuting a violent Leftist agenda. For example Maxine Walters advocating Leftists to disrupt reputed Conservative meetings and Conservatives living their private lives at open-to-the-public venues. Astonishingly to date, Conservative individuals have refused to respond with self-defense violence for Leftist provocation. I’m a disabled dude and I don’t know if I would exhibit such self-restraint to respond with action if someone shouting directly in front of my face.

I hate defending Alex Jones because I am convinced he has used actual hate-speech; however look at some of phrases the digital media platforms label as hate-speech worthy of censorship via banning:

The same article on Forward.com also illustrates actual forms of hate-speech via sexual harassment which is unacceptable but demonstrated on Alex Jones programs.

I don’t know what Alex Jones other than the vague accusation of the kind of speech the digital platforms call hatred or inciting violence:

“… the stated reason for the ban on his content is not defamation but “hate speech” against Muslims, transgender people, and other groups.” (Booting Alex Jones from social media wasn’t wrong, but it could be dangerous; By Cathy Young; USA Today; 8/8/18 9:03 a.m. ET)

If the hate-speech was critical of a belief system corresponding to Islam or the LGBTQ agenda, then said hate-speech violation is an absurd accusation. If Jones said something dimwitted such as maybe, “hunt down the camel jockeys and give them a tasted of their own medicine” or “rope the fudge-packer and drag the shem down the road”. Those kinds of phrases are indeed inciting violence and is a good reason for censuring and/or banning.

Here is the Joseph Farah email (which is also a bit of a fundraiser) that inspired my thoughts.

First, they came for Alex Jones …

I’ve been warning everyone who would listen about the greatest threat to freedom of speech, freedom of the press and freedom of religion in America today.

Instead, the overt attack on America’s First Amendment comes from the corporate behemoth internet gatekeepers who are in ideological lockstep with each other – from Google to YouTube to Facebook to Twitter to Apple to Amazon.

This week, YouTube and Facebook followed Apple’s lead in banishing Alex Jones, the iconic, high-energy voice that rails against globalism and the Deep State daily on radio, podcasts and his own Infowars TV show. He was an easy target and a predictable one – a controversial figure, without doubt, and a high-profile one with a sizable following.

Not everyone wants to defend Alex Jones – certainly not everything he says.

Yet, the First Amendment wasn’t crafted by America’s founding geniuses to protect tepid, non-controversial speech. It was crafted to protect just this kind of fiery dialogue – the kind that offends some people, some sensibilities. Alex Jones is a good choice to start the censorship juggernaut rolling if you think like the Southern Poverty Law Center. And one thing Apple, Google, YouTube, Facebook, Twitter and Amazon all have in common is their love of, reverence for, and partnerships with this extremist band of smear merchants who never met anyone right of center that they didn’t label a “hater,” a “fascist,” a “Nazi” or a “racist” – including, of course, the current president of the United States.

So, first the Digital Cartel came for Alex Jones.

I’m going to defend Alex Jones’ right to say what he wants – even if I sometimes, or even often, find myself in disagreement with him. And I’m going to condemn this cabal of bloated mega-corporations imposing their ideology on America’s most vital public square – the digital media.

Maybe you say, “Well, Farah, don’t these corporations have the absolute right to approve and disapprove of the viewpoints they carry – just like you do?” The answer may be surprising: No, they don’t. None of these conglomerates are publishers, content producers, part of the “press.” They are more akin to “utilities” – like the telephone companies of old, or the electricity producers who have a public obligation to be fair and neutral in offering the services they provide to all, without regard to race, religion and ideology. They don’t have to like Alex Jones. They don’t have to listen to Alex Jones. But if they are going to hold these privileged positions of making lots of money by distributing all manner of content, data and information to the public, they dare not think of themselves as ideological gatekeepers against “offensive” political speech. And they better not designate the disgraced partisan hacks of the SPLC as their content cops, which is precisely what they have done – all of them!

I know I sound like a broken record on this theme, but I’m going to keep pounding on it until the public catches on to the threat these trillion-dollar monopolies pose to America’s precious institutions of free speech, the free press and freedom of religion. We need congressional hearings. We need action in Washington. We need President Trump to recognize who the biggest purveyors of fake news really are. It’s not just CNN and the Huffington Post. It’s their distribution arms – Google, YouTube, Facebook, Twitter, Apple and Amazon – the Digital Cartel.

It’s time to throw down the gauntlet, draw a marker in the sand, file class-action lawsuits, summon our leaders to action.

Are we going to let this cabal render the First Amendment null and void?

I’ve been telling you how they have attacked WND relentlessly and ruthlessly through its politically and religiously discriminatory algorithms. I’ve told you how they have been coming after the independent media, especially since the 2016 election that so disappointed all of them.

Do you really want to talk about supposed Russian interference in our free society when this powerful monolithic cartel is setting the rules of debate for Americans out in plain sight – openly censoring voices they don’t like while systematically elevating those they do like? What a sick joke!

As for me, I will defend the voices of dissent, and even controversy, as long as I have a soapbox upon which to stand. I know they are coming after me and the world’s first independent online news company, which I founded 21 years ago. Once again, I ask you to stand with me, or else find yourself living in a country you won’t long recognize. No privacy. No freedom.

Please support us, or risk finding yourself living in a very different and scary version of America soon.

Help us to raise a much-needed additional $100,000 through August – our biggest crisis period yet, as we battle for survival against the cartel. We’re already nearly 20 percent of the way there, thanks to many of you. You may not be able to give $1,000 or even $100. But everyone who understands the stakes can contribute $10 or even $3.

You can also support WND’s groundbreaking new book, “The Gospel in Every Book of the Old Testament,” with your tax-deductible contributions in any amount to the fabulous missions organization, Gospel for All Nations, which has adopted the project to help spread the truth of the Good News around the world. This book, coming out in hardcover in September, is an important part of WND’s recovery, rebirth and revitalization plan for later this year. Your help with book-printing and marketing expenses will help immensely to weather this storm – not to mention help us distribute this compelling and redemptive “breakthrough Bible book.”

First, they came for Alex Jones …