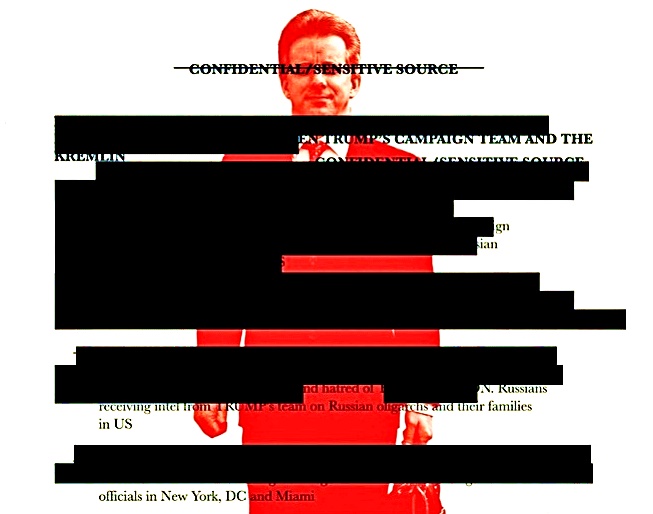 Something Never Trumpers, brainwashed Lefties, overtly lying Lefties and just simple apolitical Americans who get most of news from local networks that are subsidiaries of MSM networks all should know. The FBI pushed the Steele Dossier (or whatever name you choose) as a legitimate source to take down President Trump EVEN THOUGH the FBI discredited Christopher Steele as a legitimate “Confidential Human Source”.

(Washington, DC) – Judicial Watch announced today the FBI turned over 70 pages of heavily redacted records about Christopher Steele, the former British spy, hired with Clinton campaign and Democratic National Committee funds, who authored the infamous Dossier targeting President Trump during last year’s presidential campaign.  The documents show that Steele was cut off as a “Confidential Human Source” (CHS) after he disclosed his relationship with the FBI to a third party.  The documents show at least 11 FBI payments to Steele in 2016 and document that he was admonished for unknown reasons in February, 2016.  The documents were turned over in response to Judicial Watch Freedom of Information Act (FOIA) lawsuit against the U.S. Department of Justice for records of communications and payments between the Federal Bureau of Investigation (FBI) and former British intelligence officer Christopher Steele and his private firm, Orbis Business Intelligence (Judicial Watch v. U.S. Department of Justice (No. 1:17-cv-00916)).

The documents include a “source closing communication” that states that Steele (referred to as “CHS” or Confidential Human Source) “is being closed” because:

The documents also show that Steele was paid repeatedly by the FBI and was “admonished” for some unknown misconduct in February, 2016.  The documents include:

The documents were obtained as a result of a lawsuit was filed after the Department of Justice failed to respond to a March 8, 2017, FOIA request seeking:

“These new docs show the shady, cash-based relationship the Obama FBI had with Clinton operative Christopher Steele,” said Judicial Watch President Tom Fitton. “The anti-Trump Russia ‘investigation’ had Christopher Steele at its center and his misconduct was no impediment to using information from his Russia intelligence collaborators to spy on the Trump team. The corruption and abuse is astonishing.”

Last week, a separate Judicial Watch lawsuit uncovered the FISA warrant documents used to justify spying on Carter Page. The warrants are controversial because the FISA court was never told that the key information justifying the requests came from a “dossier” that was created by Fusion GPS, a paid agent of the Clinton campaign and Democratic National Committee.  Fusion GPS hired Steele to create the Dossier and Steele is referenced repeatedly as “Source #1” in the warrants. The initial Carter Page warrant was granted just weeks before the 2016 election. Steele and his “minimally corroborated” Clinton-DNC dossier was an essential part of the FBI and DOJ’s applications for surveillance warrants to spy on Page.

August 5, 2018- JW President Tom Fitton appeared on “Fox and Friends” on the Fox News Channel to discuss The FBI released 71 pages of redacted documents tied to the bureau’s relationship with Christopher Steele.

[Blog Editor: I can’t figure out how to embed the JW video version watch is about 5-minutes. You’ll have to go to JW link to watch that video. Fortunately I found a 10-minute version on Youtube, but only 1st five-minutes are relevant to this post..

Judicial Watch is a 501(c)(3) nonprofit organization. Contributions are received from individuals, foundations, and corporations and are tax-deductible to the extent allowed by law.

Judicial Watch, Inc., a conservative, non-partisan educational foundation, promotes transparency, accountability and integrity in government, politics and the law. Through its educational endeavors, Judicial Watch advocates high standards of ethics and morality in our nation’s public life and seeks to ensure that political and judicial officials do not abuse the powers entrusted to them by the American people. Judicial Watch fulfills its educational mission through litigation, investigations, and public outreach.

The motto of Judicial Watch is “Because no one is above the law”. To this end, Judicial Watch uses the open records or freedom of information laws and other tools to investigate and uncover misconduct by government officials and litigation to hold to account politicians and public officials who engage in corrupt activities.

Litigation and the civil discovery process not only uncover information for the education of the American people on anti-corruption issues, but can also provide a basis for civil authorities to criminally prosecute corrupt officials. Judicial Watch seeks to ensure high ethical standards in the judiciary through monitoring activities and the use of the judicial ethics process to hold judges to account.