I’m a Baby-Boomer. My parents were teenagers during The Great Depression of the 1930s. Of course that means my grandparents were adults during that trial of economic poverty in America and globally for that matter.

You may have heard the old story from your parents or grandparents (depending on the generation you were born from) about the days they to walk to and from to school up hill both ways in the snow? Perhaps with little clothing or decrepit shoes? With no lunch or perhaps a stale dried biscuit? Though I suspect a little exaggeration to get their point across, this was the Depression era of which they were speaking.

So, what was the point being hammered into my thoughts?

If you want something in life, you have work for it. If you desire a decent future, you have to plan for it. Why? If you are looking for free lunch, you’ll probably starve to death.

Justin Smith addresses this issue of the Leftist preaching of everything must be made free or the end of the world as we know it is upon us. Life DOES NOT work that way.

It Could Always Be Worse

Keep complaining about not having enough. It could always be worse.

Today, we hear so many complain about needing $15.00 per hour and “free” this and “free” that, never understanding that nothing is “free” and someone, somewhere, ends up having to pay for it. They demand free healthcare, free college education, free housing and even free money. Some cities, like Stockton, California and Chicago, Illinois are even considering handing out free money, calling it a “universal basic income” for doing nothing. 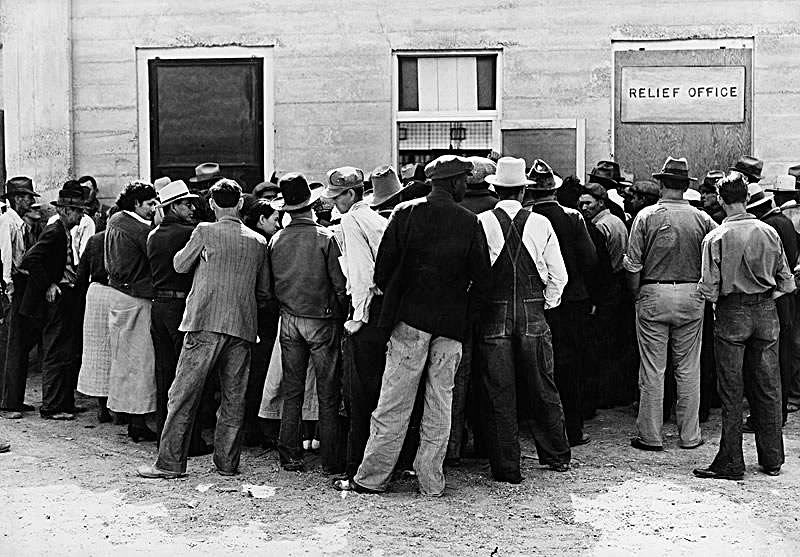 A group of migrants waiting for relief checks outside of building. Calipatria, California. February 1937. Credits: Dorothea Lange; The Library of Congress

The Depression Era and the Dust Bowl Days were terribly hard and tough days. My dad, his siblings and my Grandparents lived through the worst dust storm in U.S. history. They were in Springfield, Colorado, one-hundred and sixty miles north of Amarillo, TX and eighty miles north of Guyman, OK, in the middle of the Black Sunday dust storm of 1935. There were many people who did not make it to shelter in time, and they died after being caught out in it.

The Great Depression itself took a massive toll on everybody. Millions of Americans barely survived those years. The economic collapse was terrifying in its scope and impact. The average family income crashed from an average of $6132.22 in 1929 to just $1550 four years later. In Pennsylvania coal fields, three or four families crowded together in one-room shacks and lived on wild weeds. In Arkansas, families were found staying in caves, while whole families in Oakland, CA were living in sewer pipes.

Incredibly, while there were millions of cases of malnutrition, the death toll from starvation was supposedly surprisingly low, as the government had interceded as best it could and soup lines and charitable kitchens were found in every city across the country. However, millions of Americans did too often come close to the edge of death by starvation, and according to many researchers, starvation deaths were very often attributed to some other affliction, for a litany of medical explanations.

President Herbert Hoover declared: “Nobody is actually starving. The hobos are better fed than they have ever been.”

But, in the New York City of 1931, there were twenty known cases of starvation, and in 1934, one-hundred and ten people starved to death. There were so many accounts of New Yorkers starving that the West African nation of Cameroon sent $3.77 in relief.

Despite the hardships it inflicted, the Great Depression drew some families closer together. They lost their cars and homes, often everything they owned and found their true nature, their true character and their souls. Families had to think outside the box in ingenious manners through the hard times, because their survival depended on it. They moved in with relatives to cut expenses, combined their incomes, bought day old bread and did without many necessities just to scrape by. And, while many people and families placed their faith in themselves and their own dogged determination to survive, many other families drew comfort from their faith and sustained themselves with hope for the future, that everything would turn out well in the end.

Today, far too many Americans no longer believe that our nation’s problems can be solved by people acting alone and through voluntary associations. Increasingly, they look to our federal government, the Nanny State, and currently, there are millions of Americans afforded massive amounts of aid, one-fifth of the population according to the 2012 Census Bureau report.

America’s poor now live better than some “affluent” leaders in Third World countries. They all have government housing and food assistance, along with scores of other programs designed to help clothe and educate them too.

Today’s “poor” are millionaires in comparison to the real poor of the 1930s Depression Era.

And as my Dear Ol’ Lil Granma would tell me, right up until she passed from this world at age 96, “I cried because I had no shoes, until I saw a man who had no feet.”

Embedded source links are by the Editor.

One thought on “It Could Always Be Worse”