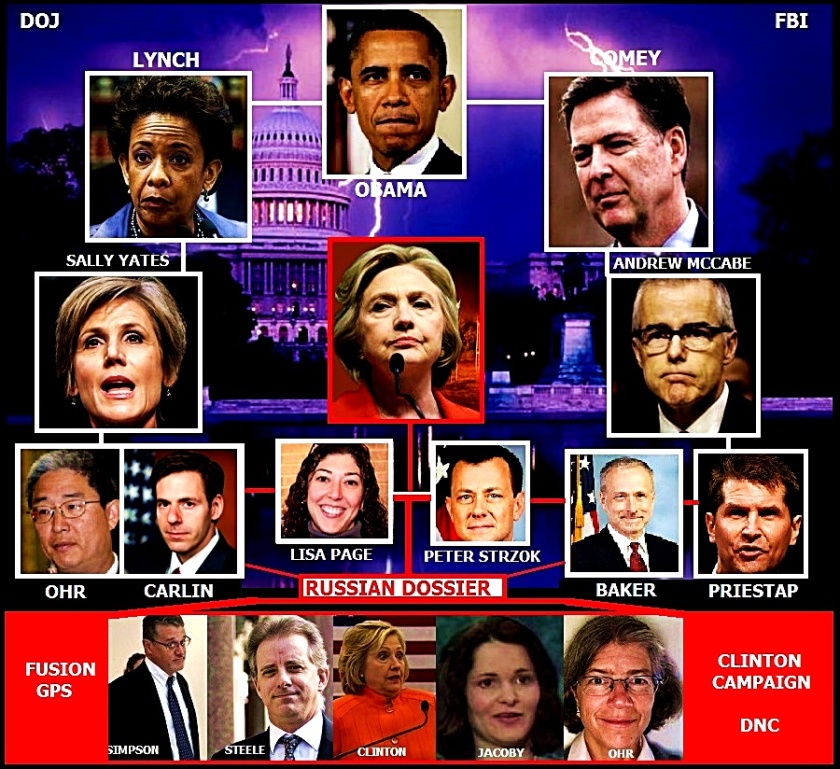 I watched last night’s Ingraham Angle and saw the Ingraham/Nunes interview about the House expanding Congressional investigations into Obama Administration State Department officials’ possible knowledge that the so-called Steele Dossier was a fake put together by the Crooked Hillary campaign to disparage and sink the Trump campaign.

Schiff and Dems ‘Have All This Blood on Their Hands,’ Nunes Says

Democrats “have all this blood on their hands” because they “completely destroyed the FBI and DOJ” by digging up dirt on President Donald Trump in 2016 Democratic presidential nominee Hillary Clinton’s favor, House Permanent Select Committee on Intelligence Chairman Devin Nunes (R-Calif.) said Monday on Fox News’ “The Ingraham Angle.”

“They’re the ones that have all this blood on their hands. They’re the ones who completely destroyed the FBI and DOJ,” Nunes insisted. “How did they do that? They did that by digging up dirt — the Clinton campaign dug up dirt, put it into a dossier, fed it into the FBI. The FBI used our counterintelligence capabilities against a political campaign. That’s what happened here.”

Nunes was responding to accusations Rep. Adam Schiff (D-Calif.), the ranking Democrat on the House Intelligence Committee, leveled against him and other GOP House committee members during an interview on CNN’s “Wolf” last week.

Schiff called Nunes, Rep. Jim Jordan (R-Ohio), Rep. Mark Meadows (R-N.C.) and Rep. Trey Gowdy (R-S.C.) “the four horsemen of this apocalypse” who “have been leading the charge basically to require the Justice Department to give them materials that can be leaked or fed or misrepresented.” Meadows is chairman of the House Freedom Caucus, which Jordan founded, while Gowdy is chairman of the House Committee on Oversight and Government Reform.

“And in the meantime, they do enormous damage to these institutions. Ultimately they’ll be held accountable,” Schiff claimed.

Nunes dismissed Schiff, saying he and the other GOP lawmakers are “not going to be threatened by the Democrats” and will proceed with their investigative plans.

VIDEO: Nunes tightens screws in his probe into surveillance abuses

“So I tend to ignore everything that they say,” Nunes added. “We continue to do our work day in and day out to get to the truth. And gradually we are getting to the truth.”

Information the congressional committees’ investigations have steadily uncovered includes direct evidence of profoundly anti-Trump and pro-Clinton bias within the DOJ and FBI during the Russian collusion investigation, and also in the immediately prior probe of Clinton’s use of a private email server to conduct official business as secretary of state.

Nunes noted that he referred 17 current and former DOJ and FBI officials to Gowdy of the House oversight committee, and to Bob Goodlatte (R-Va.), chairman of the House Committee on the Judiciary.

Nunes also revealed Monday that he referred 10 Obama-era Department of State and White House officials to Gowdy and Goodlatte for testimony about the dossier, surveillance abuse, and other matters.

Congressional investigators “still don’t understand how” and why the Trump-Russia investigation “was opened” in the first place, Nunes said, noting that “many people in the Obama-era State Department were involved in the opening of that investigation.”

Nunes said these reasons are “partly why I am sending these names over to the judiciary and oversight committees, because they already have a task force — the task force has been convened.”

“They should be able to do all of these hearings in the public, full transparency, so that people can watch on live television,” Nunes told Fox News host Laura Ingraham. “But the good thing is that I believe that Chairmen Gowdy and Goodlatte, their task force will interview these people, and they will interview them in public. It will be the first time during this entire investigation that the American people get to see actual questions get answered by these potential witnesses.”

Related: Trump Can Order Rosenstein to Give Docs to Congress, So Why Doesn’t He?

“That is my recommendation to the committee chairmen. I believe they will follow that recommendation. And they may have other names,” Nunes added. “I believe as these hearings take place and testimony is given to the Congress, I think it will be a much-needed sunlight in this investigation. I think the American people will begin to see who is telling the truth and who is not telling the truth.”

Nunes also ripped mainstream media outlets for failing to cover the Obama-era scandals and seeking to “get to the bottom of it.”

“What we’re having to do here as the legislative branch of government — we’re having to do the work that the media won’t do because there are very few in the media who will actually cover this story to try to get to the bottom of it,” Nunes lamented. “That’s part of what’s taking so long. Typically you would have a free and fair and transparent media trying to get to the truth. But in this case we haven’t had that.”

Nunes said he hopes to ensure the American people “know that this is just one more step in the process” of finding answers and achieving transparency.

“I think we’ve been very transparent about how we’ve conducted the process. We’re onto FISA abuse and other matters. I’ve said for a long time that we’re looking at the State Department.”

One thought on “Schiff and Dems ‘Have All This Blood on Their Hands,’ Nunes Says”