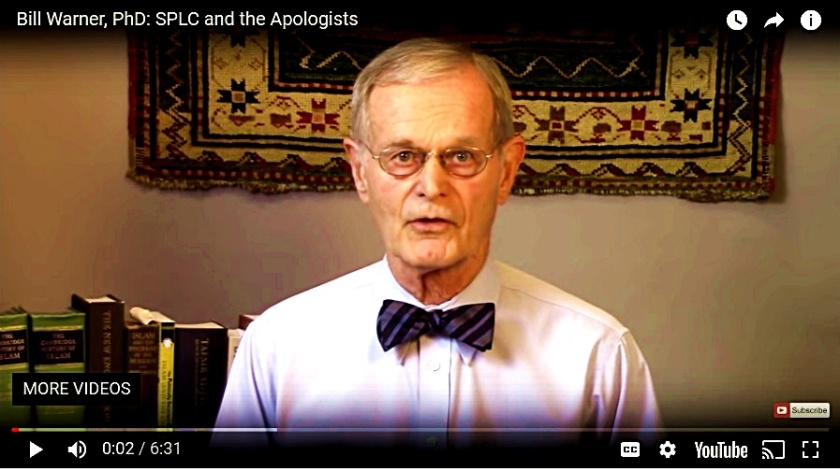 The Southern Poverty Law Center (SPLC) [See Also DTN] might as well be the chief propaganda machine for all things Leftist/Marxist in America. Not only does the SPLC target fringe groups (e.g. KKK, Neo-Nazis, Aryans, Christian Identity, etc.), but they seek to smear traditional Christian/American values organizations.

The SPLC has placed many good and non-violent organizations on a hate list being falsely accused of racism and bigotry while giving a pass to Leftist fringe groups. Bill Warner is one of those targeted by the SPLC. The SPLC would label Warner an Islamophobe racist merely because he shares the truth about Islam.

There was a time in America when freedom of speech was considered so basic that it was rarely talked about. Today “civil rights” organizations such as the Southern Poverty Law Center (SPLC) are devoted to silencing the voices who insist on speaking their minds. The SPLC does not recognize honest differences of opinions, but instead, all who do not adhere to its leftist politics are called “racist-hater-bigot-Islamophobe”. That’s one word, mind you.

The SPLC has found fellow totalitarians in such groups as the Jewish Federation who have turned from tolerance of political differences to attempts to silence dissident voices to Islamic fundamentalists like the Council on American Islamic Relations (CAIR).

As a dissident, I say give me your best shot. No amount of name calling can shut me up.

[Email provides link to a Political Islam post with video]

The Southern Poverty Law Center (SPLC) came to my hometown at the invitation of the Jewish Federation. Now the SPLC is the supreme judge of social morality. The SPLC is the US hate monitor and is the basis for censorship by Twitter, Face Book, Google, and You Tube. I am a racist-hater-bigot- Islamophobe according to the SPLC because I talk about political Islam.

Part of the problem with the SPLC judgment or decree is that there is no due process or redress. There is no way to challenge them. Their purpose is to shame and drive their victims out of business.

The purpose of the SPLC is to censor all those who have different political ideas. They oppose free speech as hate speech. They reject fact based reasoning and critical thought. The Jewish Federation is a partner with these totalitarians. They are joined by the Christians who are apologists for Islam.

The SPLC, the Federation or the other apologists cannot stand a critical view of political Islam. Their only response is that critical thinkers are racist-hater-bigot Islamophobes. Knowledge is bigotry and denial is a virtue.

[Blog Editor: The rest of the Youtube description is the same as the Political Islam post above.]

Center for the Study of Political Islam (CSPI) is an educational organization dedicated to enlightening the general public about the doctrine of political Islam based on the works of Dr. Bill Warner.

Political Islam has subjugated other civilizations for 1400 years. Our mission is to educate the world about political Islam, its founder Mohammed, his political doctrine and his god, Allah.

Islam’s Trilogy of three sacred texts is the Koran and two books about the life of Mohammed. When the Trilogy is sorted, categorized, arranged, rewritten and analyzed, it becomes apparent that five principles are the foundation of Islam.

All of Islam is based upon the Trilogy—Koran, Sira (Mohammed’s biography) and Hadith (his Traditions).

Most of the Islamic doctrine is political, not religious. Islam is a political ideology.

Islam divides the world into Muslims and unbelievers, kafirs.

Political Islam always has two different ways to treat kafirs—dualistic ethics. Kafirs can be abused in … READ THE REST

Join 190 other followers
Follow The NeoConservative Christian Right on WordPress.com