There is a problem in cities spread across Europe with Muslim enclaves. These enclaves are a Third-World Muslim brutality transplanted into Europe. The Muslim brutality is so pervasive that they are often dubbed as No-Go Zones for non-Muslims, too often even applying to police authority.

European Multiculturalist’s most hated Counterjihadist Fjordman wrote the facts back in April 2017:

In January 2015 The New York Times denied that there are “no-go-zones” — areas that are not under the control of the state and are ruled according to sharia law — dominated by certain immigrant groups in some urban areas in Western Europe. The American newspaper mentioned this author, alongside writers such as Steven Emerson and Daniel Pipes, for spreading this alleged falsehood. The article was published shortly after Islamic terrorists had massacred the staff of the satirical magazine Charlie Hebdo in Paris on January 7, 2015. Other established media outlets such as the magazine The Atlantic also dismissed claims of no-go-zones.

Fox News issued an unusual on-air apology for allowing its anchors and guests to repeat the suggestion that there are Muslim “no-go zones” in European countries such as Britain and France.

Regarding the subject of “no-go-zones,” this is largely a question of semantics. If you say that there are some areas where even the police are afraid to go, where the country’s normal, secular laws barely apply, then it is indisputable that such areas now exist in several Western European countries. France is one of the hardest hit: it has a large population of Arab and African immigrants, including millions of Muslims.

In an essay published in February 2016, Stockholm police inspector Lars Alvarsjö warned that the Swedish legal system is close to collapse. The influx of asylum seekers and ethnic gangs has overwhelmed the country and its understaffed police force. In many suburbs, criminal gangs have taken control and determine the rules. The police, fire brigades and ambulance personnel in these areas are routinely met with violent attacks.

In December 2016, the American Jewish documentary filmmaker Ami Horowitz told the story of his venture into Husby. A few seconds after they arrived, five men approached them. They said “You guys gotta get out of here right now.” The film crew, being Swedish, turned around and ran for it. Horowitz decided to stay and try to figure this thing out with the men.

Filmmaker Ami Horowitz recently encountered the all-too-real brutality to be found in a Muslim “no-go” zone in Sweden.

“When they dragged me into that building, that’s really when I thought, ‘They’re going to end my life here,’” Horowitz told LifeZette. Horowitz painted a vivid picture of the extent of the danger of Muslim no-go zones in Sweden — even the police fear them, he said.

As Horowitz noted, liberals love to pretend that Muslim no-go zones — Muslim neighborhoods to which even the authorities are afraid to venture and in which Sharia law is the rule and non-Muslims are attacked on sight — are little more than a figment of paranoid conservative imaginations. But as Horowitz would find out for himself, they are very much a horrifying reality.

“Literally moments after I stepped into the town, a gang of five clearly Islamic men approached my crew, and they attacked me without provocation,” he continued. “They repeatedly punched, kicked and choked me, as a number of bystanders watched. Eventually they dragged me into a building, which at the time I assumed was to finish me off. Once inside the apartment building vestibule, they resumed their vicious attack. But seconds later someone opened an apartment door directly above us, and it luckily spooked them enough to run away,” wrote Horowitz.

While it is nearly impossible to gauge the full extent of the no-go zone problem, it is safe to say there are hundreds of no-go areas scattered throughout Europe. A March 2016 report published by the Hungarian government found 900 areas across Europe.

In France alone, where no-go areas are euphemistically referred to as “zones urbaines sensibles” — sensitive urban zones — the government counts over 750 such zones. In Sweden, the number could be “as high as 50, [but] the police who I spoke with … estimated there to be about 20-30,” Horowitz said.

In the United Kingdom, “you have to have extra vigilance in certain parts [of London] when you are working,” a London police officer told Breitbart News in December 2015. Also in December 2015, a police officer from Lancashire in northern England told the Daily Mail that, “there are Muslim areas of Preston that, if we wish to patrol, we have to contact local Muslim community leaders to get their permission.”

Germany also has its problems with no-go zones. In July 2015, a routine traffic stop in Gelsenkirchen turned into a nightmare when officers tried to carry out their duty. “During the arrest, the two officers were surrounded by about 50 members of a large family who suddenly appeared on the side streets,” local news reported.

The mob tried to intimidate the officers into dropping the arrest, but when that failed, a 15-year-old attacked the officers from behind and started choking one. The situation only returned to calm after backup arrived. “It was only with the summoned reinforcements that the police were able to put the situation back under control and arrest the youthful attacker,” the report said.

“Every police commissioner and interior minister will deny it. But of course we know where we can go with the police car and where, even initially, only with the personnel carrier,” Bernhard Witthaut, then-head of Germany’s police union, said … READ ENTIRETY (Hundreds of Muslim ‘No-Go’ Zones Take Root in Europe; By Edmund Kozak; Lifezette.com; 12/13/16 7:42 AM)

It does not take a rocket scientist that violence and murders against Europeans are largely the end result of carte blanche immigration of Muslims. These same Muslims have not and will not assimilate into the Western Culture. Thanks to the errors of Multiculturalism these Muslims are encouraged to retain the Medieval mentality that Islam is stuck in globally.

These next-gen Muslims then are attracted to the concepts of what Westerners call Radical Islam. Enter Islamic terrorism into a European society that Multiculturalist politicians are in self-deceived denial which if continues, will likely result in the END of Western heritage that will be subsumed into an Islamized continent.

This Multiculturalist idiocy MUST NOT be allowed to metastasize in America! I wish I could use the phrase “not gain a toe-hold” in America, but thanks to the Obama years, Medieval-minded Muslim have already been brought in en masse to enlarge American-hating Muslim communities that have already formed non-assimilation zones in the U.S. of A.

Posted by The Glazov Gang

John Guandolo Moment: The Jihadist-Leftist Matrix Unveiled.
President (“Understanding The Threat”)
—————————————————————–
Please support The Glazov Gang because we are a fan-generated show and need your help to keep going. Make a contribution or set up a monthly pledge. Thank you!

From Minneapolis (MN) to Hamtramck (MI) to Falls Church (VA) to Paterson (NJ) and many other towns and cities across the fifty states, the Islamic Movement is quietly conquering America.

The federal government sleeps, many state governments – including those controlled by Republicans – do their best to accommodate muslims waging Civilization Jihad against America, and the hard-left Marxists – including nearly all of the local and national media – are collaborators in the enemy’s efforts.

As UTT has previously reported, Minneapolis, Minnesota is currently enemy-held territory and will require force to take back. 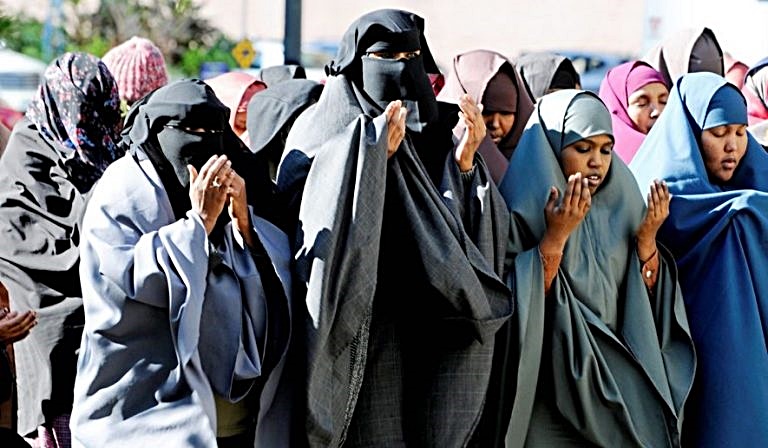 Hamtramck, Michigan is a small suburb of Detroitistan, and is the first town in America to have a majority muslim city council.  This formerly Polish-Catholic town has been overrun by sharia-adherent muslims who have already achieved accommodations for sharia in the community.

Al Qaeda’s Anwar al Awlaki was the Imam of the Dar al Hijra beginning in January 2001 and serving for over a year there.

The community around Dar al Hijra has been taken over by sharia-adherent muslims.  Law enforcement calls the two twin apartment buildings in the area “Taliban Towers,” and the number of jihadis in this area of Northern Virginia, only minutes from the nation’s capital, is significant.

Historically, Paterson, New Jersey has been a melting pot of Irish, Germans, Dutch, Italians, Eastern Europeans and others.  Christians and Jews made a home in this town approximately 20 miles outside of New York City.

Now, estimates put the number of muslims in Paterson at over 30% of the total population.  This number – possibly over 40,000 – makes Paterson, New Jersey the town with the one of the highest concentrations of muslims in the United States.  Many Turks and Syrians are a part of the muslim community, but the majority are Palestinians/Hamas.  Many citizens are concerned for their safety and security.

Muslims on the streets of New York City near Trump Tower on June 1, 2017

What do these four communities – Paterson, Falls Church, Minneapolis, and Hamtramck – have in common? 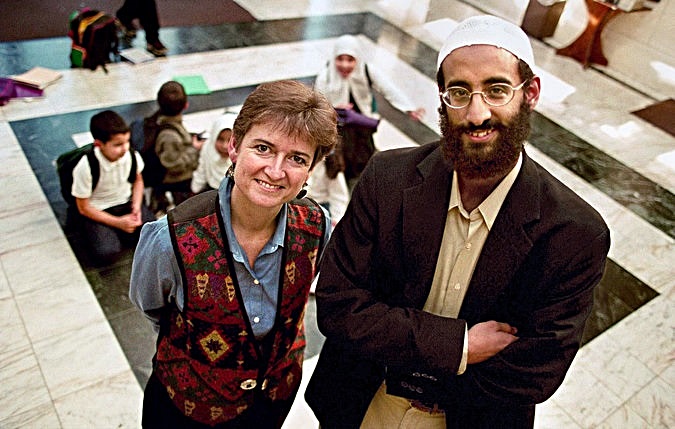 Cities which stand up against this onslaught, at least under the previous administration, find themselves fighting a lawsuit from the Department of Justice and U.S. Muslim Brotherhood groups.  In Bernard Township, NJ the town council said no to Islamic leaders’ request to build an Islamic center/mosque for a number of reasons.  The DoJ and the Muslim Brotherhood’s Islamic Center of Basking Ridge sued and forced the city to allow the mosque be built.

As each day goes by the problem gets worse and the enemy digs in and enhances their fighting positions in the United States.

UTT encourages all Americans to pay attention to what is going on around them in their community.  The enemy is inside the wall.  A muslim representing an Islamic organization has a 99.9% probability of being a jihadi because all of the prominent Islamic organizations in the United States are jihadi/hostile as a matter of fact.  Islamic leaders may give a friendly appearance, but they want what ISIS an Al Qaeda want – an Islamic state under sharia.

What are you doing to prevent your town from surrendering to the jihadis in your community?  Are you holding your leaders accountable?  Are you boldly speaking truth?  Do you understand the threat?

Sheriffs and Pastors are the most important people in this war.  We will attain victory when sheriff’s and their deputies understand the threat and aggressively go after it.  Law Enforcement can only do this if the citizens also understand the threat.  Pastors are the key to ensuring that happens, so they must speak truth in love to open the eyes of the American people.

Multiculturalism Destroying Europe – Is USA Next?

Understanding the Threat provides threat-focused strategic and operational consultation, training, and education for federal, state, and local leadership and agencies in government, the private sector, and for private citizens. UTT is the only organization in America which is training leaders, elected officials, law enforcement, military personnel, and citizens, about the Global Islamic Movement and the jihadi networks in communities around the nation.  UTT is also the only organization showing security professionals and state leaders how to locate and map out jihadi organizations, locate jihadis, and dismantle the network at the local and state level. While UTT briefs and teaches about many of the threats external and internal to the United States, its primary concern is the threats to the Republic and the West in general from the Global Islamic Movement.

John Guandolo is the Founder of UnderstandingtheThreat.com, an organization dedicated to providing strategic and operational threat-focused consultation, education, and training for federal, state and local leadership and agencies, and designing strategies at all levels of the community to defeat the enemy.

Mr. Guandolo is a 1989 graduate of the U.S. Naval Academy who took a commission as an Officer in the United States Marine Corps. He served with … READ THE REST